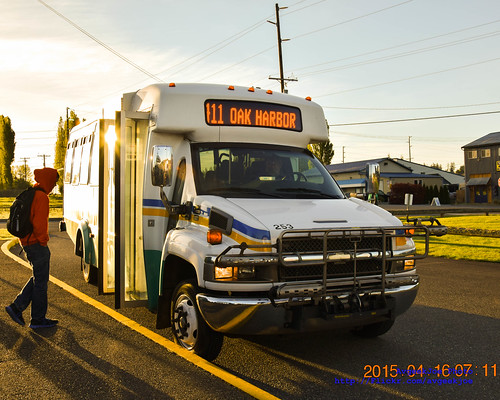 Folks, the future of the Tri-County Connectors is uncertain but I promised you an update.  As you may know, Representative Dave Hayes has put on the table a modest proposal to, “provide $1 million to restart an important bus transit route that, until last June, operated between Camano Island and Everett.”  The catch is that fares must be charged to access the money.

Recently, the Island Transit Board had a discussion about this and is tentatively supportive of Representative Hayes’ efforts:

One thing worth noting is that it’s now 21 April and no final decision has been made even to keep the County Connectors going.   Island County Commissioner Jill Johnson (Republican) is really attempting to force the beginning of public hearings on the service change with more passion and vigor than Island County Commissioner Rick Hannold’s (Republican) pontificating bordering on rambling about the need for a fare.

One should note that come Friday will be 67 days before the possible end of this service.  Sixty seven days.  Yet it seems Island Transit Board has been timid since knowing there was a crisis in November.  At least Island Transit staff have a contingency plan if there is no state support.  If I may quote from my recent feature on the Tri-County Connector crisis:

…These proposed connections are highly problematic.  That’s if Island Transit Board … decides to keep the Island County Connector.  One option, called “Proposal 2” and page four (4) of this Scribd link shows a proposal to only serve Deception Pass.  For Skagit Transit (Skagit County’s county level transit net), they’d have to make it to Cornet Bay to link up with Island Transit at all.

With this Proposal 1 in play thanks to Representative Dave Hayes, the focus should be on commuters.  Doubly so with fares being required to get the $1 million state match for the biennium.  Gone are the days when a $6 million biennium start-up grant could be lobbied for this route.  Make sure to e-mail info-at-islandtransit.org your thoughts on this

But even with the recent fiasco around ORCA & Link Light Rail, I’m sure many of you would agree with Representative Hayes, “Riders need to have skin in the game.  All other transit systems are charging a fare. Many people who were using the Island Transit Everett Connector before it closed told me they would have gladly paid the fare, especially if it would have kept the route open. They’re willing to pay, so this amendment makes that a requirement in order to release those funds.”

Ultimately, let’s hope Friday the Island Transit Board will at least commit to the route and public outreach.  67 days to go… with a state legislature giving signals of going into indefinite deadlock over budgets.

It’s safe to say North by Northwest would have endorsed “Studley” for Mayor based on cleaning Island Transit up and forcing the discussion of new revenue streams to Island Transit.  His looming presence and legacy in the Island Transit debate will be deeply missed.

9 Replies to “North by Northwest 60: Update on the Tri-County Connector Crisis”