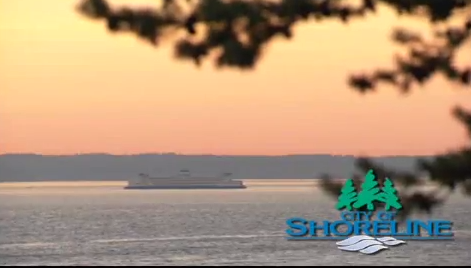 So why does King County make people travel to the far northern county line to challenge tickets they got in Renton, Burien, or Bellevue? According to Tucker’s court assistant, the Shoreline Rule was set up to “balance caseloads” between the nine King County District Court locations, so that no single location gets overburdened. (Prior to 2005, cases were assigned to court “based on location,” the court assistant adds). These days, judging from the orders the court has issued designating locations for various offenses over recent decades, the court appears to pick locations almost at random: If you commit a criminal offense on a light-rail train, for example, you’ll have to show up to court in downtown Seattle; if you violated a Fish and Wildlife law south of I-90, you’ll plead your case in Burien; and if you break a liquor law you’ll join the transit scofflaws up in Shoreline.

Having accepted that King County insisted on my presence Shoreline, I checked out my transit options. King County Metro Trip Planner suggested a convoluted route that involved four buses: the 9 to the 218 to the 41 to the 346, for a total of 76 minutes.

That speaks, in part, to Metro’s sometimes bizarre Trip Planner recommendations (common sense suggests taking the 7 or Link to downtown and then the RapidRide E Line to 185th, but the ride plus the walk won’t be much shorter than Metro’s suggested route), but it also speaks to the fact that both Metro and Sound Transit make it so tough for transit-dependent riders to respond to tickets in person that it may make more financial sense to pay the $124 than take a half-day off work to challenge it. This policy sends a discouraging message to riders: Pay up even if you think we’re wrong, or suffer the consequences by being stuck on a bus for the better part of a day. 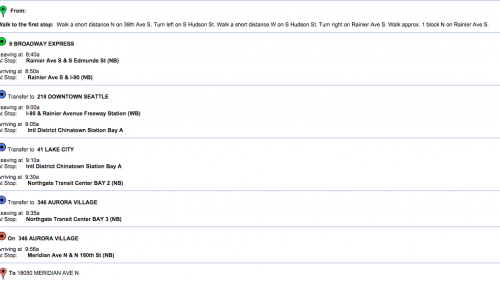 Interestingly, this policy strikes particularly hard at people who ride light rail. That’s because light rail relies on fare enforcement officers to enforce payment of its barrier-free fare, whereas buses rely primarily on drivers to confront riders directly and summon security if a rider refuses to pay or simply doesn’t have their full fare.

Bus confrontation doesn’t usually happen because a) drivers don’t typically want to create conflict with potentially volatile passengers; b) holding a rider while security makes their way to the bus holds up all the other passengers, whereas fare enforcement officers can ticket riders on-board and accompany evaders off the bus or train; and c) many “fare evaders” are simply people who don’t have full fare, a requirement drivers can choose to enforce or ignore at their discretion.

In contrast, Sound Transit’s security officers generally adhere to rigid dictates: If you haven’t paid your full fare or tapped your pass at the station entrance — even if you have already paid the full price of a monthly pass — you get a warning. If you get more than one morning in 12 months, you get a $124 fine. No driver discretion, no exceptions for people who ride every day and therefore open themselves to more potential “fare evasion” incidents in a 12-month period. Just a ticket, followed up by a note in the mail, followed, if you’re really feeling persistent, by a trip up to Shoreline and hopeful vindication.

Or, if you’re like me, you can do this: Go online, type in your citation number, and pay your fine, whether you think you deserve it or not. Pressing “pay” will cost you a $4.99 “convenience fee.” But it sure beats a field trip to the county line.

111 Replies to “The Shoreline Rule”