Back in 2013, Sound Transit introduced a modest pilot project to test permit parking at a few high demand Park & Rides, namely Mukilteo Station, Issaquah Transit Center, Sumner Station, and Tukwila International Boulevard Station. Riders could apply for a space and pay a nominal fee (just $5-$33 quarterly for HOV/SOV respectively, equivalent to 8¢-53¢/day), and in return would be guaranteed a parking space before 9:30am. After 9:30, the spaces reverted to general parking. There was no test of daily parking pricing.

The results of the pilot – which ended last summer – were encouraging enough that Sound Transit will soon ask the Board to proceed with an expanded program. 515 permits were issued (out of 1,427 applications), though just 56 of those (11%) were HOV permits, despite being basically free. Lots were still generally as full as before, though permit holders took advantage of the 9:30am guarantee and took the opportunity to arrive later. Whereas Sumner was usually full by 5:30 am, providing service for only the first two trains of the morning, permits allowed those riders to arrive 1.5-2 hours later. Tukwila Int’l Blvd (TIBS) saw a small decline in usage, indicating that many permit holders didn’t park there daily but were willing to cough up a few bucks for the right to do so a couple times per week. TIBS also saw its peak occupancy shift from 7:00am to 9:30am. So to a small extent, Sound Transit proved the ability to shift customers to later buses and trains, effectively reducing pressure at peak-of-peak. This is a good thing. 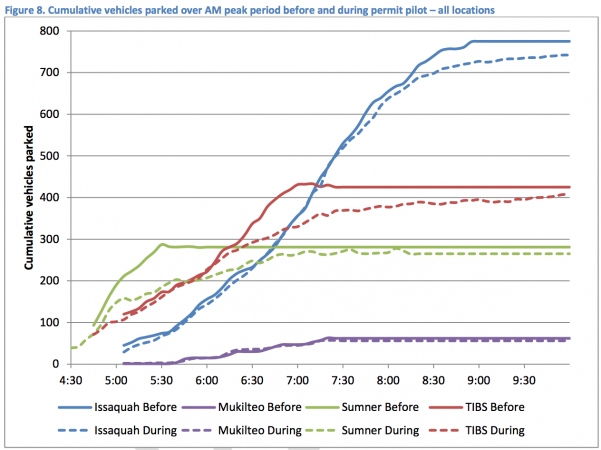 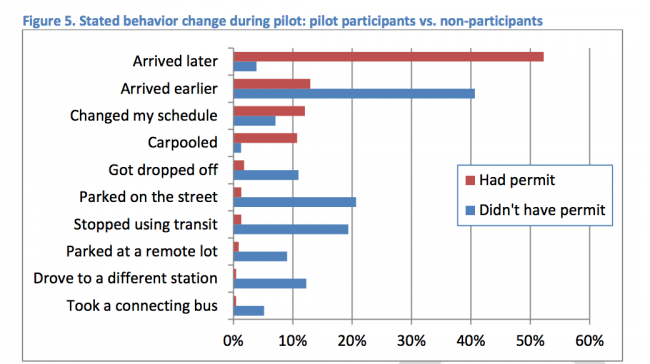 The new proposal would issue HOV permits  in mid-2016 at a nominal fee at an expanded list of Park & Rides, the four mentioned above plus Auburn, Federal Way, Kent, Mercer Island, Overlake, Puyallup, and Angle Lake (which would be unique in having permit parking from Day 1). With Board approval, in late 2016 or early 2017 ST would issue SOV permits at a yet to be determined fee. Whether the fee will continue to be purely administrative or tied to revenue and demand management goals is a policy question for the Board.  All permit applicants would have to prove possession of a valid ORCA card and to renew, prove that they rode transit an average of thrice per week during the previous quarter.

Sound Transit will host a series of info sessions in the coming weeks, and they are also taking input via a short survey. If you believe that managed parking is good policy, please let ST hear from you.