King Street Station’s much needed $55m restoration did much to heal the decades of architectural and functional neglect that had turned the 1906 landmark into a 60s-era eyesore. The expansive waiting room is now beautiful and grandiose in an austere sort of way, the white and beige palette imposing a coldness nicely balanced by the warmth of yellow light.

But aesthetics alone don’t make a good train station. Its primary function is as a transportation facility, to efficiently facilitate human travel while comfortably providing basic human needs such as restrooms, food, drink, and safety. On these counts, there remains much work to be done.

Here are my Top 6 ways to improve King Street.

There is currently nothing for sale in King Street other than train tickets and vending machine soda, and this has to change.  Space activation through commerce improves security and passenger flow, provides needed amenities to passengers, and gives private sector partners a stake in the station’s maintenance and upkeep. The other great West Coast Amtrak stations – Portland and Los Angeles come to mind – are much farther ahead than us at activating their stations. Portland’s Union Station has a small convenience store, a full-service restaurant, and upper floor offices. Los Angeles Union Station has a full-service bar (and a second on the way) in addition to more standard fast food offerings.  The Women’s Waiting Room on the western wall of King Street station would likely make an excellent café, and there is a possibility of a larger restaurant on the upper floors.

2. Fill the Upper Floors with Offices or Restaurants

When the Out of Sight art show recently took over the vacant upper floors of the Station for a temporary exhibit, I wondered about the status of securing permanent tenants for those spaces. I checked in with SDOT’s Bill Laborde, who informed me that the City is preparing another big push in early 2016:

We made a big push last year to market the spaces on the 2nd and 3rd Floor to commercial tenants.  However, we have a big challenge in doing so because there are a minimum of about $1.5-2 million total in tenant improvements that would need to made to all the leasable spaces to make them habitable.  The needed improvements include completing the bathrooms on the second floor, finishing the  historic staircase that accesses the 3rd Floor and completing floor and ceiling work on 2nd and 3rd Floor spaces, as well as any walls the tenant would want to install.  There is probably a pathway for the City to take on the cost of completing the bathrooms and historic staircase.  The Women’s Waiting Room on the 1st Floor could also be completed and used as a space for a café.  There are probably challenges to adapting that space or either of the 2nd Floor spaces for the venting necessary for heavy cooking, though not impossible. We’re preparing to make another big push on leasing these spaces, likely kicking off in early 2016.

Though the City’s preference is for a Master tenant to renovate and manage all 4 available spaces, the city is willing to accept an office use on the 3rd floor and other individual uses on the 2nd floor. Here’s hoping that in the near future something as simple as coffee, a sandwich, and a newspaper will be available. Generating general foot traffic at all daytime hours will improve the viability of private businesses, as they’d be less dependent on the peaks and valleys of train passenger traffic.

Providing access from the station to Sounder would only require allowing passengers to cross Tracks 2 and 3 at the north end of the platform. Such pedestrian crossing of live tracks is very common, for instance at all departures at Portland’s Union Station. Trains on Track 2 never travel to/from the north, so crossing that track is not a safety issue. The pathway across Track 3 would only need to be closed during active train movements, which is roughly 6 times per day:

Having a staffer close the crossing for those 6 minutes per day to allow active trains to clear should be a minor safety and administrative matter. 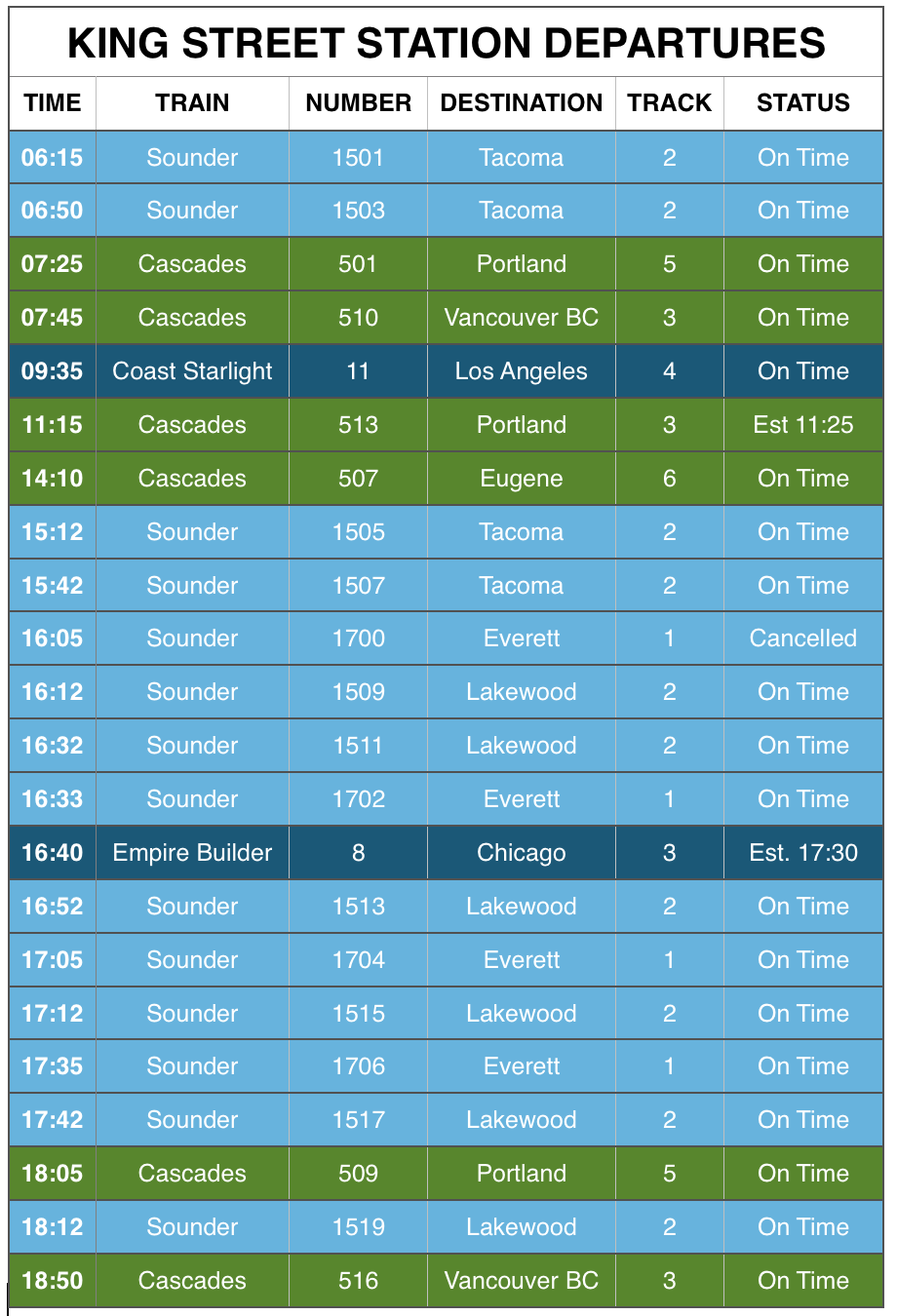 Walking into King Street Station is to walk into an information vacuum. Aside from intermittent, ad hoc audio announcements, there is not a single digital departure and arrivals board, and nothing to differentiate Sounder from Amtrak for the unseasoned traveler. Los Angeles has long had a comprehensive departure board, and Portland’s Union Station has a makeshift digital display alongside their traditional mechanical display, but for some reason we have been content to lack any readily viewable information. But really, how hard could this be? Amtrak already maintains excellent real-time arrival and departure status via its website and app, and displaying it for passengers inside the waiting room should be a basic part of any passenger service.

California’s Pacific Surfliner handles nearly triple the volume of Amtrak Cascades – 2.2m passengers annually compared to our 800k, and it does so with open, unreserved seating. Despite iPhone based ticket scanning and validation, actually boarding a Cascades train still requires standing in a 30-minute line for a seat assignment sticker to be attached to a piece of small sliver of colored paper . As writers such as Matthew Yglesias and the Economist famously bemoaned, there is no reason not to allow open, commuter rail style boarding on Amtrak trains.

Unlike Portland, Amtrak passengers at King Street never have to cross an active track to get to their train, so platform queuing shouldn’t be a safety issue. Though Cascades trains may only open one or two doors at rural stations – necessitating a close grouping of Centralia-bound passengers, for example – this could be accomplished via platform level A-Board signs or by automatic car (but not seat) assignments. Forcing everyone to stand in line airport style makes no sense and worsens the experience for everyone. Imagine if boarding Amtrak were as easy as boarding Link or Sounder? Because it should be! 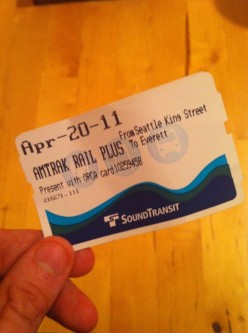 Back when RailPlus was first offered on Amtrak trains between Seattle and Everett, Sound Transit’s Barbara Gilliland called it “one of the easiest agreements I’ve ever worked on.” So why not down south?

Back in 2010 I asked WSDOT’s Vickie Sheehan about allowing ORCA Passholders to ride Amtrak between Seattle, Tukwila, and Tacoma, and she said that there wasn’t enough capacity:

Current demand for travel on the Seattle to Portland route is much higher than between Seattle and Vancouver, B.C. and is growing. Ridership projections do not show sufficient space on trains to make the Rail Plus fare an option to be pursued at this time between Seattle and Tacoma. In fact our projections show that we shall soon be in a position where demand outstrips supply.

Calculating average capacity for a segment is actually difficult, but you can readily get a ballpark idea. In a post a few months ago, I charted Amtrak Cascades ridership by city pair. If you sum the passenger totals for all destinations from a particular city, subtract those deboarding at a particular station, and divide by 4 daily trains, you can get a good sense of how full the train is between any given station:

So each Amtrak Cascades train would be able to accommodate approximately between 35-50 Sounder passengers, instantly providing more de facto mid-day and reverse peak Sounder service without a single easement dollar paid to BNSF. This will make even more sense when Amtrak and Sounder share a platform just a couple years from now. Why not do it?

What else? What would you do to make King Street better?