If you live in Seattle, I strongly encourage 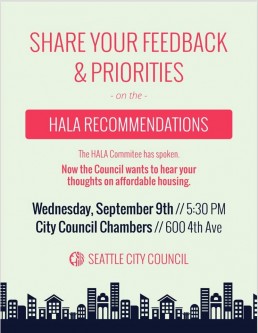 you to show up and listen or comment at tonight’s city council hearing on the Housing Affordability and Livability Committee’s recommendations, which have come under attack from single-family protectionists. Tonight’s public hearing will help the council decide which of the 65 recommendations to set in motion. It will take turnout, support, and continued pressure from urbanists like you and me to ensure they make the right decision and keep the most critical elements of HALA intact.

Iterations of the term “urbanist” have been hotly debated recently (I prefer “reality-based urbanist” myself), but the bottom line is that we all want to ensure that everyone in Seattle–not just wealthy single-family homeowners, not just Amazonian imports, not just those who got here first, but everyone–can live in safe, affordable housing in the city.

This fight is critical, because the council is under tremendous pressure to abandon the very recommendations that will have the most positive impact on affordability. Mayor Ed Murray and several key council members have already abandoned a major, symbolically important HALA recommendation, which would have allowed a greater diversity of housing types (such as duplexes and townhomes) in the 65 percent of Seattle’s land mass that’s currently reserved exclusively for detached single-family homes. Murray, along with council president Tim Burgess and council land-use committee chair Mike O’Brien, walked back their support for that recommendation after angry property owners and neighborhood activists flooded city inboxes with letters of protest and crowded council meetings to voice their complaints about the changes.

I believe that most of the city supports the principles behind the HALA proposals, even if they aren’t familiar with the details, for one simple reason: they provide more affordable housing. Mandatory inclusionary zoning, which would require developers to build affordable housing on site in exchange for the right to build more densely, combined with a new linkage fee on commercial development, would provide 6,000 units of set-aside affordable housing. Other key measures in HALA would expand the boundaries of urban villages to reflect current and future walkability and transit access, increasing supply and limiting the growth of housing costs (which is true no matter how much some progressives insist that supply and demand does not exist).

The opposition to HALA, which has described population growth as a cancer and have suggested single-family homeowners and neighborhood activists should “take back Seattle,” is organized, motivated, and can turn out plenty of people with the means and time to attend midday hearings when most of us are working. Nighttime meetings like this are an ideal opportunity for HALA supporters to show that we, too, deserve a voice at City Hall and in the future of our city.

51 Replies to “TONIGHT: Show Your Support for HALA”