Zach’s report on Mercer Island’s East Link comments was disappointing reading.  It’s clear that not everyone will get everything they want. However, I think there’s a path, assuming goodwill from the major players, that meets a goal that I think regional leaders, interested activists, and concerned Mercer Islanders can all agree on. That goal is that the majority of interested Mercer Island residents should have a plausible means of reaching the station.

There are some challenges:

Although some sacrifices and compromises are necessary, we can achieve the most important goals without vast resource expenditure: 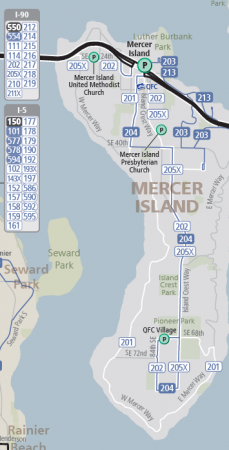 If Mercer Island is genuinely focused on transit access for its residents, it should actively encourage priced parking at the station in exchange for a guarantee that Sound Transit will keep the money on Mercer Island to fund local access improvements. This approach would maximize the number of people that can use the station while keeping parking spaces for those who are hardest to serve with buses.

74 Replies to “A Grand Bargain for Mercer Island”