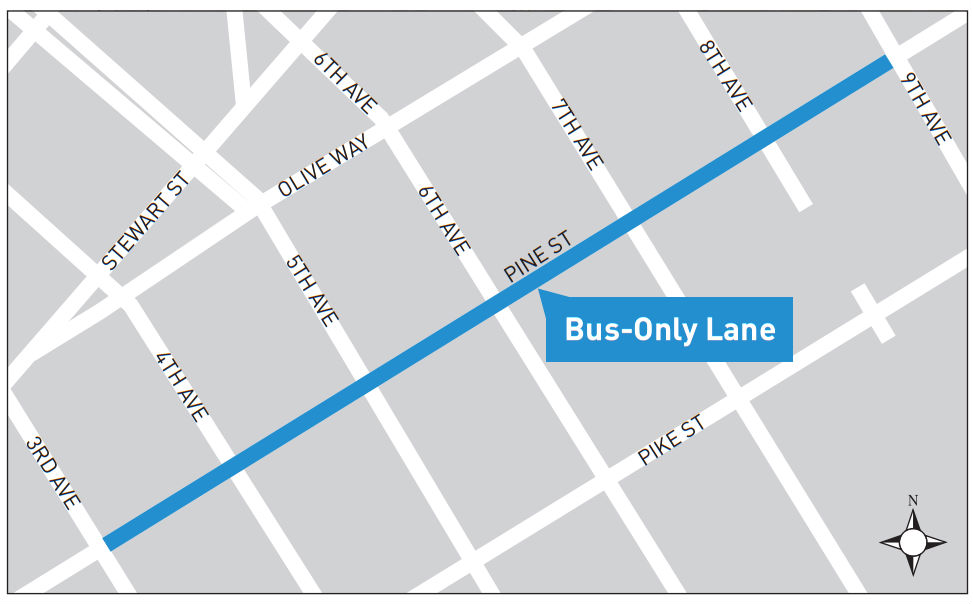 The Seattle Department of Transportation is proposing to install six blocks of 24/7 bus lane, downtown, on Pine St, between 9th Ave and 3rd Ave. The proposed installation will mirror a similar installation on Pike St, between 2nd and 7th, completed last summer: It will be a painting and signage exercise in the right-hand curb lane, with turns permitted. If approved, the lane should be installed this fall. You can send comments on this proposal to jonathan.dong@seattle.gov.

I don’t have much to say on this specific proposal, except “Yes, please do this last year.” Pike/Pine is the primary transit corridor for service between Westlake Station, the downtown core, and Capitol Hill; plus it serves more than half a dozen suburban commuter routes in the peak periods. Riders on these routes deserve all the relief from car traffic they can get. The opening of University Link next year will change the nature of Pike/Pine, making it an east-west oriented corridor, but by no means negating its importance to the transit network.

If this lane is installed as described, buses making the Pike/Pine loop will be have continuous lanes starting west of I-5, with just one problematic gap: One long block southbound on 2nd Ave. Buses here bog down terribly in the afternoon peak, although I’m not sure what can be done about this, given the eventual certainty that SDOT will (and should) extend the 2nd Ave cycletrack north along that block and into Belltown.

Perhaps, then the next area for attention should be the intersection of Pike and Boren, another rush-hour schedule killer. A well-executed BAT lane and queue jump could free buses from traffic, and get Pike St riders quickly across First Hill’s worst car sewer.