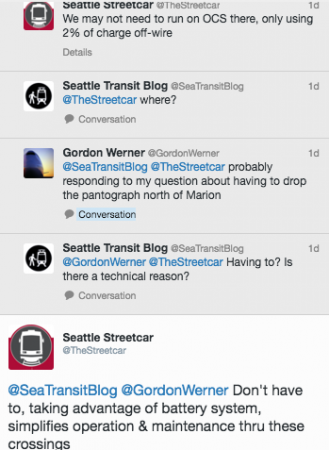 Three quick updates this morning on the Seattle Streetcar network.

1). Portland is getting ready to buy 3 of our used streetcars for the price of 1.

2). After a lengthy closure for Amazon HQ construction, the inbound 7th/Westlake stop on the South Lake Union line has reopened.

3). According to the streetcar’s official Twitter account, the First Hill line may run more of its route on battery power. The beleagured line has been very active in testing the past couple weeks, and we’ve been curious to see the streetcars running on battery northbound in Capitol Hill. We’ve learned that there have been unexpected conflicts with existing trolley wire, leading officials to consider running on batteries from Marion Street to Capitol Hill Station. This would mean the line would run on batteries for 62% of its alignment, but at a additional draw of only 2% of the battery’s charge. Some operators have also said they prefer off-wire operation, as streetcars using the overhead wire must slow to 7mph through all ‘special work’, or major intersections where they intersect trolley wire. Streetcars running on batteries may travel the prevailing speed limit.