Much of the discussion would have been familiar to those who had attended previous SDOT meetings or read the various coverage on the project here, at the Seattle Times, and on The Urbanist. The route will run on Madison street from 1st Avenue to MLK Blvd in Madison Valley, with varying levels of transit priority between 1st and 18th Avenues, and mixed traffic from 18th-MLK. 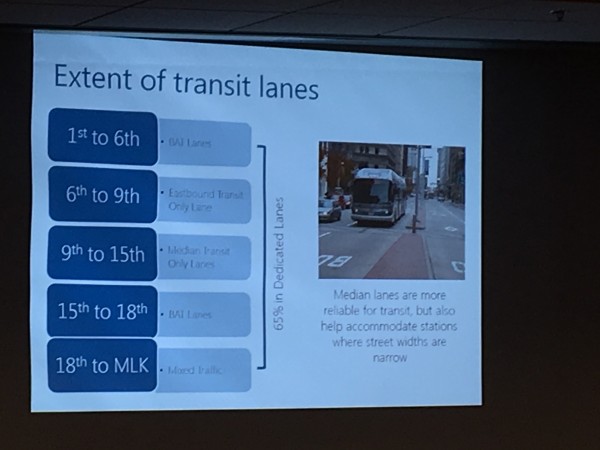 Analysis and commentary after the jump.

Outbound Alignment: Beginning at a shared stop with the Center City Connector (CCC) streetcar on 1st Avenue between Madison and Spring, the line would run uphill on Spring Street in Business Access and Transit (BAT) lanes. Near SPL there would be a shared stop with Route 2, with the BRT line boarding on both sides via an additional island platform. At I-5, the bus would transition to the right hand side, with minor potential vehicle conflicts at the turns from Spring to 8th and from 8th to Madison. Once on Madison, the line would enjoy dedicated center lanes from 9th through 15th, after which there would be a short BAT lane section (15th-18th) followed by mixed traffic for the final .8 miles to MLK.

Inbound Alignment: The story inbound is much the same, with mixed traffic until 18th Avenue, transit priority to 9th, and BAT lanes downtown. The only twist is that SDOT assured the crowd that the bus wouldn’t get stuck in the I-5 queue at 6th/Madison, but instead the bus would stay center-right until across the freeway, and only then running in a right-hand BAT lane to 1st Avenue.

Downtown traffic interactions: Nelson Nygaard stressed that SDOT wanted to retain two general purpose travel lanes west of I-5, which restricted available choices for dedicated ROW. By my count, the downtown BAT lanes will conflict with 8 parking garages and up to 6 vehicle turning movements:

Fleet: SDOT also confirmed that the line will require a new, dedicated trolley fleet, with 60′ articulated trolleys with 5 doors (3 right, 2 left). SDOT staff also said they’ll ask New Flyer to spec a non-articulated 40′ version as well. While this permits left-side boarding, it adds operational complexity to the line and reduces its resilience by eliminating interoperability. SDOT also said that they have no plans to order diesel coaches with doors on both sides, leaving an open question whether or not the line would shut down during maintenance if the overhead were inoperable.

Funding: Move Seattle provides $15m of the estimated $120m cost, or 12.5%. The remaining would likely come from federal grants, most likely Small Starts. 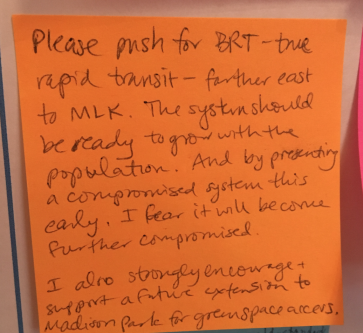 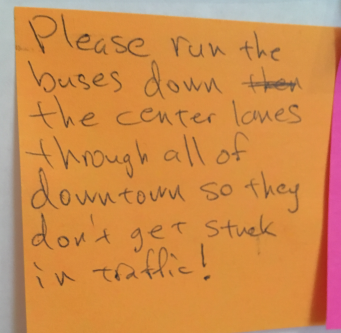 So how should transit advocates feel about this project? Despite any media narratives of “showdowns” or “battles” brewing, first and foremost this would be a substantial improvement on the status quo. Even with the disappointing downtown BAT lanes, the concept goes a long way to reducing the worst bottlenecks (especially near I-5) that kill reliability on Routes 2 and 12 today. Running 60′ buses every 6 minutes Monday-Saturday (instead of today’s 40′ buses every 15 minutes) would be a fantastic 275% capacity improvement. The station-level amenities would speed boarding and beautify the corridor. The center-running section that the First Hill neighborhood fought for would represent a needed paradigm shift for transit priority in Seattle. There’s a lot of good in this project.

But by building a short center-running section, the line locks in all of the operational sacrifices of a closed corridor without fully realizing its benefits. It requires a special fleet that reduces resilience, it likely locks Route 2 onto Seneca in perpetuity, it sacrifices reliability for the sake of 2 GP lanes downtown, and it makes a permanent service planning decision for the sake of ~10 blocks of special right-of-way. It fails to plan for growth in East Capitol Hill, the C.D., and Madison Valley, unwisely relies on an assumption of continued free flowing traffic between 18th-MLK, and gives transit no resilience when collisions or other vehicular blockages inevitably get in its way. Finally, it relies upon a BAT lane solution downtown that consistently fails for lack of enforcement. So while it’s still important to recognize that we’re in the fortunate position of fighting to make a good idea even better, transit advocates still have a lot of work to do as this project evolves.

117 Replies to “Madison BRT Is Good, But Let’s Fight to Make it Great”