This morning, Metro has begun soliciting feedback on a proposal to connect Renton, Skyway, Rainier Beach, Mount Baker, and the International District with frequent service 7 days a week. The proposal resurrects a largely meritorious idea from the old transit cuts packages, merging the southern half of Route 8 (soon to be 38) with Route 106 while bringing the whole line up to 15 minute frequency. It also extends Route 107 to Beacon Hill Station, cuts Route 9 back to peak only, and adds peak trips on Route 124 to make up for some of the lost service in Georgetown. Disappointingly, the proposal also functionally resurrects Route 42 by extending the new 106 from Mount Baker to the International District along Rainier and Jackson. 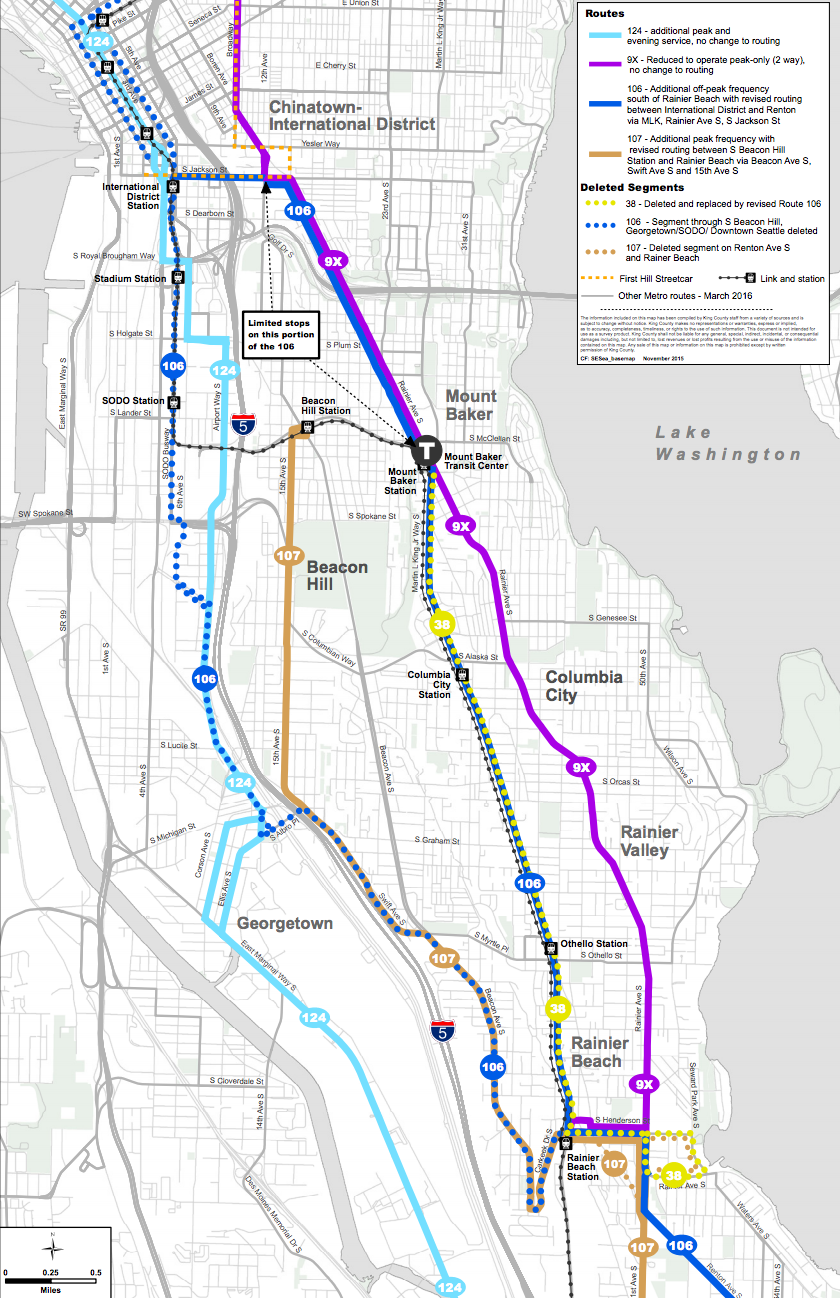 Our relatively painful experiences with Link restructures began with the 42, as Metro struggled to eliminate it upon Link’s opening, despite ridership levels that dropped to less than 175 riders per day. Both Bruce and Martin repeatedly made the case for the 42’s deletion: tied for the worst-performing all-day route in Seattle, riders had voted with their feet, strongly preferring the speed of Link and/or the frequency of Route 7 to the infrequent remains of Route 42. The service cost Metro roughly $400,000 per year prior to its final deletion in February 2013.

But many in the community felt burned by the experience, and Metro began a 3-year process to restructure the network in response to their concerns. This separate process, including a community advisory group, is a large part of why certain routes (such as Route 9) were left out of consideration in the ULink restructure.

This new extension proposal comes with a much higher price tag than the old 42. We estimate that at least 16,000 service hours – $2.5m annually – will be needed just for the International District extension. Is this extension worth it?

In addition to the poor performance of Route 42 between 2009-2013, preliminary analysis shows that riders headed to International District will have a faster, more frequent, and more reliable trip on Link or current bus routes from Renton, Skyway, Rainier Beach, and Mount Baker. Riders that stand to gain from the 106 extension are those headed to Little Saigon from Skyway, intermediate stops on MLK far from a Link station, locations such as Graham Street, or near the Asian Counseling and Referral Services (ACRS), the group that fought most vocally for the retention of Route 42. The current bus stop for Route 8 nearest to ACRS currently serves 41 riders per day.

There’s the additional problem of overlaying frequent routes that have unaligned frequencies, as this proposal would do on Rainier Ave S between Mount Baker and Jackson St. By overlaying a 15 minute service (106) with a 10-minute service (7), the resulting headways are necessarily uneven and can never match the 6-minute combined frequency that “10 buses per hour” would otherwise suggest. It’s simply not possible to run an effective ultra-frequent corridor this way, as it guarantees unbalanced loads, with crush loads on some buses trailed very closely by empty ones. This is de facto bus bunching as a matter of policy, and it’s a waste of valuable resources.

This proposal will add 66% more service to Rainier between Mount Baker and Jackson, but at the expense of leaving MLK riders with 15-minute frequency, missing a huge opportunity to improve transfers to Link (which operates every 6-10 minutes). Imagine a Rainier Valley in which Link, Route 7, Route 48, and Route 106 all ran every 10 minutes, all day, 6-7 days a week, with a single transfer point at Mount Baker. That network would be possible for the same amount of money on the table, if Metro were to invest in MLK frequency instead of adding a 4th route between Mount Baker and the International District.

The end goal isn’t an idealized grid that makes wonks happy, but a better transit network that offers more options, for more people, more reliably. I believe that this proposal does many good things, but the International District extension of Route 106 isn’t one of them. It keeps us further from the goal of a ultra-frequent network in SE Seattle, it wastes its highest frequency segments with uneven headways, and it resurrects a route for which there are very few unique destinations. By all means invest this kind of money in SE Seattle, but let’s find ways to do it better.

Take Metro’s survey here. Responses are due by December 23rd.