[CORRECTION: We mistakenly asserted that Metro did not test the feasibility of the 19th Avenue turn prior to implementing the Route 11 change. Metro replied by email to stress that they did test the turn, it failed, they requested street improvements from SDOT, the restructure passed, and then SDOT denied the request. We regret the error and the original post has been updated below.]

The saga of restructuring bus service for University Link continues this week, with Metro transmitting the official restructure details in two packages (A and B). These packages are the marching orders needed for each department (marketing, facilities, operations etc) to implement the changes in time for March 2016 service change. There are lots of small changes in these packages, and we’ll cover the rest of them in a subsequent article. But the big news isn’t in these packages, because it’s a non-change: the Capitol Hill restructure is basically dead.

Due to the technical inability to make the 135° turn from East Madison to 19th Avenue, Routes 8 and 11 will no longer move to 19th Avenue and E Thomas St, but will continue on their current routings, with Route 8 on John/Thomas and Route 11 on Madison/Pine (though Route 8 will still split from Route 38 and get a boost to 12-minute frequency). As an “administrative change” – in which no stop is more than a half mile from its current routing – the 19th Avenue deviation was neither part of the restructure as adopted by Council nor released for public feedback. We are told that its inclusion met political objectives to secure Council votes, but Metro approved the proposal without SDOT approving the necessary street improvements, which SDOT subsequently denied after the restructure was passed.

Analysis and lamentations after the jump.

Astonishingly, despite a year of public process for a project called “Link Connections,” fewer neighborhoods will have connections to Capitol Hill Station after the restructure than if they had left the network untouched. As a refresher, the excellent Alternative 1 would have provided approximately 25 buses/streetcars per hour to Capitol Hill Station from all directions, including First Hill, Madison Park, Summit, the Central District, and more. Even some of the weaker alternatives, such as Alternative 3, would have provided a connection from East Capitol Hill to CHS via 19th Avenue and E Thomas Street on a restructured Route 12.

We are ending up with a worse version of the universally panned Alternative 2. To jog your memory, Alternative 2 was a status quo alternative that mostly left the network alone except for reducing Route 43 to all-day 30-minute frequency and moving Route 9 to terminate at Group Health for extra frequency between 15th Avenue and Link. But now we’re getting Alternative 2 but with neither an all-day 43 nor adequate service between Capitol Hill Station-15th.

There are some good changes remaining, especially 10-minute frequency on Route 49 and the needed split of Route 8 at Mt Baker. But without Route 11 serving Capitol Hill Station, the net effect of this restructure in East Capitol Hill is a substantial service cut, with Route 43 cut back to peak-only, service from Downtown to Olive Way and Summit being reduced to just the lifeline 47, and a redundant glut of 15 buses per hour continuing down Pike/Pine into Downtown Seattle. Without any near-term provision for improving traffic on Denny Way, Route 8 will now be the only route connecting to Capitol Hill Station from anywhere east of Broadway. Transfers at 23rd and John will be frequent but uneven, with total all-day service on 23rd north of Madison reduced from 8 buses per hour to 6, and all-day service on John/Thomas reduced from 8 buses per hour to 5.  In fact, given the likelihood of a ‘soft open’ for ULink prior to the restructure, it is sad that the best bus access many residents will have to Link in the first few days it’s open. 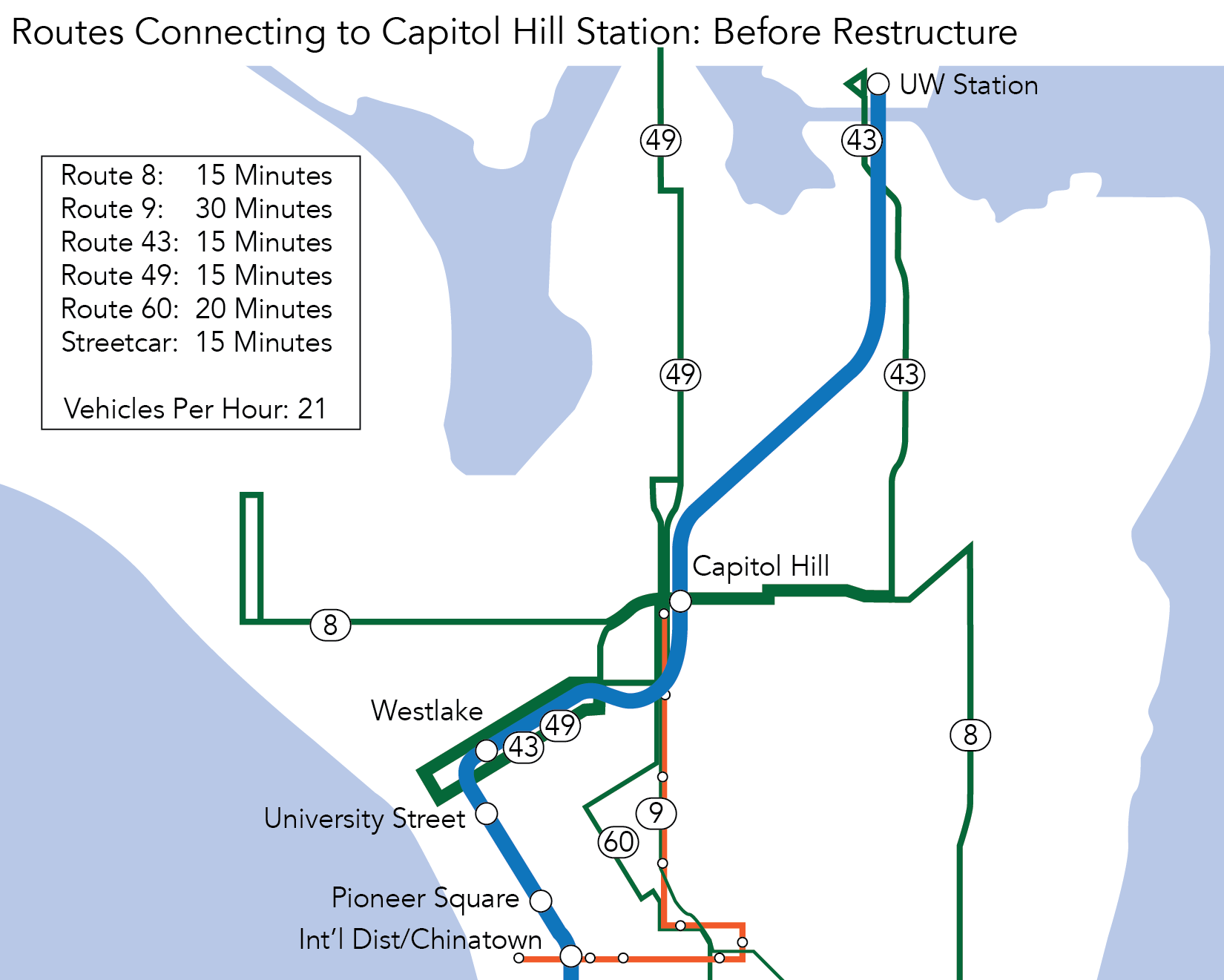 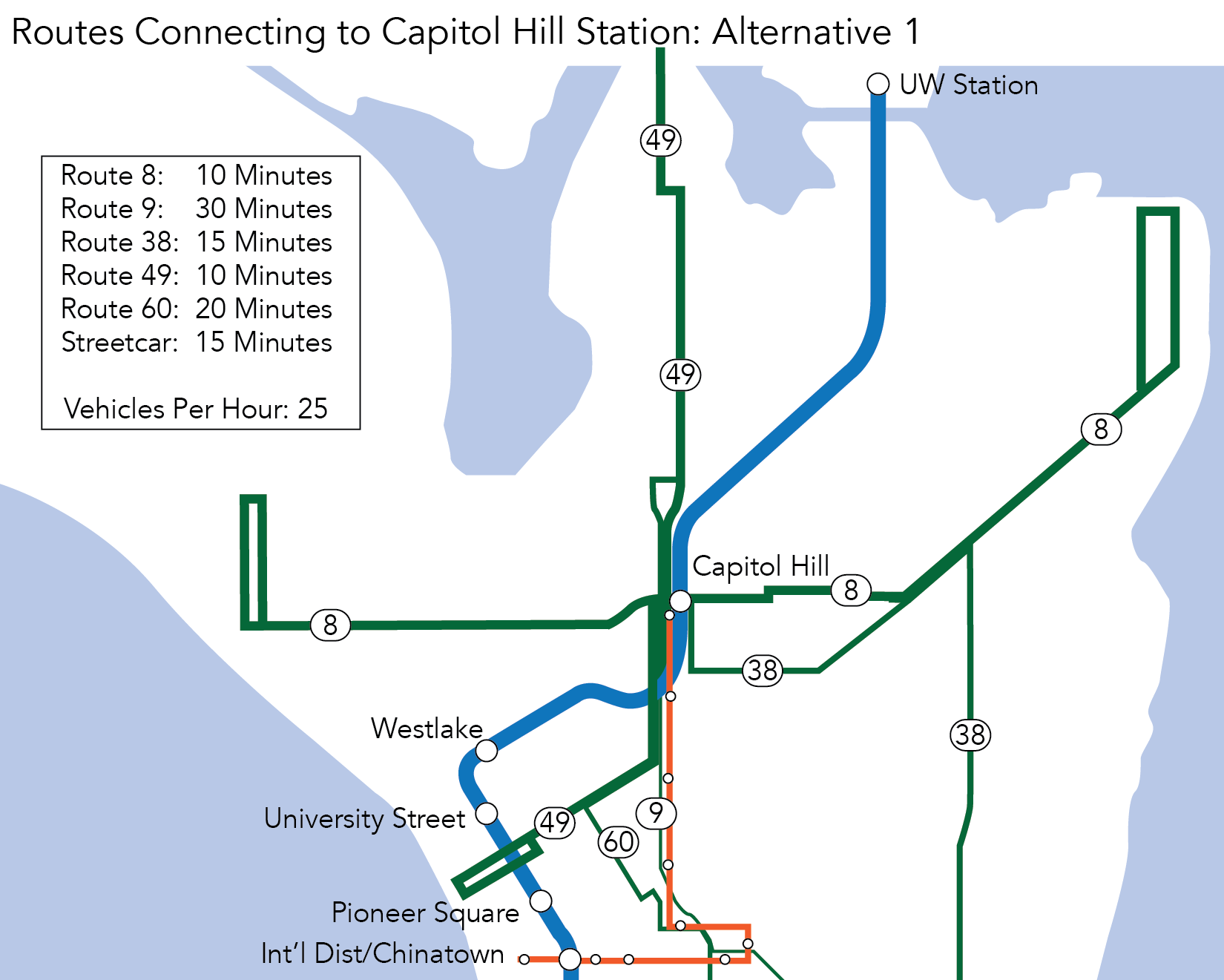 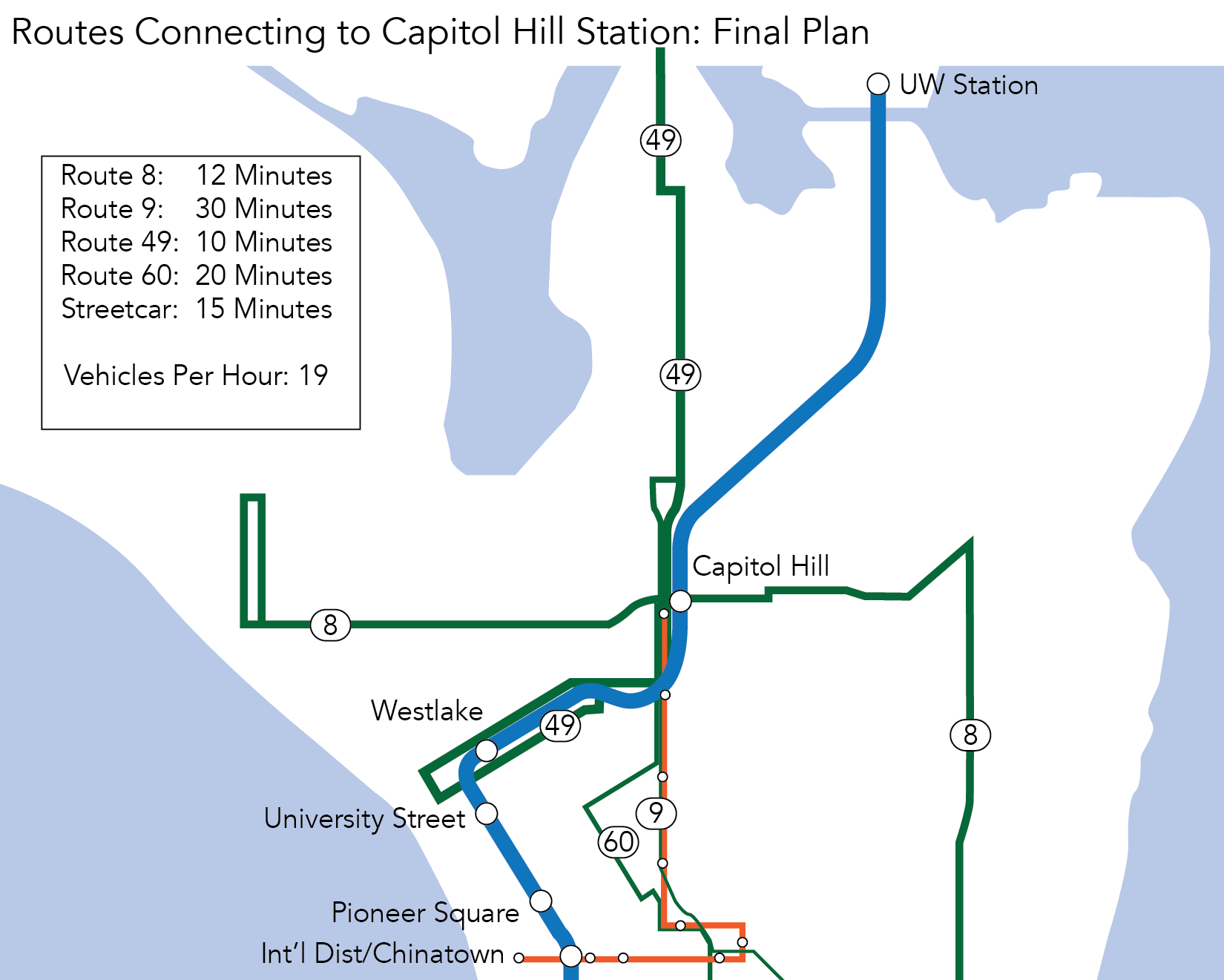 A Failure for Agency Integration

Taken in totality, this process has been a disappointing failure in Capitol Hill, with good network proposals being progressively degraded by the loudest neighborhood voices. County Executive Constantine’s big push for integrated agency planning is off to a rough start, as this process has been a strong illustration of structural interagency problems creating absurd outcomes: Metro seems unable to sustain substantive improvements through public process, and Sound Transit is almost entirely powerless to improve transit access to its ‘neighborhood’ Seattle stations (including the Rainier Valley, Capitol Hill, and soon Roosevelt). We must learn from this quickly, both to quickly fix the mistakes made for ULink and to resolve not to repeat them when Northgate Link opens.