While we wait for ULink’s opening date to be formally announced, I thought it’d be good to share ULink’s weekday schedule so riders can start planning their new trips for late March and beyond.

Though the official schedule hasn’t been published, Sound Transit spokesman Bruce Gray confirmed that there will be no new net service to existing stations, as ULink will extend service to Capitol Hill and UW using the same frequency and span of service Link currently offers. This allows us to extrapolate ULink’s full schedule from the existing one (see Excel file here for the full schedule). With the Sodo base being the only Operations and Maintenance (O&M) facility until 2023, much of the same schedule dynamics will likely endure until East Link opens.

The first 3 southbound trains will still originate in Beacon Hill, with the first train of the day (4:22am) remaining a ‘sweeper’ train limited to 25mph. The first UW to SeaTac train will depart UW at 4:49am.

The first 4 northbound trains will originate in Sodo and run every 12 minutes to UW between 4:48-5:24am, with the first SeaTac to UW train departing SeaTac at 5:04 and arriving at UW at 5:50am.

The duration of 6-minute peak service will vary depending on the station, as peak service will start earlier in the southbound direction and end later in the northbound direction. For example, riders at UW or Capitol Hill headed Downtown will see 6-minute service from roughly 6:00-8:30am and 3:00-6:30pm, whereas riders headed from Downtown to Capitol Hill or UW will see 6-minute service from 6:00-9:30am and 4:00-7:30pm, respectively. Beacon Hill and Rainier Valley riders headed to the airport will continue to have a frequency bonus afforded by being near the O&M facility, with 6-minute service starting at 5:30am.

The last trains of the day will be 12:34am from UW to SeaTac, and 12:04 from SeaTac to UW. The last 3 northbound trains will continue to terminate at Beacon Hill. 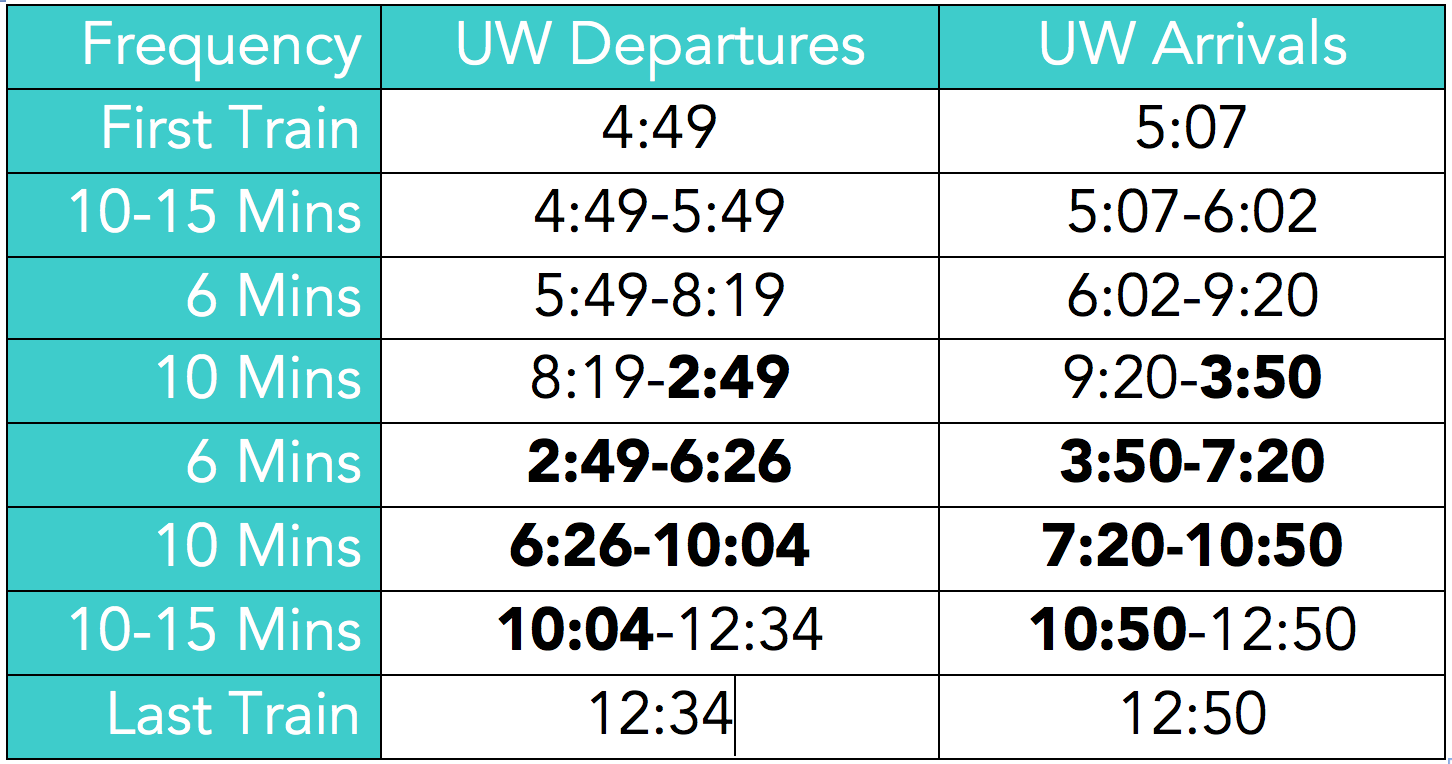 Assuming planned bus routes keep their same frequency and span, once Capitol Hill Station is closed Route 49 will continue running every half hour until 2am, while Route 10 will run one or two additional trips beyond Link’s closing time. Once UW Station is closed, the only access to either Downtown or Capitol Hill will be for riders to walk to 15th Avenue NE to catch Route 49, whereas current Route 43 runs at least every half hour until 2:30am (though primarily because trolley coaches are deadheading in service back to base). In fact, many of those coaches will likely still be deadheading to base as Route 44 along the Route 43 pathway, and it may be worth exploring running those routes in service to continue late-night service between Montlake and Capitol Hill, as the marginal cost of doing so is very low.

It will remain to be seen how other connecting routes at UW Station will be handled for first and last trains, but hopefully major routes replacing the 70-series will have timed connections that afford riders at least the same span of service they enjoy today.