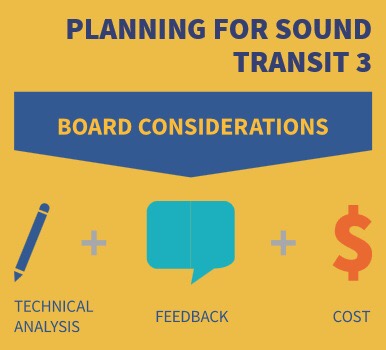 Seattle Subway has submitted comments related to the Sound Transit 3 comment period that ends today for organizations and local governments.  As a signatory to the Transit Access Stakeholders letter to the ST board, Seattle Subway strongly supports the principles endorsed by this broad cross-section of community organizations.

As the Sound Transit Board develops a system plan over the coming months, we want to detail certain actions and choices that will be critical to fulfilling these broadly-supported goals.

Our additional recommendations to the board are as follows:

2. Provide a light rail connection between Totem Lake, Kirkland, Bellevue and Eastgate in ST3. Unlike E-03, this connection must provide stops in downtown Bellevue without requiring downtown users to transfer at Wilburton Station.

3. Include contingency lines in ST3. Our well-run transit agency can deliver projects under budget. We have seen this during the construction of University Link and further such opportunities are likely to arise even after we put a robust plan to voters. Good project management, along with local, state and federal grant funding over the course of the program can be used to build a more comprehensive system. Contingency lines could make the following possible if additional funding becomes available:

4. Study Ballard to Lake City now. As a robust investment is considered, it may be possible to fully fund Downtown Seattle to Ballard to UW as a single line. If contingency lines become possible, then the question becomes, “what’s the next investment?” Density, demand, and social equity point to serving the NE portion of Seattle with light rail, connecting to BRT serving 522 from Lake City through Lake Forest Park, Kenmore and Bothell to Woodinville.

6. Sufficiently fund the Downtown to Ballard Line to go under the Ship Canal (C-01c) from day one. Ballard to downtown will eventually connect to an East-West line serving Ballard to UW (C-02).  Therefore, tunneling under the ship canal has the following advantages:

7. Serve Belltown and Denny Triangle, South Lake Union and Uptown in ST3. This would require creating High Capacity Transit (HCT) connections for Belltown and Denny Triangle in addition to the baseline provided in the Downtown Seattle light rail tunnel plan (C-01c). As the second-densest neighborhood in Seattle, foregoing a well-planned, robust transit connection for Belltown would be a short-sighted decision that will require expensive corrections in the future.

9. Serve the entire West Seattle corridor with appropriate investment. Our high capacity transit in West Seattle must be entirely grade separated and reach White Center and Burien (via C-03a and C13). Importantly, the Delridge corridor must also be served with two stops on this alignment, at the north end and south end.

10. Forward Compatibility. All stations and lines should be built with an eye toward future expansion. Future completion of the long range plan should not require suspension of service on existing lines simply because station expansions or junctions were not planned or funded when the original station/lines were built.

11. Study Funding. Funding of a study for an extension from Belltown through South Lake Union to Capitol Hill, First Hill and the Central District must be included in the ST3 plan. This routing is colloquially referred to as the “Metro 8 Subway” by many as it mirrors the high-ridership, reliability-challenged Metro bus line 8 in many respects. This line would create the density of urban HCT connections the City of Seattle will need in the future.

These options represent what we believe are best courses of action to serve the entire region with the robust transit solution that voters are yearning for and our job growth and transportation challenges demand. We request that they be given proper consideration and inclusion in the final ST3 system plan and November ballot measure.

160 Replies to “Achieving a Robust Transit Solution in ST3”