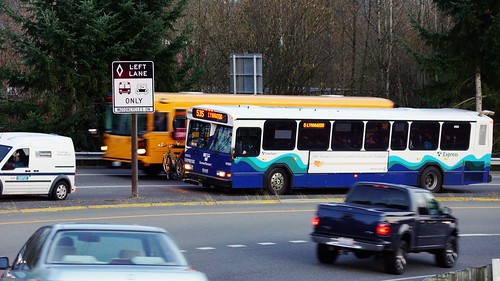 In the race to pander to people that object to any genuine escape from congestion, Jay Inslee’s latest entry is more of the same old thinking ($):

He is advocating two projects:

• Adding a lane on I-405 at Highway 520 to Northeast 70th Place in Kirkland, where it would become an exit-only lane. Costs might range from $5 million to $30 million, based on noise reduction and fish-protection needs.

• Strengthening the right shoulder of northbound I-405 in Bothell for use as a general lane beginning at Highway 527 and ending as an exit-only lane onto Interstate 5 at Lynnwood. It would open to traffic only in peak times, and at speeds far below the usual 60 mph freeway limit, as announced previously by tolling director Patty Rubstello. Costs could range from $30 million to $50 million.

The bottleneck on I-405 used to be in Kirkland. The addition of new lanes did what highway expansions always do: it simply moved the bottleneck around, in this case to the 522 interchange. So now Gov. Inslee wants to double down on this with further quasi-widening. The outcome is predictable: the added volume will simply create bottlenecks elsewhere, either on I-5 or on the arterials that feed 405. Adding an exit lane in Kirkland will simply bring the congestion back to Kirkland. Drivers who use the old bottleneck will benefit, and drivers that use the new bottleneck will be worse off. There will be calls for more asphalt, and the cycle repeats.

Not to be outdone, presumptive Republican gubernatorial candidate Bill Bryant “bested” Inslee’s knee-jerk highway widening by proposing to force the buses back in congestion:

Opponents including GOP challenger Bill Bryant are seizing on toll snafus in an effort to weaken the incumbent. Bryant called for “freeing 405’s HOT lane” by converting one of the two special lanes each direction into a general traffic lane, then allowing two-person carpools into the only toll lane for free. That would likely unravel the toll program, as there wouldn’t be much room left for toll payers to join the bus-carpool lane.

After applying the Bryant plan, the I-405 project would ultimately simply add a general-purpose lane and leave buses and vanpools in status quo congestion. As always, we’re only an election away from squashing the region’s halting progress towards good BRT.