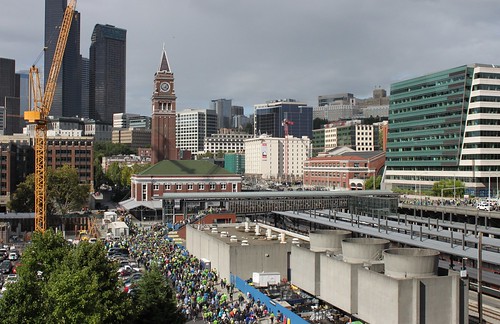 March is nearly here, bringing with it the arrival of spring, minor and major service changes, two new Link stations, and the return of Major League Soccer after the winter off-season. Sound Transit is continuing its annual tradition of offering special weekend Sounder round-trips to and from King Street Station in Seattle (a short walk from CenturyLink Field) for 13 total Sounders FC home games, a slight increase from the 10 trains offered in 2015. Only one weekend home game, the September 17 match against the Vancouver Whitecaps, will not be served by Sounder; instead, the BNSF crews will be busy serving the Washington State Fair in Puyallup on that day.

Sounder trains arrive at King Street Station approximately 1.5 hours before kickoff and depart 35 minutes after the end of the match. Sound Transit has published a full schedule with departure times from each station that correspond to the listed kick-off time.

Bold entries indicate homes games that may have full-stadium seating, bringing attendance above the standard 40,000. Weekday games are omitted, as they do not have Sounder service.

The Sounders kick off their 2016 MLS season on Sunday, March 6 at home against Sporting Kansas City, whose stadium has no weekend evening transit service.

Special events service, including those offered for the Seattle Seahawks and the Puyallup Fair, carried 111,988 boardings in 2015 on both lines. Last season, the Sounders weekend home games generated more than 16,613 total Sounder trips, averaging 1,846 per match.

This season is also notable in being the first with the First Hill Streetcar in service, which directly serves Occidental Mall, the site of March to the Match; Capitol Hill Seattle reported that streetcar service during the February 24 Champions League match against Club America, which drew 42,853 people, was without major issues despite a car crash blocking the tracks early in the evening. The addition of University Link on March 19 (in time for the 2nd home match of the season, vs. the Vancouver Whitecaps) will expand access, as Link already serves CenturyLink Field with two stations (International District/Chinatown at the north end, and Stadium at the south end).

EDIT: The original version of this post incorrectly stated that University Link would not be open for the March 19th home game against Vancouver.

7 Replies to “Take Transit to Sounders FC Matches This Season”