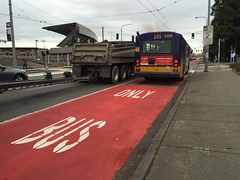 Last month’s ST3 letters had lots of requests for projects not strictly required to have a functioning rail line serving the stops the corridor concepts enumerate. Cities up and down the corridors have asked for help on station access — parking, feeder bus improvements, bike and pedestrian work and so on. A number of stakeholders came together to ask ST to prioritize affordable housing — even if it means taking less than fair market value for land. Most notably, Seattle asked for “early wins” — including bus rapid transit improvements in corridors for which rail would be a decade and a half away.

All of these projects are laudable. Moreover, attached projects are nothing new in Sound Transit’s history: widespread park-and-rides, totally rebuilt roadways on MLK and Broadway, and legal requirements surrounding TOD have all been done before, some things stretching all the way back to the beginning of Sound Transit.

But these concessions come with a cost. ST Spokesman Geoff Patrick cites a staff rule of thumb that each dollar of spending at the beginning of a package eliminates two constant dollars at the end of a package. A truly huge number of small projects could eliminate a very large one; a smaller number may delay delivery of headline projects. Overall, in a given period of time, buying projects early means we buy half as much overall.

Interestingly, Patrick added that the financial plan assumes no revenue from property sales, so concessions to housing won’t affect the package that goes before voters. However, it’s still real money that will reduce fiscal flexibility.

Depending on the project, a tradeoff like that might be worthwhile. But it’s a tradeoff that the board should make consciously, rather than viewing it as something for nothing.

96 Replies to “Early Wins: Something for Nothing?”