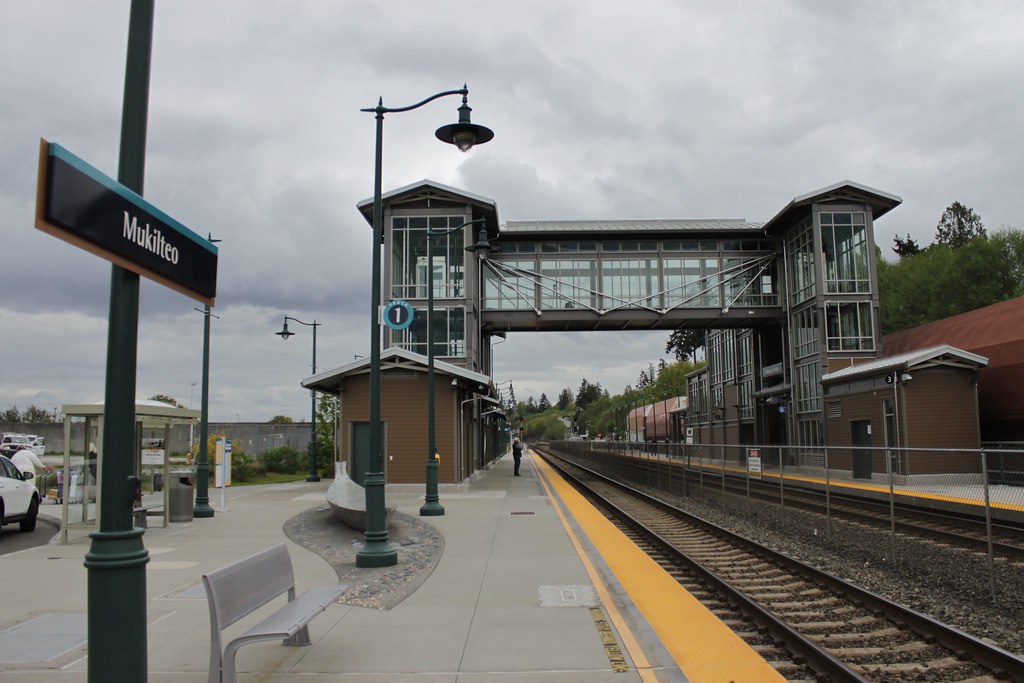 After a delay of over a year, Sound Transit opened the south platform at Mukilteo’s Sounder station on Monday. The platform and accompanying pedestrian bridge wesre opened with a ribbon-cutting that afternoon attended by Mukilteo Mayor Jennifer Gregerson, Sound Transit CEO Peter Rogoff, Everett City Councilmember and Sound Transit Boardmember Paul Roberts, and Snohomish County Executive and Sound Transit Boardmember Dave Somers. The celebration was originally scheduled for Monday, March 28, but was delayed because of a mudslide earlier that day on the tracks between Mukilteo and Everett.

All northbound Sounder trains headed towards Everett now use the new platform, requiring alighting passengers to cross over the tracks on the new pedestrian bridge. The original platform, which will now only serve southbound trains, was opened in 2008 and was intended to be quickly supplemented by a second platform, with only temporary shelters installed. Instead, the project to build the second platform was delayed during negotiations with BNSF Railway over service time needed for construction, which began in the summer of 2014.

The $18.1 million project was originally scheduled to open in early 2015, but the date was pushed back—first to autumn of that year and later into 2016—because of a limited time-frame for construction imposed by BNSF and state inspectors identifying problems with the new elevators on the overpass in late October; it was declared complete in January and is not expected to exceed its budget despite the delay. The station is the last Sounder station to receive a second platform and to use a second track and is one of the last pieces of the 1996 Sound Move measure to be built and opened.

As of 2015, Mukilteo Station has an average of 142 boardings and alightings every weekday. It is located adjacent to the Mukilteo ferry terminal, which is planned to be replaced with a new terminal sited closer to the station by 2019, and is served by three Community Transit routes and two Everett Transit routes.