One of the ironies of land use policy around here is, relative to Seattle, suburban jurisdictions have often been willing to upzone more aggressively in advance of light rail’s arrival. Kent and Des Moines, for instance, jointly up zoned the Midway area for up to 200′, while nothing at Capitol Hill Station will exceed 7 stories and we are having intense policy fights about adding backyard cottages.

Though the City of Bellevue is more properly called a “second city” than a suburb, it remains surprising that much of their light rail station planning has been more aggressively urban than Seattle’s, a fact for which Bellevue deserves praise. Its ongoing Downtown Livability Initiative, slated to be adopted later this year by council, sets aggressive targets for the redevelopment of the East Main Station area, currently occupied by large parcels with 1970s-era low-rise hotels such as the Sheraton and Red Lion. From a city memo:

In the East Main Station Area, the CAC is currently considering 200 to 300-foot tall buildings and up to 4.0-5.0 FAR on the Red Lion site and sites south to SE 6th Street. Current zoning provisions generally limit height and density to 75 feet and 0.5 FAR in this area.

But this planned upzone may not happen at all. In a new development, the upzone is at risk because city employees are seeking to preserve a partially obstructed view of Mt Rainier from a City Hall balcony.

Rather than couching opposition to an upzone in coded language of neighborhood character, the March memo is refreshingly straightforward and transparent:

As the Downtown Livability Initiative and East Main Station Area Planning effort have progressed, an issue has arisen with respect to the impact of taller and more dense buildings being considered through potential upzones on an established view corridor from the public space at City Hall to Mount Rainier. The primary areas in question regarding their potential impact on the view corridor lie generally between 112th Avenue and 114th Avenue/I-405, from NE 4th Street south to approximately SE 4th Street.

The specific viewing location…is from the balcony on the east end of the City Hall concourse near the compass art sculpture. This viewing location provides a partially obstructed view of Mount Rainer.

To protect the view corridor, analysis shows portions of the Downtown OLB District, specifically the Sheraton site, would need to be limited to 91 to 117 feet in height if upzoned. The Downtown Livability CAC recommendation for 5.0 FAR can be accommodated at these lower heights but could result in a fairly large building mass. For the view corridor to be preserved and to allow taller buildings than 90 feet, a building massing study could be used to address view blockage and building massing.

In the East Main Light Rail Station area, the Red Lion property is principally impacted by requiring some portions of the site to be no greater than 123 to 148 feet if upzoned. City analysis has shown that transit oriented development (TOD) densities of 4-5 FAR can be achieved at these heights. To retain the view corridor and also allow taller buildings up to 200 feet would require placement of towers along 112th Avenue NE and away from eastern portions of the site.

In a subsequent presentation, city staff presented downzoning options that would protect the (partial) view corridor. Rather than 200′ heights with a floor-area ratio (FAR) of 5.0, heights would be lowered most severely on the Sheraton site and step up on each adjacent parcel to the south, including the Red Lion, Hilton, and Bellevue Club sites. The Sheraton site could be limited to as little as 91′, the Red Lion site to 123′, the Hilton to 148′, and the Bellevue Club to 174′ (see below).

Staff have also recommended alternative building massings that could retain the FAR of 5 while protecting the view corridor, but the result is the worst sort of boxy, mid-rise development (see middle image below). The developer of the Sheraton site, PMF Investments, who purchased the parcel in the anticipation of upzones, has planned a 5-building development that includes two 200′ towers, both of which would be prohibited if the upzone does not go through.

In a presentation from PMF, the developer claims that the resulting regulations would make the site largely unmarketable:

Neither conceptually designed projects the city used in their presentation to council are developable…extremely large floor plates (117,000 SF) are not marketable due to inefficiencies in design and usability…natural light will not penetrate, buildings cannot be built in phases, no private or public space amenities can be provided onsite, and floor-to-floor heights are not appropriate for Class A office space and a minimum of residential uses. 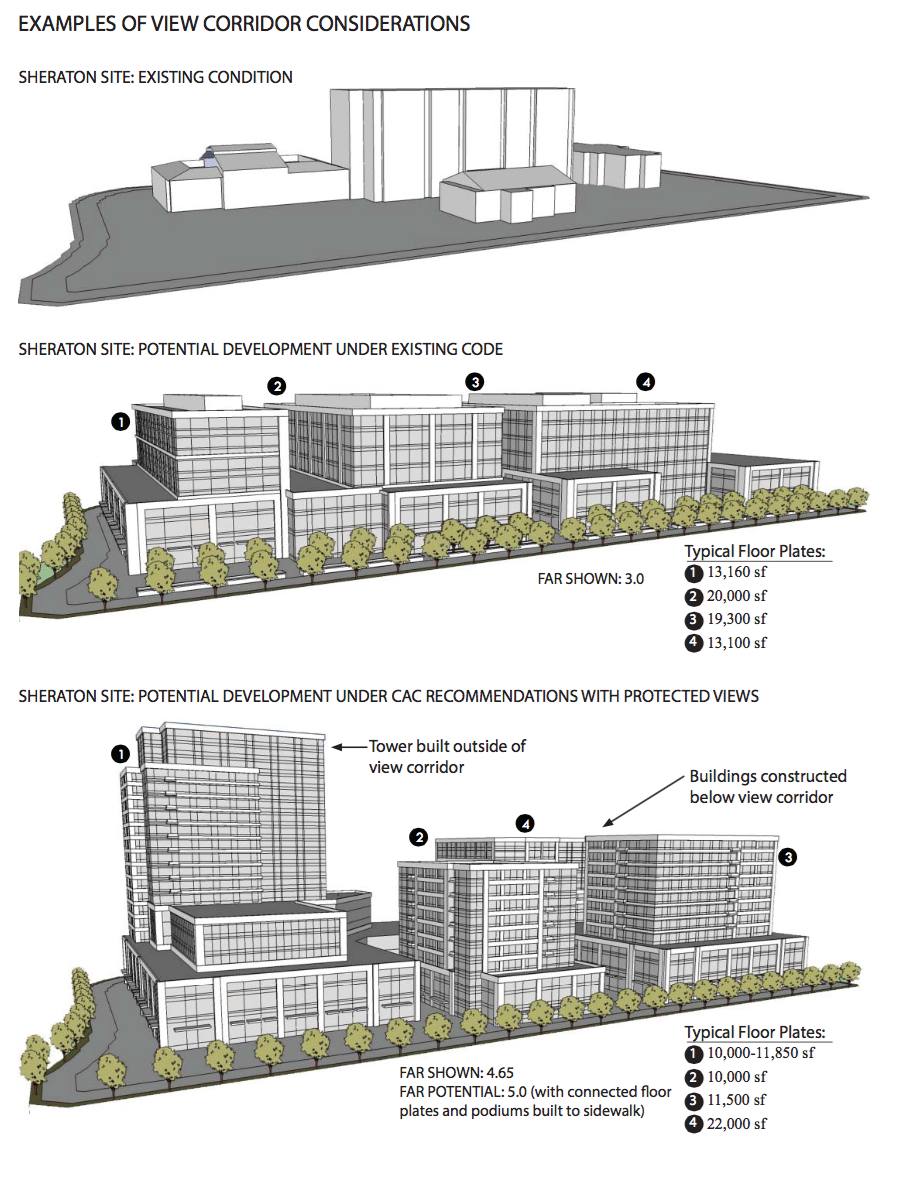 In a statement to STB, PMF struck a cooperative tone:

The City of Bellevue’s Downtown Livability Initiative will create a more vibrant, walkable transit-oriented city – this work is commendable and reflects the type of smart public planning and investments we should be making near transit.

It’s because of the City’s strong leadership on this topic that we are perplexed by their recent efforts to preserve views of Mt. Rainier from a little-used Bellevue City Hall balcony.  We worry it is misguided to prioritize one view versus the City’s best opportunity for transit-oriented redevelopment, which can help achieve our community’s shared goals for jobs, housing and walkability next to the future East Main Station.

Forever cutting TOD potential by 30-50% to protect a partially obstructed view of a mountain that is only visible 80-90 days per year seems misguided at best. Furthermore, such a regulation would selectively restrict development rights because of a property’s proximity to a single public building, providing the sort of regulatory relief that no private developer could ever reasonably expect. Let’s hope that Bellevue carries forward the original recommendation of the Downtown Livability Initiative, and that in 2023 East Link trains serve the density that such robust transit investments deserve.

48 Replies to “Will Bellevue Kneecap Development to Preserve Its Employees’ Views?”