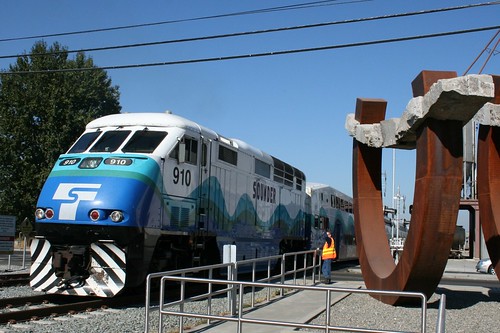 Sound Transit 3 materials have not said a lot about the agency’s successful South Sounder service. Most of the attention in that subregion has gone into extending the light rail “spine” into Tacoma. Sounder will actually have a quicker running time from Tacoma to Seattle, although Link may have its advantages for somewhat spontaneous Tacoma-Seattle trips, those outside commuter rail operating hours, and trips within the South King Link corridor. That said, there is a significant (if vague) commitment to Sounder in the package. And it’s vague for a good reason.

Currently ST runs 8 peak-direction round trips and 2 reverse-peak round trips. 6 of the 8 go to Lakewood. The peaks arrive in Seattle between 5:54 and 9:09am and leave from 3:12-6:20pm. The 2016 Service Implementation Plan says that existing funding will produce an off-peak round trip this September. In September 2017, ST will add a ninth peak round trip and a third reverse-peak round trip. And that’s it for South Sounder without further authorization.
The current ST3 proposal for South Sounder has four components:
But how many trains? Sound Transit can’t say. “We’re purposefully oblique about what it is in the plan,”  ST Executive Ric Ilgenfritz told us, “because we’re in the midst of a negotiation with the railroad.”
BNSF and ST are discussing capital improvements — adding a third track in at least some places is probably the biggest chunk — and assessing the extent to which those improvements allow additional Sounder trips without severely impairing freight operations. The budget available, minimum and maximum achievable service packages, and open time windows for trips are all confidential.
I asked Mr. Ilgenfritz to step back from what the current ST3 constraints are, and describe his ultimate goals for South Sounder. He expressed the hope that it could run hourly all day and into the evening, with even more intensive peak service, and even a few weekend round trips if demand justified it. That vision will almost certainly not occur in ST3, but every part of the day is on the table.
It’s hard to say when the negotiations will conclude. With luck it would finish before late June’s formal approval of the package, but it could easily drag on to the election. But it appears riders in the Sounder corridor have a lot to look forward to.