Imagine an alternate universe for a moment. In 2023 you come to the opening day of 145th Street Station in Jackson Park. You wait 15 minutes for a 2-car, rush-hour train. The train departs along 5th Avenue Northeast, going through 13 at-grade crossings just en route to its first stop at Northgate. 110 minutes, 33 miles, and more than 100 additional at-grade crossings later, you arrive in Federal Way, having traveled on the surface through Roosevelt Way, Eastlake, South Lake Union, Stewart St, 2nd Avenue, 4th Avenue South, East Marginal Way, and SR 99.  That doesn’t sound very appealing? In a nutshell, I’ve just described Portland’s MAX Blue Line. The actual train we’re building will be twice as long, come 5 times as often, and get you to Federal Way a full 50 minutes faster.

We frequently wonder around here why our transit-building schemes are slow and expensive, and I’ve offered my best attempt at the process side of the equation already. But today I want to propose another reason: to put it bluntly, we’re building the good shit and nobody else is.

This is not intended to troll the commenters ready to erupt in apoplexy over legitimate microfights on urban stop spacing or the merits of suburban rail, so let me explain. The Portland example above is intended to show that our peer cities in the U.S. tend to cut corners we aren’t cutting, enabling them to quickly and cheaply build low capacity, infrequent, primarily at-grade systems.  By contrast, only two regions (Seattle and L.A.) are building high-quality, frequent, grade-separated transit in the contemporary United States, and both have the price tags to prove it. ST2 and ST3 are grand experiments to determine if the public has the appetite and the open pocketbook to build yesterday’s quality at today’s prices.

Simply put, no other agency in the country is planning two new 6-minute lines the way we are. Dallas is the worst offender here, with each of its 4 lines running every 20 minutes in order to accommodate 5-minute combined headways on the surface streets of Downtown Dallas. In Denver, heavy reliance on legacy freight corridors has left 5 lines (C/D/E/F/H) running every 15 minutes to share the same double track between I-25/Broadway and Downtown Denver (though their trains are fast and reliable). In Portland, shared use of the Steel Bridge limits 4 lines to 15 minutes each. Minneapolis does better, with 10-minute headways per line sharing a few stations in Downtown Minneapolis, but likely could not expand significantly.

Los Angeles does well, with its main subway running every 10-12 minutes all day, and the Red/Purple lines interlining for 6-minute service east of Vermont Avenue. Its light rail lines escape the other cities’ fate by operating mostly independent of one another.

But Seattle is doing something different. We could probably follow other cities’ path and cut frequency to 15 minutes on our nascent Red and Blue lines, build the Green Line to run every 15 minutes in the current tunnel, and have combined 5-minute service between them. But instead we’re choosing to have our branches be as robust as other cities’ trunks, and we’re not only foregoing surface rail, but we’re proposing to build a second subway instead. 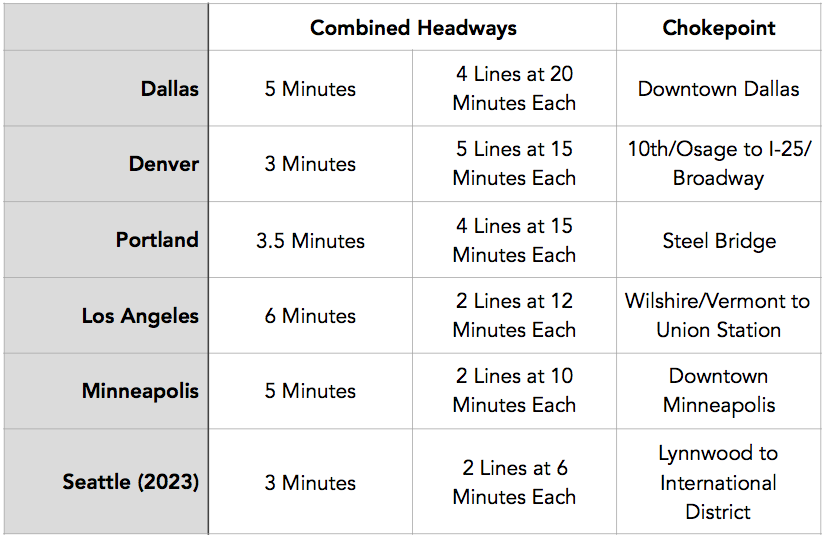 Portland is similarly instructive when it comes to capacity. Its trains will never have more capacity than they day they opened – Portland’s 200′ city blocks and reliance on surface alignments ensure that. Whereas we are building 4-car, 400′ platforms at every station and running each line 2-4x times as often, for 4-8x the capacity. Surface rail is as limited as the shortest block along its alignment that citizens are unwilling to close off. 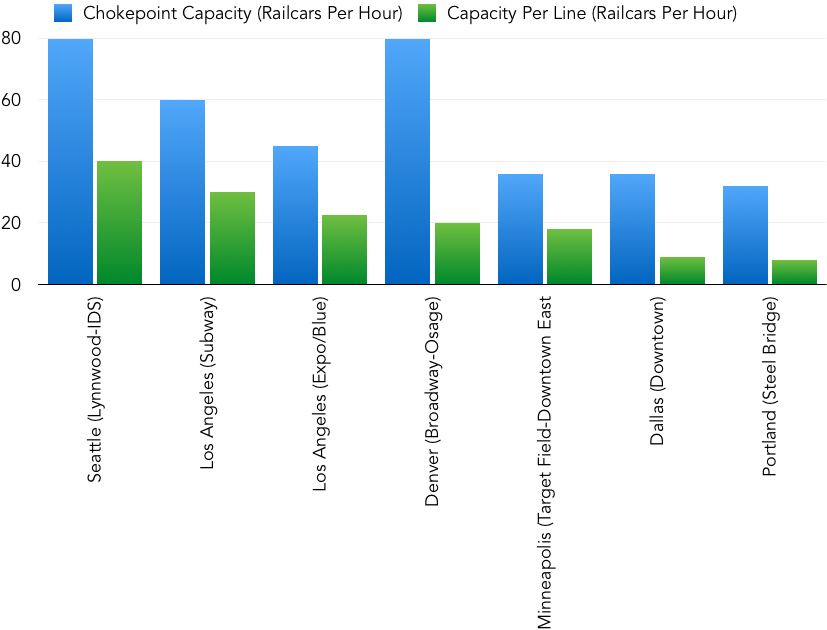 Our topography helps us not cut corners, as our hilly terrain has given us a dearth of legacy freight corridors and also precludes many surface alignments due to grade. But it’s still striking seeing other new light rail systems poke along their Downtown arterials. Again, Seattle and Los Angeles are the only non-legacy systems building substantial new subway and elevated capacity.

To be clear, none of this is saying we’re building in the right places, or that we are self-evidently superior in any way. Those questions are left to the reader. The intent of this piece is to acknowledge that we are choosing to be the tortoise rather than the hare. ST2 and ST3 are an exercise in delayed gratification for a better purported payoff.

We are choosing to do the hardest possible thing, to build new, grade separated, truly high capacity transit. We’re doing so in a wealthy region, through and under valuable land, while appeasing every environmental regulation, mitigating every property owner’s complaint, showering goodies at cities along the way, and securing the majority support of a very engaged citizenry.

The legacy systems of New York and Chicago, etc, built hard things the easy way, with often callous disregard for human life and the environment. Today our peer cities are building easy things the hard way, creating inferior products while encumbered in the same process mess. We are choosing to build hard things the hard way. That is by definition torturous, but it’s also the only way to get real value out of what we’re paying for.

278 Replies to “Seattle is the Tortoise, Portland the Hare”