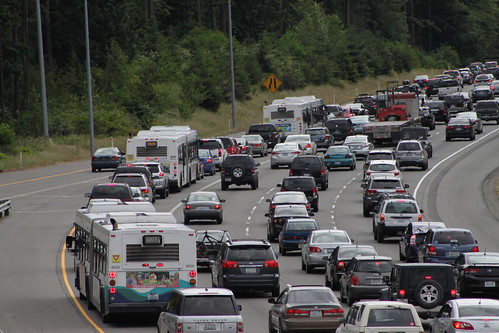 Beginning the weekend of July 8-11th, WSDOT will conduct a major repaving project on I-5 between Tukwila and Federal Way. Southbound I-5 will shrink down to two lanes during this work.

Transit users can expect delays. The work affects the 101, 106, and 150, as well as ST Express Routes. Metro spokesman Jeff Switzer says the agency is considering detours that would still serve all stops, but that in any case travelers will have to allow more time.

There will be no HOV lane in the construction zone even when the existing HOV lane is open.  WSDOT representative Tom Pearce cited the “86,000 cars” that use I-5 on a weekend day:

During these weekend lane reductions, if we were to leave one lane only for HOVs and force all other traffic into one lane, we would cause huge tie-ups on I-5 and other roads that either feed the freeway or that could be used as alternatives. This would have a ripple effect through the entire highway system, causing service disruptions on local bus routes as well as those that rely on I-5.

When we reduce southbound I-5 to two lanes, we need to allow all vehicles to use both of those lanes. With just two lanes where we normally have five, everyone using the road, including transit, will see backups.

This model assumes that very few people will switch to transit given the proper incentives. In my view, a better way to meet the demand for travel in this corridor would be to provide a much faster transit alternative. This would provide at least a hope of matching the normal throughput of people. Unlike WSDOT’s tolling initiatives, the agency is choosing to make everyone sit in a traffic jam rather than giving an alternative to the people that really need it.

Let’s also spare a thought for the Federal Way voter. ST3 opponents are saying that the existing bus system is just as good or better than light rail, but a totally separate right-of-way would be really good about now, and really any time (planned or unplanned) that I-5 melts down.

71 Replies to “I-5 Closures This Summer”