Filling in another 32% of the funding puzzle, the U.S. Department of Transportation (USDOT) announced yesterday that the Lander Street Overpass project has been awarded $45m from the $800m pool of “FASTLANE” grants intended to improve freight mobility, highways, and bridges. Because everything we fund around here is piecemeal, the project has now cobbled together $100m of the $140m it needs to begin construction in 2018, with the feds’ $40m joining $10m from the Move Seattle levy and various contributions from BNSF, the Port, PSRC, etc. Assuming the remaining funding materializes, the overpass would open in 2020. Though the award falls short of the $55m requested, it’s still a huge step forward for the long-delayed Bridging the Gap era project. Just 18 of 300 projects received funding, and our Senate delegation of Cantwell and Murray continued their longstanding success at securing funding for local projects. 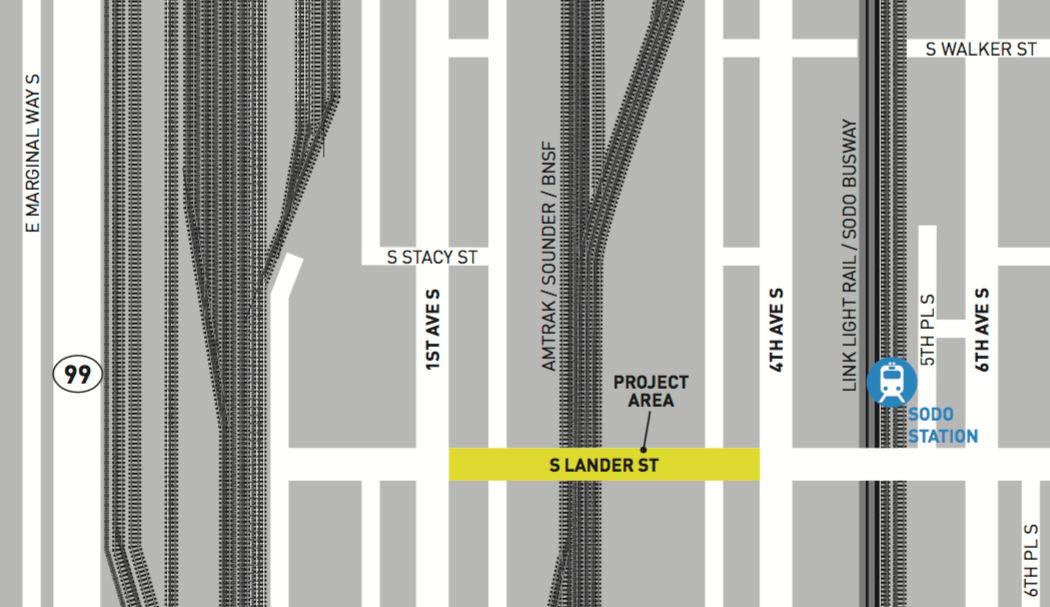 Though the basketball/hockey stadium proposal is on ice and the nearby Holgate crossing is more complicated (7 tracks instead of 4), Lander Street is the still the primary point of enormous conflict between rail, freight, cars, buses, and bikes, with up to 4 hours per day of road closures for trains. Bus routes 21, 37, 50, 116, 118, and 119 are also at the mercy of the crossing, which is often closed more often during peak because of Sounder added on top of normal freight and Amtrak traffic. And if shenanigans around the waterfront transit lanes succeed in cancelling them, we’ve heard that Lander and 4th are a likely backup plan, making it an even more critical corridor for transit going forward.

The overpass would be 2 lanes in each direction, plus a walk/bike lane, spanning from 1st Avenue and 4th Avenue. See SDOT’s page here for more info.