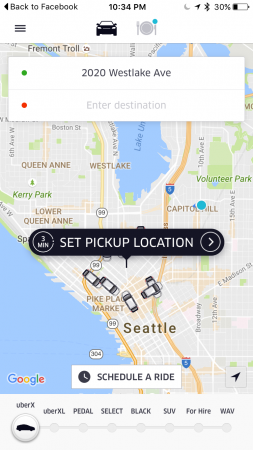 At the end of August, transportation and tech writers seized on the news that not only is Uber losing money, it’s hemorrhaging cash faster than any startup in history. In the first half of this year, Uber’s losses totaled $1.27B, and subsidies for Uber ‘driver-partners’ accounted for a majority of the losses.

Though purposefully losing money is customary to gain market share, and though some of Uber’s losses are attributable to competitive pressure, a majority of the red ink is coming from driver subsidies.

Think about this for a moment. Uber loses money hand over fist because it can’t charge prices high enough to retain both drivers and customers. Just like transit, its farebox recovery is less than 100%. Raising prices will drive off customers, while lowering them will cause driver losses.

These losses are occurring despite remarkable competitive advantage: Uber has few fixed assets beyond human and intellectual capital, it places all capital risk and depreciation on each individual contractor, it avoids nearly all employer taxes, and it is able to soak customers during periods of high demand (via surge pricing) and soak its drivers in periods of heavy traffic (by lacking a minimum wage guarantee). But it’s still losing tons of money, with venture capital playing the role of the subsidizing taxpayer and taking up the slack.

Many tech-minded transportation folks see Uber as the inevitable triumph of private-sector innovation over government ineptitude, and an eventual replacement for transit. But while many have shown that geometric facts ensure that this will never be the case in medium or high density cities, it’s also becoming clear that pesky arithmetic is tagging along.

As fast as the technology will allow, Uber and others are racing to eliminate human operators with the (plausible) expectation that massive profits will come when Uber owns assets that don’t demand wages rather than functionally leasing assets from contractors who do. If driverless technology stalls in its maturation and/or cannot function at scale, Uber and its competitors may be in for a rough ride. Well-financed startups can fund growth from revenue, debt, or venture capital, taking a decade or more to turn real profits (e.g. Amazon). But if the success of Uber and its peers depends on the rapid removal of humans from the equation, even the best-financed startup in history might eventually be on shaky ground.

None of this is to denigrate these (truly revolutionary) services. Rather, I think it’s important to set appropriate expectations for the role they can play in our lives. They will add value, not supplant it.

At the very least, we should see that not only is the current financial model unsustainable, but that even in a fully realized driverless era, urban geometry will set a hard cap on Uber’s potential economies of scale. In any real city, traditional public transit isn’t going anywhere. If anyone tells you otherwise, duck lest you be hit by all the handwaving.

53 Replies to “Uber Discovers the Necessity of Subsidies”