When commuters get frustrated with transit in greater Seattle – be it cars hogging bus lanes with impunity, lack of transit priority altogether, or bafflement at specific planning decisions – a common refrain is “None of this would happen if only our agencies rode their own services!” Our politicians and executives like to tout their transit-riding cred, like Joe McDermott or Dow on the C-Line, or Sound Transit CEO Peter Rogoff apologizing for being late to a recent interview on account of his bus being late. But there remains a perception that elites plan our systems for the rest of us, while driving to work themselves. How true is this perception in the Seattle area?

To find out, I made a public records request for Commute Trip Reduction (CTR) data for the last 5 years for all Seattle worksites for King County (including Metro), Sound Transit, WSDOT, the City of Seattle, Seattle Police Department, Seattle Fire Department, and the EPA Region X offices. Our unique state Commute Trip Reduction law requires any employer with 100 or more full time, benefits-eligible employees who begin work between 6-9am to implement a demand management program with progressive annual goals for reducing their Drive-Alone Rate (DAR). It also makes such data a matter of public record.

So what did I find? With few exceptions, agencies walk the walk, with very low drive-alone rates for their urban worksites. Only 11% of employees at Metro’s King Street Center headquarters drive to work, and only 14% at the County’s Chinook Building. Sound Transit’s drive-alone rate has held steady between 14-17% for the past 5 years, while city employees who work Downtown have held steady between 15-20% driving alone. WSDOT’s Pioneer Square offices perform well at around 15% driving alone, though the data is incomplete for the last two survey cycles, while ferry workers at Colman Dock or Fauntleroy drive alone nearly 40% of the time.

Outside the central city where transit services are more sparse and transfers more frequent, drive-alone rates rise rapidly. At WSDOT’s Northwest Region offices in Shoreline – where snarky tweets and traffic-related memes are generated by the fistful – the drive-alone rate is 74%. Same goes for Seattle worksites outside the central city, such as Haller Lake or Charles Street, where nearly 75% drive alone.

The highest drive-alone rates of all? Metro’s Seattle bus bases (Atlantic/Center and Ryerson), where between 70-80% drive alone.  Though we must admit that these are a special case, with many workers driving to work before the transit they themselves drive is available, there does seem to be a strong drive-alone culture among transit operators. And indeed, though owning a car isn’t an explicit requirement for driving for Metro, current and former drivers have told STB that it is very difficult to be hired without one. New drivers are all part-time, and most work during peak only, which requires getting to places like South or North base where transit is mostly nonexistent. But if the central base operators are still driving most of the time, it’s a cultural thing too.

And what of Seattle Police or Fire? As corroborated by a recent exchange between Lorena Gonzalez, Mike O’Brien, and Police Chief Kathleen O’Toole when discussing the controversial North Precinct rebuild, both agencies are exempt from Commute Trip Reduction. Though there is no statutory exemption, SPD and SFD are exempt because the CTR law treats individual worksites separately, and because no precincts or fire stations meet the requirements of >100 or more employees with predictable shift start times between 6-9am. Asked to comment, SDOT’s Cristina VanValkenburgh and Eric Mamroth said:

SFD and SPD won’t show up because none of their sites are CTR-affected.  SPD precincts outside of center city are also not CTR affected, and most officers wherever they report are subject to 3-month shift changes…It is the usual and customary CTR law language (as stated in your original query) regarding site count and shift times that dictate who, and which sites are included in the statewide survey.

So there you have it, a rather predictable result really. Agency employees are much like the rest of us. They take transit where it is plentiful, and drive where it isn’t. Though politicians and executive-level staff may drive more often, the rank-and-file walk the walk.

Charts below the jump. 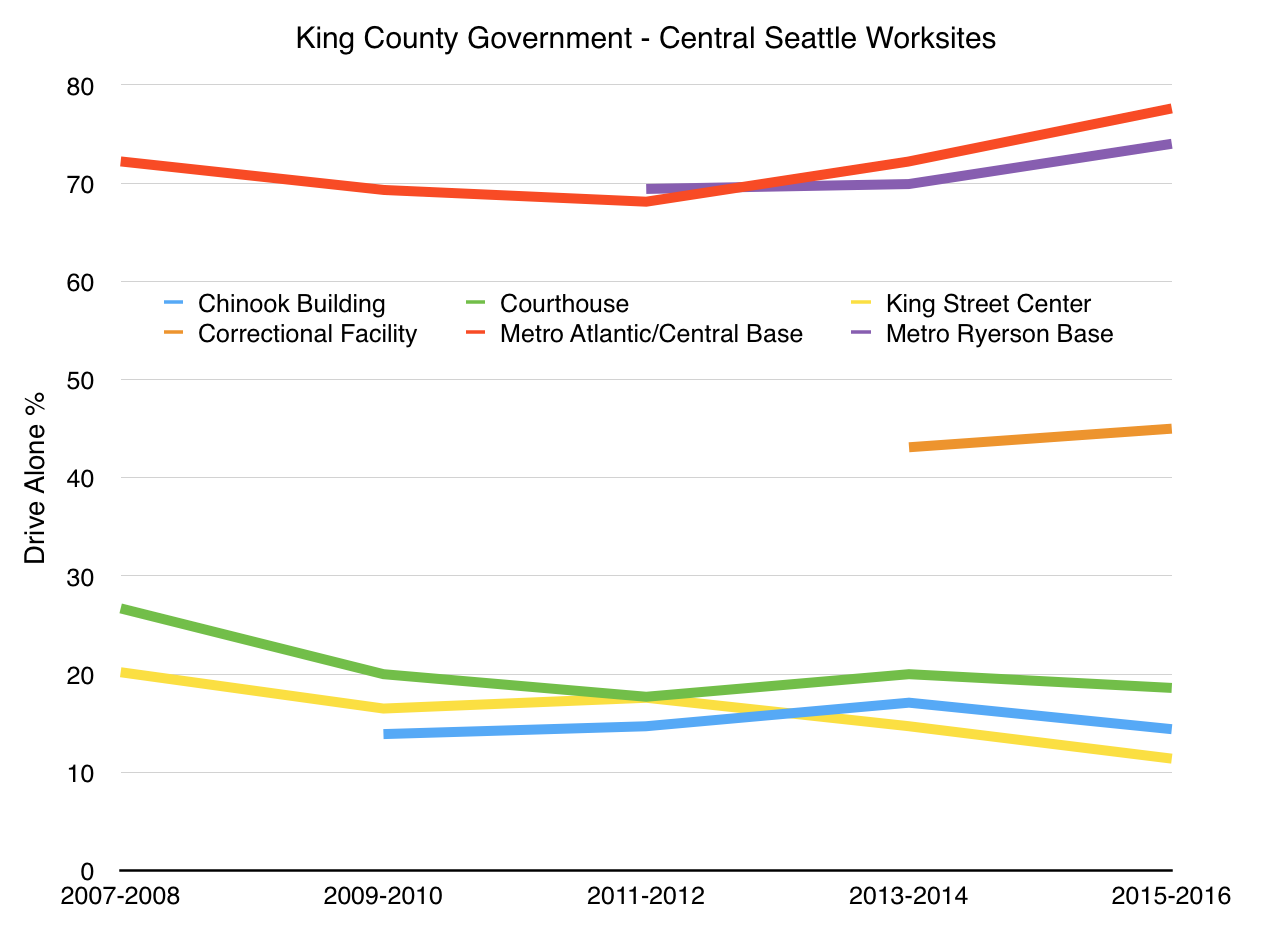 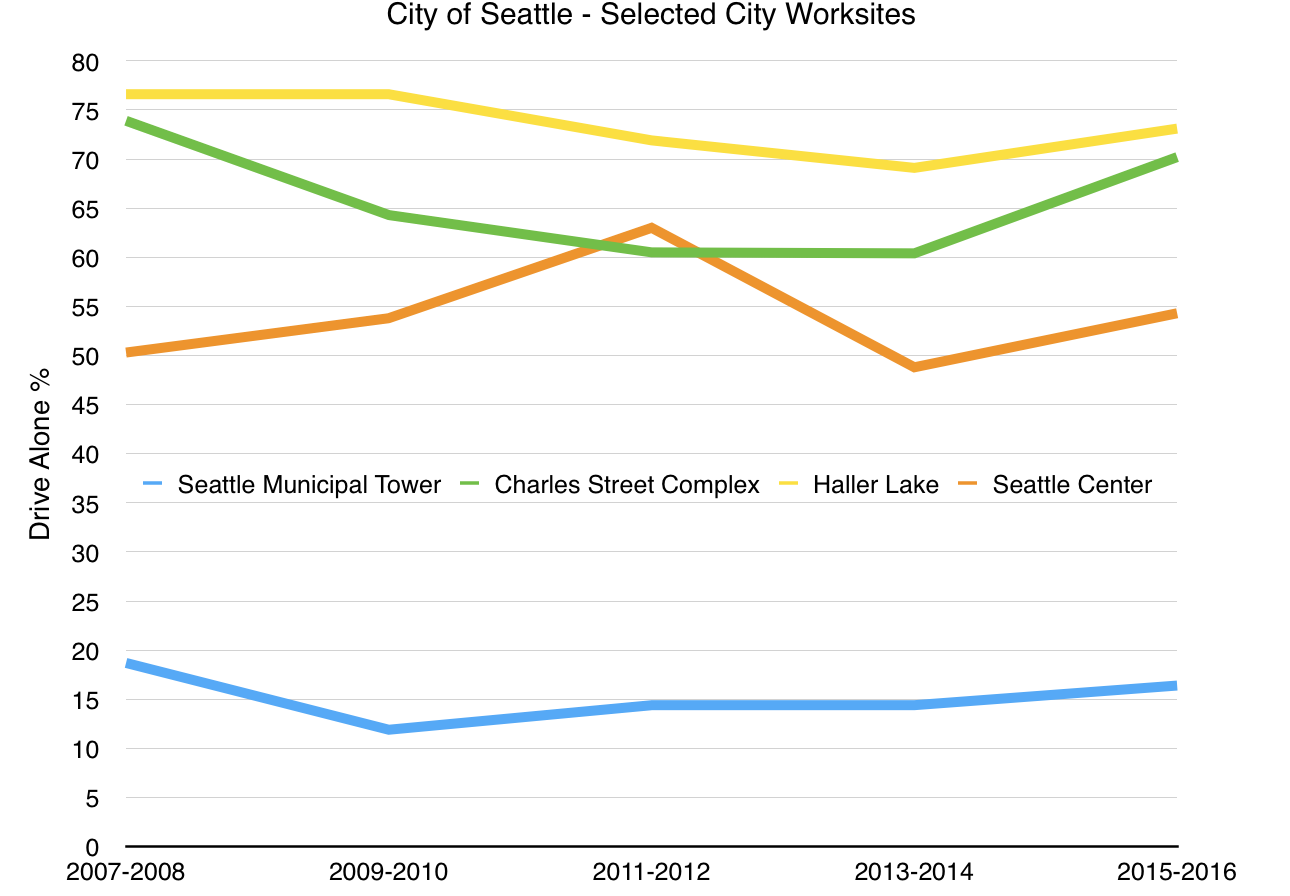 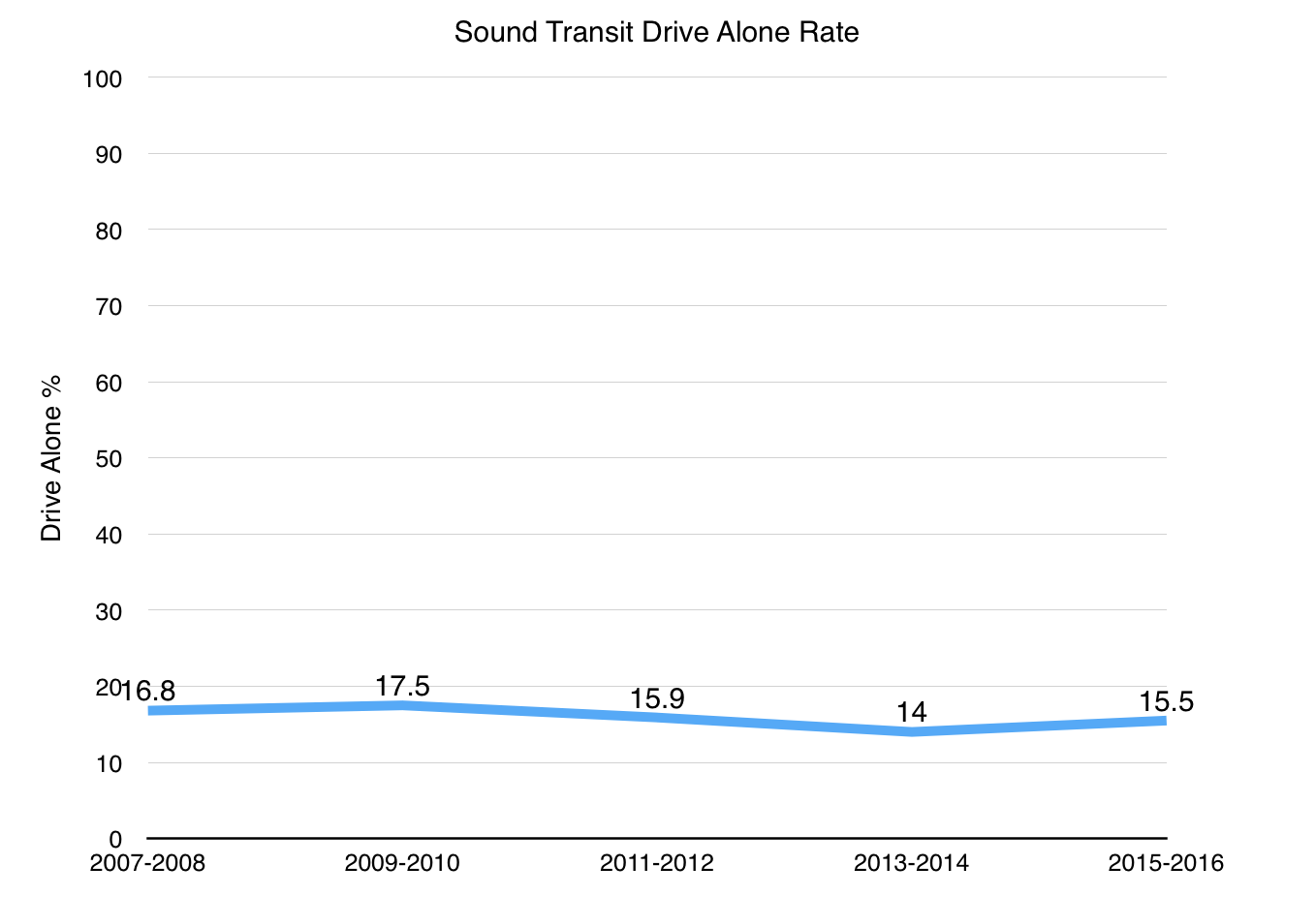 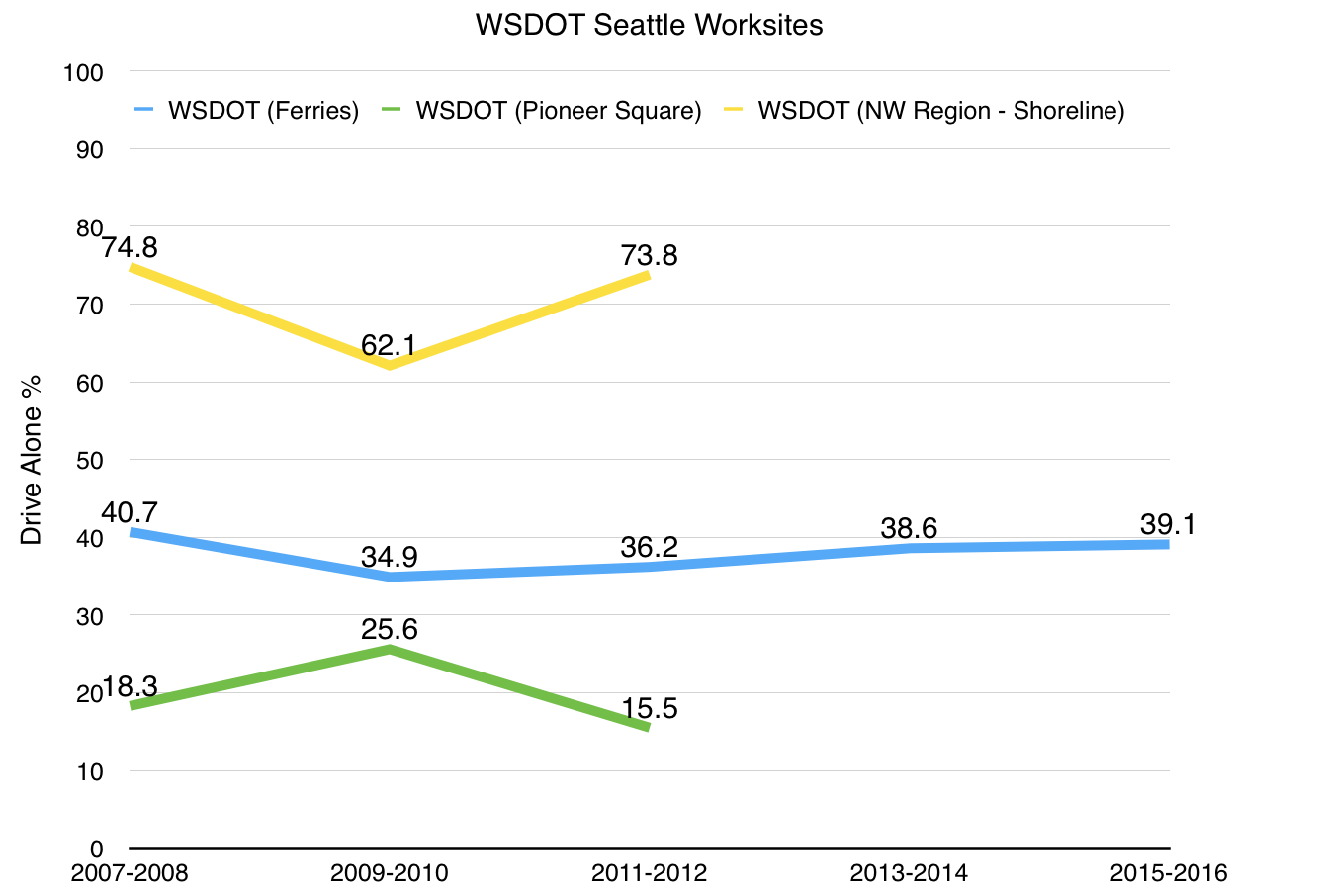 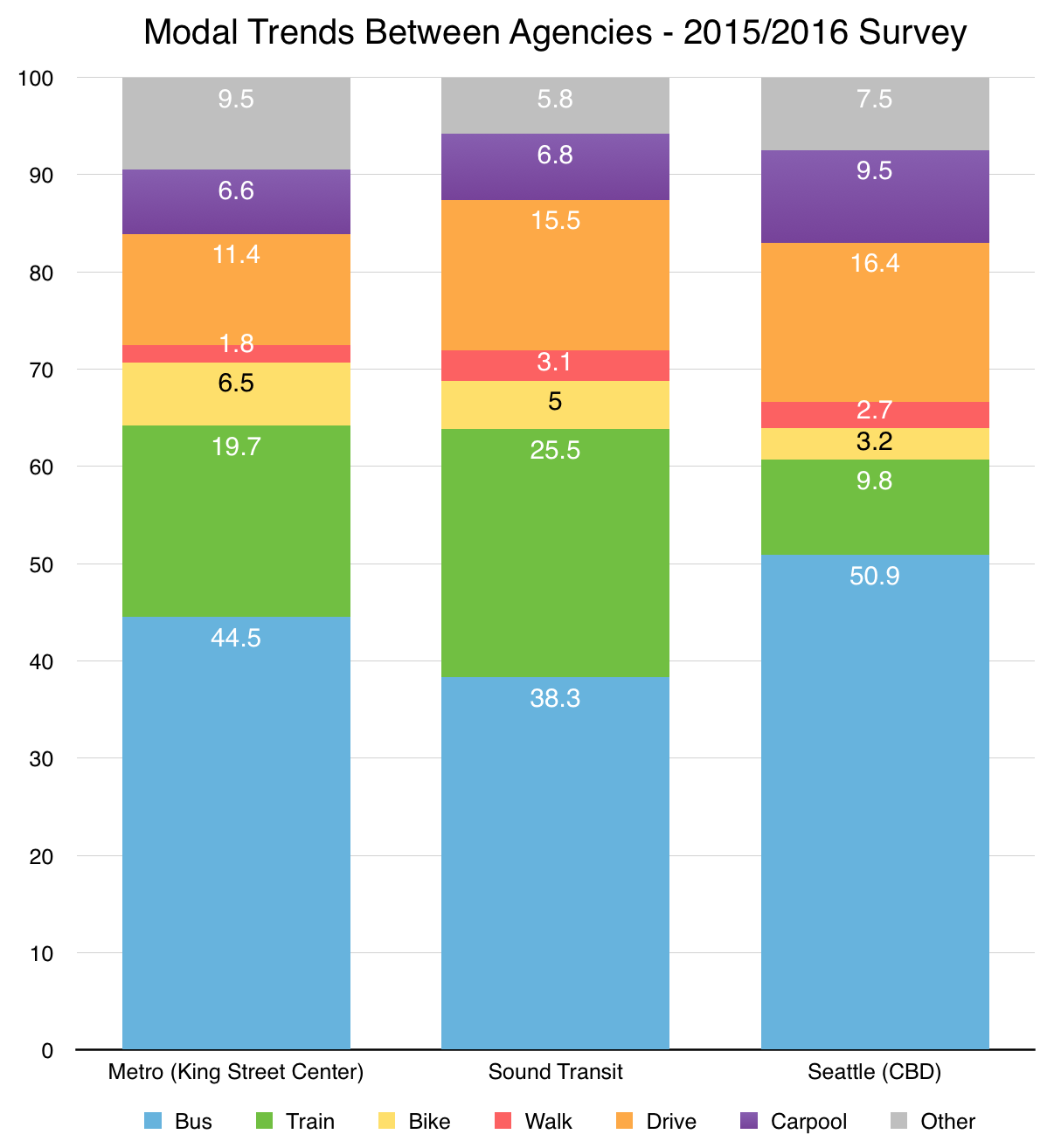 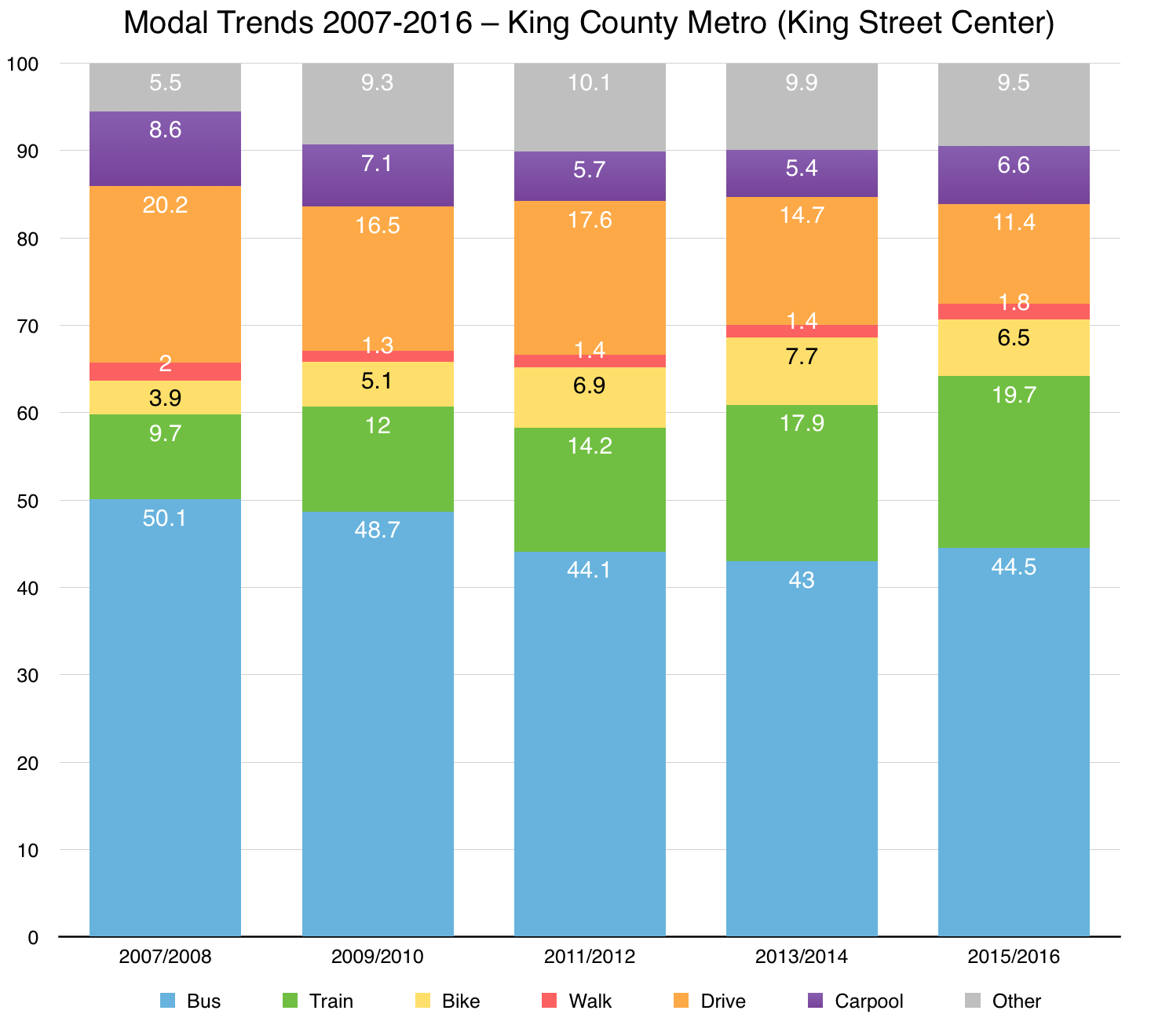 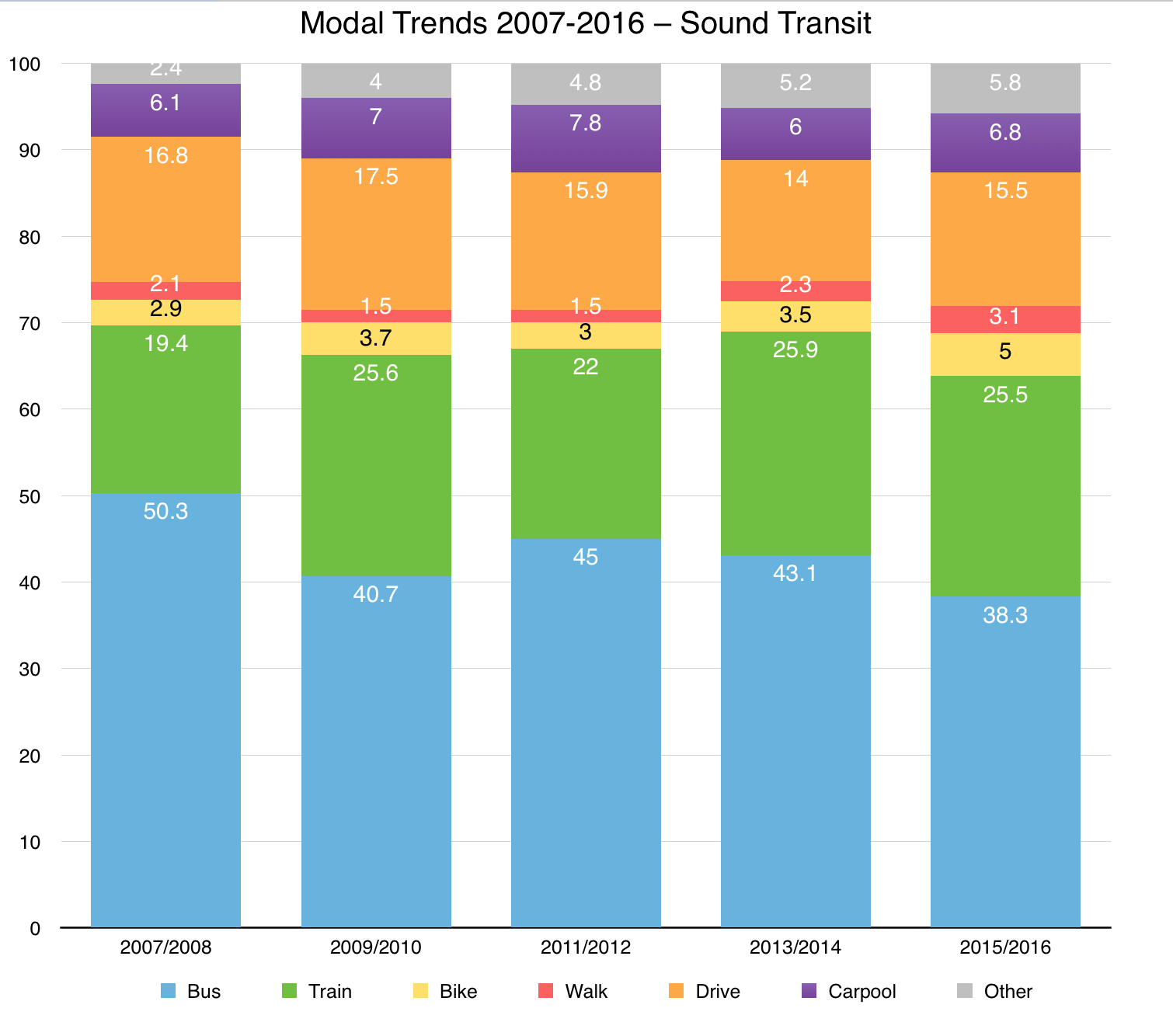 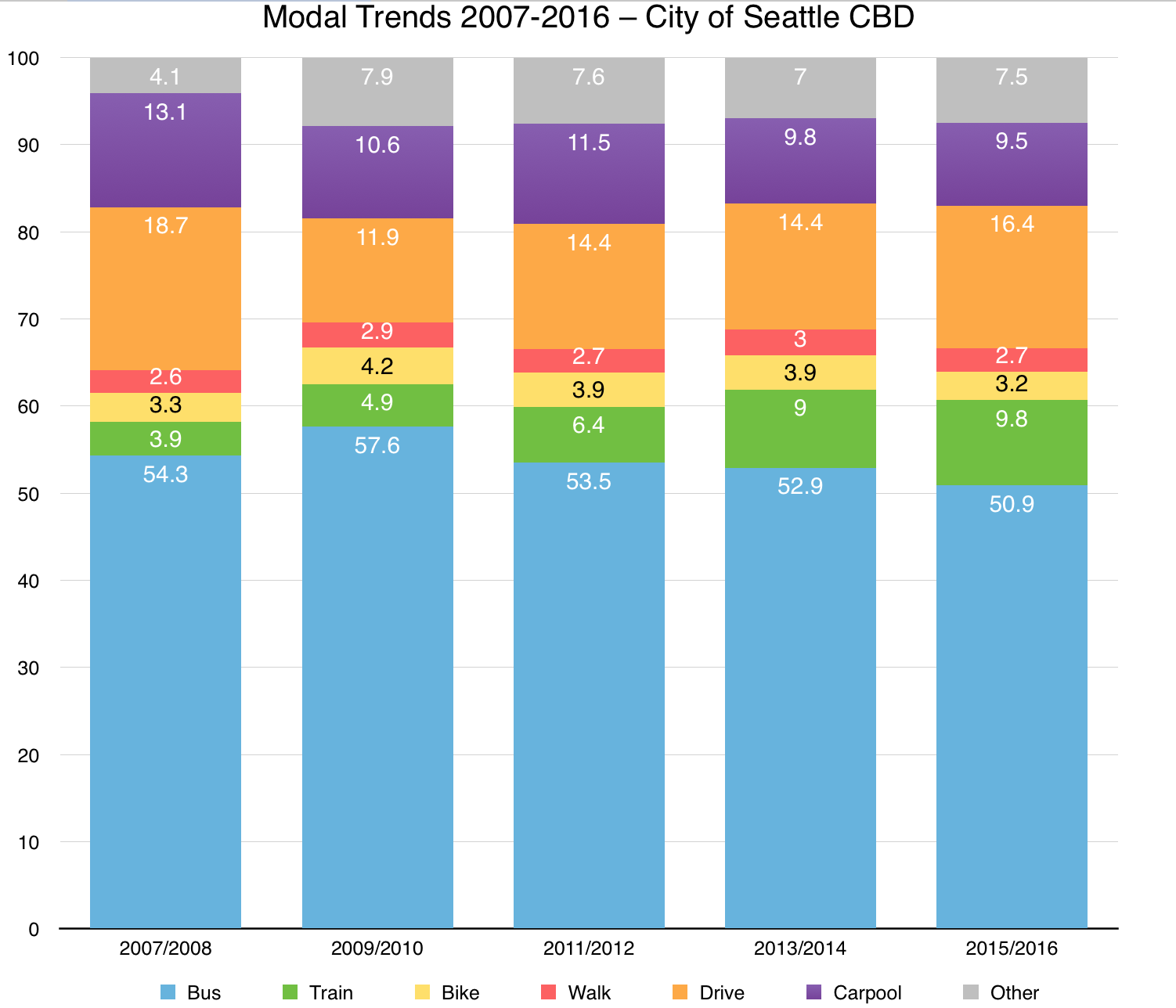 74 Replies to “How Do Public Agency Employees Commute?”