The I-5 express lanes are an underutilized asset. A relic of the days when peak flow into Downtown by car was the primary engineering concern, the express lanes generally flow freely with the exception of single-occupancy vehicles clogging the ramps at Mercer and Stewart. Meanwhile, reverse-peak freeway transit is probably one of the most miserable experiences in the region, as anyone caught on an southbound afternoon Route 41 or 512 can attest. The marginal benefit of ST2 is perhaps greatest for those riders caught outside the traditional commute. Last year, Community Transit used “the last $2m we could find” not for any added service, but just for I-5 congestion padding in their schedules.

It’s remarkable how I-5 is generally ignored in regional planning discussions. It was omitted from the massive transportation package passed last year in favor of new lanes elsewhere. While SR 520 gets HOV3 and I-405 gets dynamic tolling, there has never been any momentum for any type of HOV or transit priority from Northgate to Downtown other than the express lanes. I-5’s needed redecking and seismic rebuild loom silently as the state’s largest unfunded liability. Former WSDOT head Doug MacDonald may be curmudgeonly about light rail or Amtrak Cascades, but he’s absolutely right that I-5 is “a planning orphan.”

Though most (if not all) peak buses are set to be truncated with the completion of ST2 in 2023, that’s still 7 more years of people’s lives to plan for and accommodate.  And of course the physical asset will remain indefinitely. So what should we do with the express lanes?

In the near term, before Lynnwood Link opens, there should be a much greater urgency to think creatively given the historic construction crunch we are facing in 2018-2019, when a torn-up street grid will be asked to shoulder an unprecedented burden of surface transit. The Center City Connector, Madison BRT, 2-way Columbia, Viaduct Demolition, SR 99 tolling diversion, Alaskan Way construction, continuing Denny Substation work, the Center City Bike Network, the probable closure of the Downtown Seattle Transit Tunnel to buses, and the continued boom in private development will all conspire for two or three years of unprecedented pain (as the One Center City effort will attempt to address over the coming year).

One creative option would be to convert the I-5 Express Lanes to two-way operation and take them for transit/HOV3 only. Though various configurations of this idea have occasionally gotten traction over the last couple decades, any efforts have generally fizzled due to a lack of funding and political will. Most ideas have assumed a large capital construction program that would add things like center-access ramps from NE 45th. But if seen as a temporary mitigation measure, is there a low-cost way to make the express lanes bi-directional without pouring any concrete? I think there is.

Imagine a transitway that runs 2-way all day, with the middle lane(s) reversible with a zipper to accommodate extra peak flow. Every ramp to the current express lanes would be ‘unidirectionalized’, operating only in the direction of the outer lane it is nearest. Under such a scenario, all current peak routes that use the express lanes could continue doing so in at least 1 direction, but all routes could make at least partial use of the express lanes around the clock. For example, the inbound 41 would have to access the transitway via Ravenna Boulevard, but would have an unimpeded all-day path outbound from Columbia St to Northgate. And this would be a huge boon to Community Transit and Sound Transit 510/511/512/513, as all Snohomish County routes could use the express lanes in both directions all day.

Here’s a visual I mocked up. Buses could use Mercer, Stewart, or Pike inbound all day, and could use 2nd, 3rd, or 5th (with a new bus lane) to access Columbia Street, which would be transit only and would act as the sole outbound ramp from Downtown. Inbound buses such as the 41 could live-loop through Downtown and head out Columbia, laying over at Northgate. Terminating buses such as the 512 could continue down 5th to Atlantic Base. Peak period trips like the 400s could deadhead to Mercer or Stewart to begin their afternoon, but all routes would run in a counterclockwise service pattern. 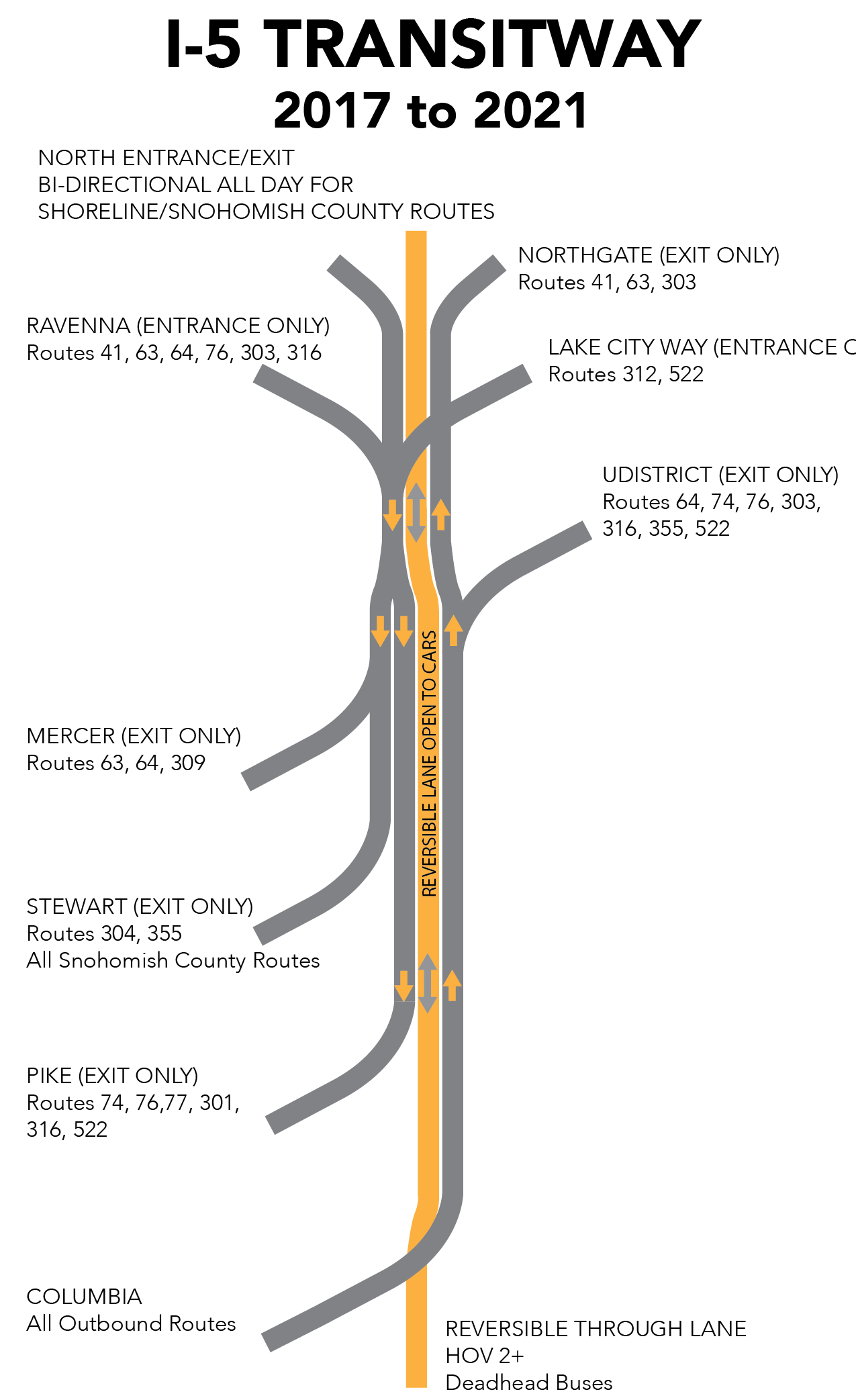 Admittedly radical, but also relatively cheap. If this worked, we would guarantee better speed and reliability for a much broader segment of riders, especially for the reverse peak buses that get totally neglected today. Passengers with traditional commutes would balk at having to exit sooner, of course. But transit would never get caught in I-5’s misery again, at least between Northgate and Downtown. Once Lynnwood Link opens, we could revert the lanes back to HOV or even SOV once the need for most peak buses is obviated. In any case, the express lanes are antiquated and nearing the end of their useful transit life. We should think creatively about the best way to use them.