With the (60′) trolley replacement project now complete, the last of the Breda trolleys will take its final in-service ride tomorrow afternoon with a ceremonial trip from Beacon/Spokane to Atlantic Base.

The lovably awful buses – dubbed ‘Frankenbuses’ by many – have a complicated and storied history in Seattle. Originally a “DuoBus” of electric trolley and diesel power, they began service with the introduction of the Downtown Transit Tunnel in September 1990, running as trolleys underground and where there was wire, and as a standard diesel bus otherwise.

They were difficult or impossible to source parts for, and generally recognized to be a disaster. The imported Italian parts were so scarce and expensive that Metro began hiring sheet metal workers to make replacement doors themselves. In the late 1990s, nearly a third of the fleet needed an engine or transmission rebuild annually.

Metro plodded along through their 12 year service life, eventually replacing them with the sort of diesel hybrids familiar to the tunnel today. Metro repurposed 59 of the 236 coaches as trolleys between 2004-2007, their diesel engines removed and their current collection system overhauled. As a Capitol Hill resident who moved here in 2009, they were all I knew until Link came along, and would be familiar to any recent rider of Routes 7, 36, 43, 44, 49, or 70.

They were notable for their poor ride quality, their pavement-destroying weight (8 tons heavier than a standard bus), their frequency of dropped wire (Bellevue/Pine anyone?), their distinctive musty smell, and their old-timey ‘Stop Requested” bell. But the fact that they lasted 26 years, and the amount of sweat equity put into them, has made many nostalgic about their sendoff.

No matter how much we can justifiably complain about transit policies here and there, we should also recognize genuine progress and bullets we’ve dodged. We could have lost our trolley fleet after a 2009 audit found the aging fleet cost more to service and operate than running diesel hybrids instead. Thankfully Metro persevered and purchased a sleek new generation of trolleys, adding purple to Metro’s color palette and much-needed off wire operation to its bag of tricks. When I stand at Broadway and John today, I have a 2-minute subway and brand-new trolleybuses coming more frequently than ever. Things are getting iteratively better all the time, and it’s time to send the tired ones off.

Metro’s event release after the jump. 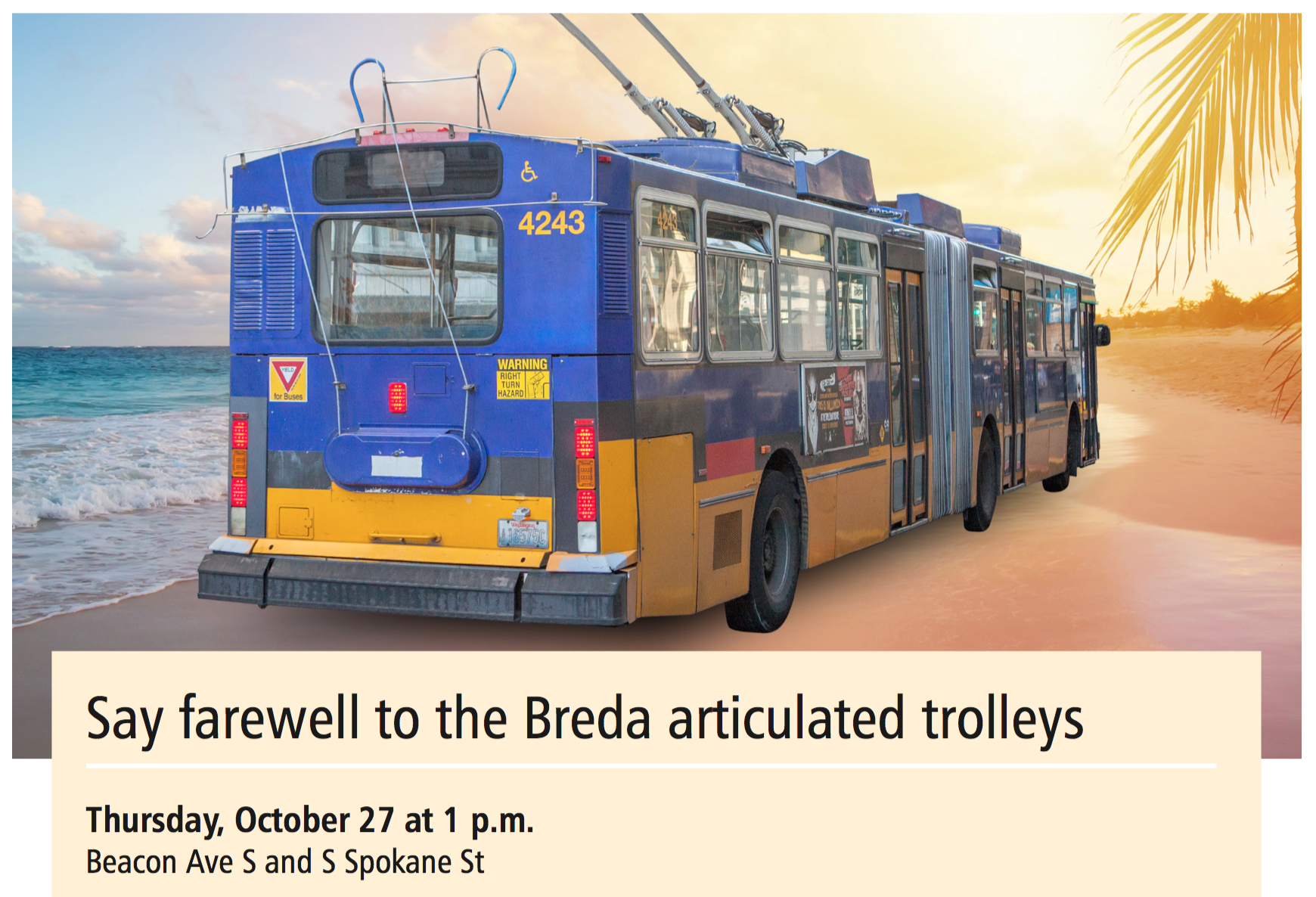 Metro’s last Breda articulated trolley will make its final trip after serving the people of King County for 26 years. Join General Manager Rob Gannon and others to celebrate the history of the Breda fleet during a retirment ceremony at the old Route 3 Jefferson Park terminal (Beacon Ave S and S Spokane St).

After the ceremony, the last in-service Breda trolley, Coach 4243, will make a final trip to downtown Seattle before pulling into Atlantic Base one last time.

Metro put the Bredas into service in 1990 after purchasing 236 buses from Breda Costruzioni Ferroviarie in Pistoia, Italy. These buses were Metro’s specially designed solution for operating buses in the downtown transit tunnel cleanly and quietly. They could operate in diesel mode on surface streets and highways, then
switch to trolley mode—operating on overhead wire—for tunnel operation.

After millions of boardings and miles traveled, we say “arrivederci” to a true workhorse of the Metro fleet. Those who operated or maintained the Bredas, or want to pay their respects, are invited to attend the farewell ceremony.

62 Replies to “Twilight of the Bredas: Last Ride Thursday”