SeaTac Airport was busy Saturday with protest of President Trump’s executive orders restricting travel rights by country of origin. Early in the day dignitaries – including Governor Inslee, Mayor Murray, County Executive Constantine, Rep. Jayapal, and Rep. DelBene – held a joint press conference at SeaTac condemning the orders. As part of a wave of airport protest Saturday night, protesters began gathering at SeaTac in the early evening hours, with over 1,000 protesters inside the terminal at its peak. The protest was peaceful and uneventful until the early morning hours, when there were a few dozen arrests and Port police began using pepper spray. 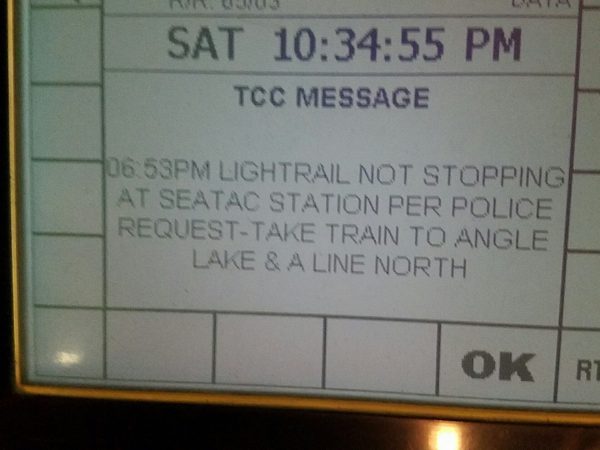 Around 6:30pm, Link light rail operators were asked by the Port of Seattle Police Department to suspend service to SeaTac/Airport Station. Operators complied, and protesters and passengers were forced off at Tukwila Int’l Blvd station and forced either to catch crush loaded A-Line buses or walk the 1.5 miles to the terminal. The station is on Port property, and Port Police asked for the closure in order to buy time to get backup police to the airport, The Stranger reports.  Within minutes, Sound Transit began taking a beating on Twitter, as by all appearances it had been they who ordered the closure. 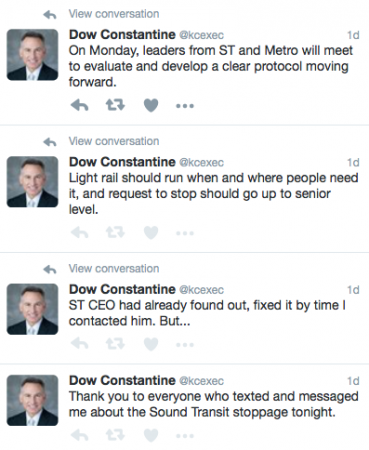 But Sound Transit executives later indicated they were surprised by the closure, as it had already been implemented by lower-level staff. Once CEO Rogoff was made aware of the closure, he immediately worked to get service restored, and trains resumed service to SeaTac shortly after 7:00. Dow published a series of tweets thanking CEO Rogoff for restoring service, while also saying that Metro (who operates Link) and Sound Transit would meet beginning Monday to establish closure procedures that ensure that such an action won’t be taken again without being elevated to senior staff.

So while the closure was unfortunate and obstructed the rights of legal public demonstration, I think it’s appropriate to react gracefully in light of the multi-agency response. Saturday was a rightfully tense day at a multi-jurisdictional facility (CBP, FAA, DHS, Port, ST, KCM) concerning tragic matters of life, death, family, and national identity.  The Port was supportive of the protest cause, and earlier in the day had released a statement condemning the executive orders. Port Commissioner Gregoire also repeatedly voiced support.

In light of the closure, riders deserve an answer to the question, “Who can order closures, and when?” But for its part Saturday, Sound Transit had successfully elevated the issue to the Executive level, taken reparative action, and issued a public statement, within 30 minutes. All things considered, that’s pretty damn good. It’s good to know that our agencies support the rights of protest, and understand the value of transit as a public utility that makes it possible.

44 Replies to “What Happened at SeaTac Saturday Night?”