The seven corridors would come online in quick succession between 2019 and 2024, beginning with Madison BRT (now Rapid Ride G) in 2019 and Delridge (now Rapid Ride H) in 2020. Shortly after the opening of these seven corridors and East Link, SDOT will have met its “10/10” goal of having 72% of Seattle residents within a 10-minute walk of 10-minute or better service. The network effect of Link’s Red and Blue lines with Seattle’s twelve total BRT corridors will be nothing less than transformative. The existing C, D, and E lines will join the seven Move Seattle corridors, a Metro-led Rapid Ride corridor between Bothell-Kenmore-Lake City-UW (Route 372), and Sound Transit’s coming BRT along SR 522 and NE 145th St. 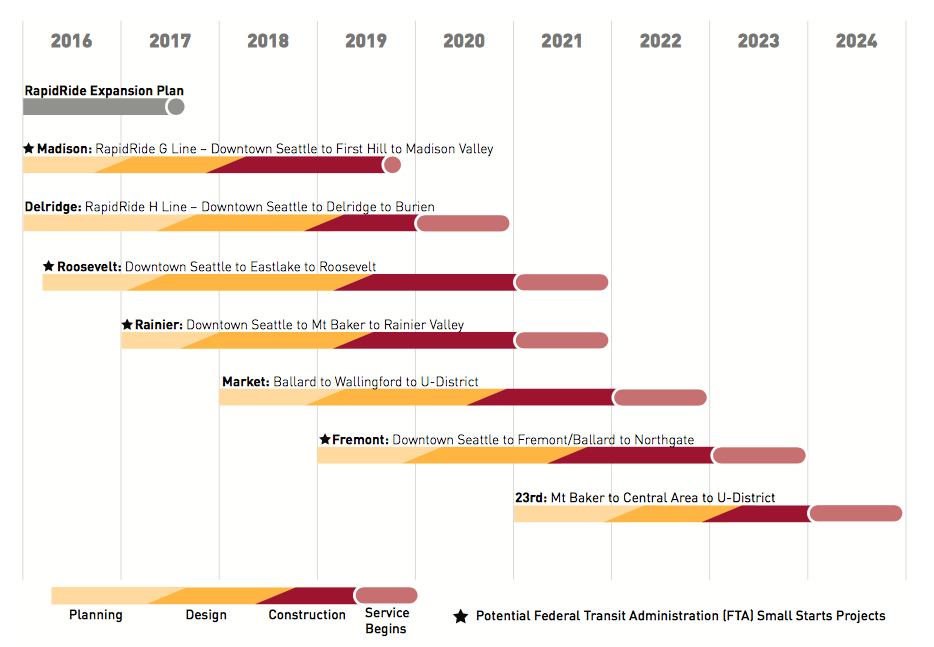 In a presentation before the Seattle Transit Advisory Board (TAB) Wednesday night, SDOT Transit Division Director Andrew Glass-Hastings said that SDOT would seek federal funds for two of the most competitive corridors (Rainier and Fremont/Ballard), while building Delridge, Market/45th, and 23rd with local and state funds. Federal funding is already assumed in the budgets for Madison and Roosevelt. Glass-Hastings said that federal formulas strongly privilege corridors that have both residential and employment density. Though Delridge connects to downtown and Market/45th and 23rd connect to UW, all three corridors have lower residential density and likely would not score as well. “Federalizing” the planning process also comes with significantly more red tape and environmental work, so SDOT only wishes to do so where the marginal return is greatest.

In terms of capital improvements, each project will vary according the the quirks and limitations of each corridor, and each corridor will see difficult multimodal tradeoffs, as has already been seen between bikes and transit in the Roosevelt corridor. Tradeoffs on Market/45th are expected to be especially difficult.

Staff are assuming additional electrification on Madison, 23rd, and possibly between the UDistrict and Northgate along the Roosevelt corridor. The propulsion for the Route 40 and Route 120 corridors will be some combination of diesel and/or battery buses.  All routes will include transit signal priority, off-board payment, real-time arrival information, bus priority lanes where possible, enhanced stop amenities, and a 10-minute frequency guarantee.

Previous restructuring concepts for the Rapid Ride program are not included in this planning process, including combining Routes 7 + 70 and Routes 7 + 48 to form two ultra-frequent corridors in the Rainier Valley. Those routes are in the 2040 vision for Metro service, while this plan aligns with Metro’s 2025 vision.

SDOT said open houses for Madison would begin again soon as the project moves toward final design, as will additional outreach on the Delridge and Roosevelt corridors. Given its extension into White Center, Westwood Village, and Burien, King County and Burien will also be working to ensure that Rapid Ride amenities are provided consistently throughout the entire Delridge corridor.

And of course, these primarily capital improvements are separate from the service restructuring processes that King County would have to undergo, including alignment approval for each corridor from the King County Council, and service change outreach and approval when the lines are nearly ready to open.

Concurrently, Metro will begin planning its 2025 Rapid Ride corridors in suburban King County, with lines including: