On March 5, 1912, some 40,000 Seattleites filed into voting booths across the city to decide whether its future would be directed by a 273-page comprehensive plan designed by civil engineer Virgil G. Bogue, a practitioner of nationwide “City Beautiful” movement.

The plan was bold and ambitious, fitting for a newly-christened city that was in the middle of a massive period of growth following the Great Fire of 1889 and the Alaska-Pacific-Yukon Exhibition of 1909, capitalizing on recent public works projects by city engineer R. H. Thomson (for whom the R. H. Thomson Expressway was to be named). Thomson’s ongoing regrade of Denny Hill would provide 38 acres of flat land for a grand, European-style civic center in modern-day Belltown. The civic center would feature a central train station (replacing the then-new King Street Station) and a city hall designed in the Beaux-Arts architectural style, resembling Paris more than New York (with a strict height limit on buildings, advocated for by Bogue).

Over 60,000 acres of parkland, building upon an earlier plan by the Olmsted Brothers, stretched along tree-lined boulevards in the city and beyond to the Eastside; in his plan, Bogue proposed that the 4,000-acre Mercer Island be acquired for a “people’s playground, worthy of the city of millions which will someday surround Lake Washington”. A network of highways would radiate out from the city, providing wide, free-flowing roads for recreational automobiles that would serve suburban areas outside of the city limits.

By far the most ambitious part of Bogue’s vision was its 90 miles of rail transit, something present in a handful of American cities at a time when streetcars and interurbans ruled city streets. The network spanned from Burien to Lake City and, when overlaid over a modern map of the city, has striking similarities to corridors part of ST3 and visions from modern transit advocates. The downtown spine (Route 1) follows the path of the modern transit tunnel, Route 7 is a variant of the popular Ballard-UW subway, and Route 2 mirrors the Interbay routing of the Ballard-Downtown light rail line approved in ST3. There are, of course, oddities left over from the era, including a looping surface-level line on Queen Anne Hill to serve the city’s elites, re-using the interurban right-of-way to the north and south of the city, and prioritizing service to Fort Lawton in Magnolia, at the time an active military post.

A description of each subway route can be found in the plan’s third appendix, but I’ve summarized them with modern neighborhood and street names:

It’s not hard to imagine how different the Seattle of today would have been, even if it had suffered partial dismantlement during the post-war era like other, older transit systems. The whole system was to be built by 1935 (though, in all likelihood, would have been delayed further or not fully built due to World War I and the Great Depression), with the elevated portions to be converted into subways at a later date. The development of a suburban transit system would have likely come in the late 20th century alongside other cities, but with the benefit of building a complementary system that would solely fit its role for suburban rail, rather than split the difference like Link will.

Bogue’s plan would sadly fail to convince the business establishment of the time, who feared that their downtown holdings (in modern-day Pioneer Square) would be left behind as the center of commerce shifted north to the new city center. All three of Seattle’s daily newspapers, the Daily Times, Star, and Post-Intelligencer, ran editorials against the plan, with the former warning adoption of the plan would result in a “lamentable spectacle” of taxpayer waste. The public were also unconvinced of the plan’s financing, with confusion over how such ambitious efforts would be funded.

A 10,000-vote margin may have rejected Bogue’s grand plans for Seattle, but its legacy lived on. The center of commerce would eventually move further and further north from Pioneer Square in the 1910s and 1920s, culminating in our modern-day boom in Denny Triangle and South Lake Union. The civic center was partially realized in the Seattle Center built for the World’s Fair, though without some of the civic buildings in the plan. And our modern light rail system will follow the same corridors plotted by Bogue a century ago, and other in the time since then, finally fulfilling the dream of an urban subway in Seattle.

I leave you with this poem composed by a self-described taxpayer in a letter to The Times on February 4, 1912: 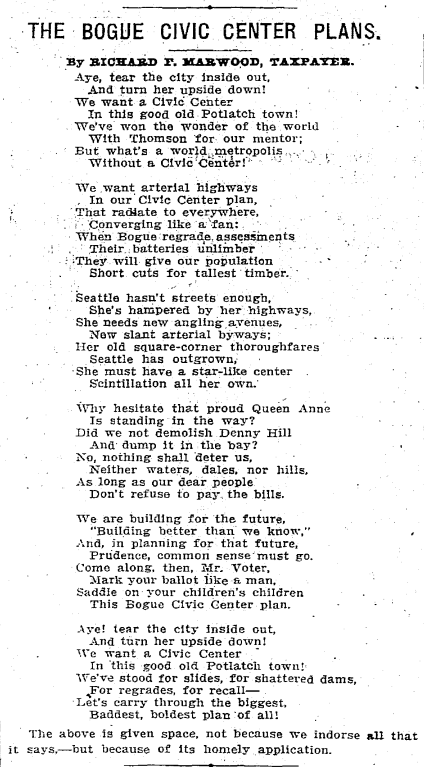 The Seattle Times has run several great articles on the Bogue plan in retrospect, including this 1991 piece by editor Ross Anderson and this 1972 piece by historian Walt Crowley. I would highly recommend reading both, although the latter requires a Seattle Public Library card (which grants access to a vast archive of Times articles from 1895 onwards). Surely, by now, the paper has regretted its opposition to a forward-thinking transit plan, but only time will tell.

Below, I’ve embedded the full plan (courtesy of Archive.org; an alternate version can be found on Google Books), as well as my map of the rapid transit system overlaid onto Google Maps. The four original maps from the plan are also available on Wikimedia Commons, courtesy of the Seattle Public Library.