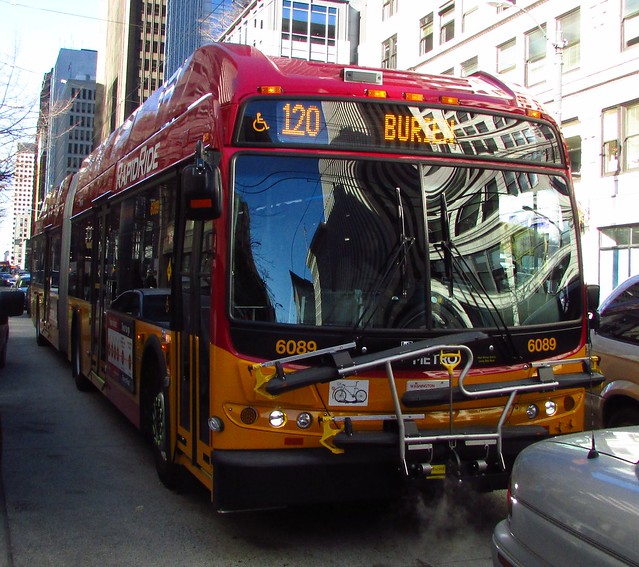 SDOT has kicked off design for Rapid Ride H, the planned upgrade of the Route 120-Delridge corridor. The work area stretches 4 miles from the West Seattle Bridge to the southern city limits at Roxbury Street. Route 120 is one of the top-performing routes in Metro’s network, with 6,300 boardings per day. Comments on early concept designs are due by March 31, and you can view the proposals here.

There are a few unique things about this corridor relative to other Rapid Ride corridors. First, it will be the first route improved with SDOT funds that also extends past Seattle – into White Center and Burien – meaning that improvements south of Roxbury will have a separate (and not necessarily simultaneous) Metro-run process. If White Center annexes into the city during the project timeframe, it is unclear whether this will increase SDOT’s scope of work or not. 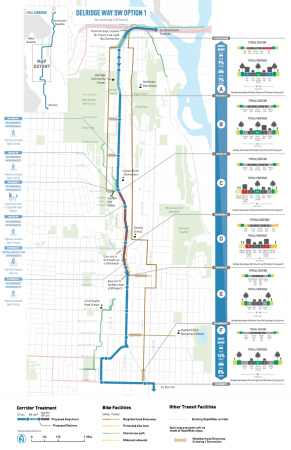 Topography and development patterns have meant that Route 120 is already relatively fast, averaging 15mph between Roxbury and the West Seattle Bridge. There is little transfer activity along the line due to a broken grid and steep hillsides, and the corridor is primarily residential or small-scale commercial development. This means there is little to get in the way of the bus.

But aside from a short Business Access and Transit (BAT) lane approaching the bridge, there is no transit priority on the corridor today, and bike facilities are limited to two disconnected (but generally high quality) greenways flanking Delridge on both sides.

SDOT is proposing two broad concepts for the corridor. Option 1 is the more aggressive for transit priority, with BAT lanes from Andover to Alaska and from Graham to Holden Street. Parking would be removed to make way for these BAT lanes, but between Alaska and Graham Street parking would be retained and buses would run in general traffic. Throughout Option 1, the center turn lane would be replaced with a landscaped median wherever roadway width permits. 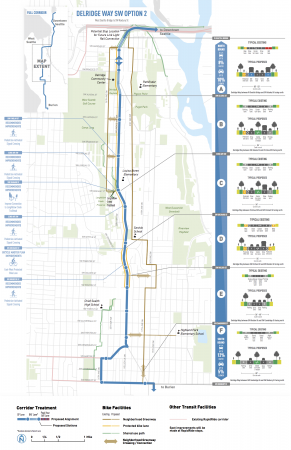 Option 2 would only provide BAT lanes between the West Seattle Bridge and Alaska St. More parking would be retained, and a continuous southbound Protected Bike Lane (PBL) would be built from the uphill stretch from Andover to Holden. A northbound PBL would be built for a short 3-block stretch between Webster and Orchard. Where the corridor narrows south of Holden Street, both options would retain the current look of street parking and general purpose traffic, but with center turn lane/median improvements.

Beyond the channelizations, both options would invest heavily in resurfacing the street, removing a handful of stops to bring the stop spacing up from 1/4 to 1/3 of a mile, adding shelters and off-board payment, and improving east-west connections from Delridge to the adjacent neighborhood greenways. The primary tradeoffs, once again, seem to be between bicycle and transit facilities, but these improvements would enable a big boost to frequency and reliability, and an 8-12% improvement in speed.