My purpose here is to put a few ideas in front of Seattleites that I think might be useful in the debate about transit expansion. Obviously I live in Vancouver, but, as folks here have noted, Vancouver does have useful transit lessons to other cities in the region.

The current plan is Option 1: 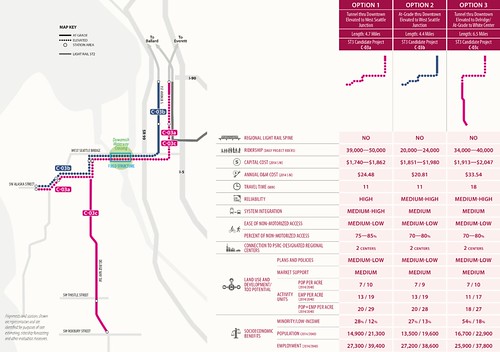 Instead of running parallel to the current Link line, my proposal is for a line that crosses the current line and continues into the central district: 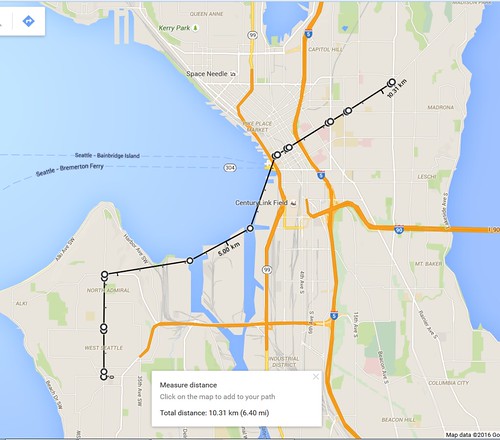 Double dots indicate stations and single dots are just to show the route. The line needs to curve against the harbour headland to stay within shallow water. The stations would probably need to be deep, so it would go under the existing Link line and the existing train line. Because the station under Broadway would be the deepest, there would be a possibility of a level entrance at Boren that would access the platform more or less horizontally with a moving walkway. Expensive, yes, but far cheaper than a whole separate Boren station. 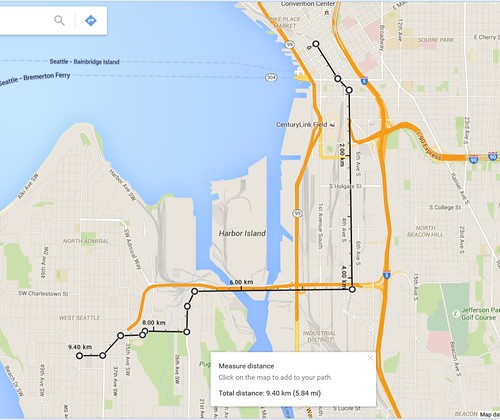 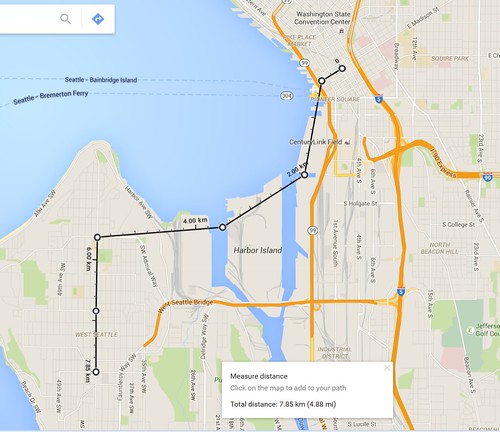 Obviously the actual station locations could be adjusted to meet the connection requirements to the current Link line:

I’m also not sure whether continuing the line down Madison is the right thing to do or rather have it continue due east on Union might make better sense for bus connections.

The stations south of Admiral could be built later, but in any case, a BRT or BRT lite system would have to be implemented on California to get the maximum benefit of such a line.

The line could also be extended further south to serve more areas and improve bus connections. This diagram is penciled out to White Center, but Burien might also be a logical termination point: 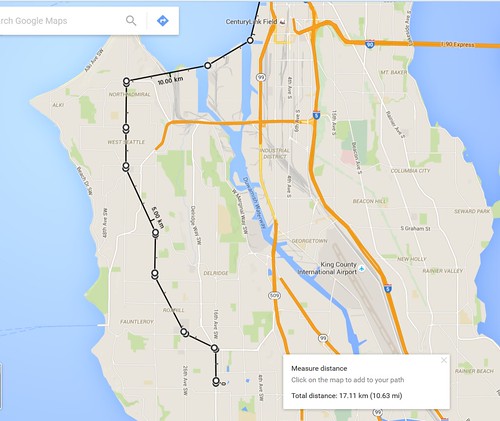 The principal improvements over the current proposal are:

A possible extension, but very fanciful at this point, would be to extend such a line to Bellevue with a tunnel under Lake Washington or a new floating bridge for trains and bikes:

Built as a buried fully grade-separated metro, such a line would offer very fast service between Bellevue and Seattle downtowns which would be as transformative as the UW Capitol Hill Link extension. And a frequent automatic line would enhance the operation of bus transfers off Bellevue Way and I-405. An absolutely vast improvement over the current East Link plan.

To serve the central district Seattle Subway and commenters on this blog have pushed for a metro 8 subway as in yellow below: 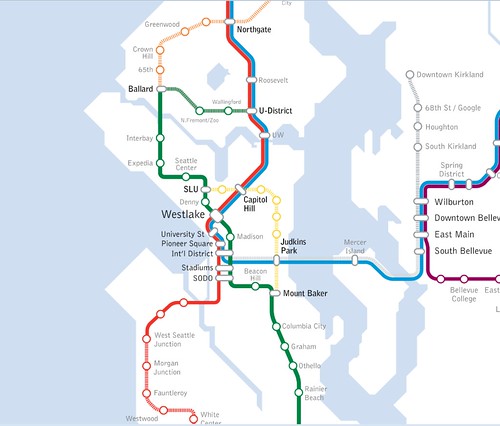 I am skeptical about this line. Such a line would be perfectly useful, but it also would be basically the same distance as my Junction to Madison line and thus the same cost. And while serving SLU is laudable, there is still more employment in the traditional downtown and thus more demand there than to SLU.

There are also other solutions to ease connections to SLU. I think that a bike and moving walkway tunnel from Capitol Hill to SLU might be just the ticket. The tunnel would have a level entrance down the hill and elevator access up the hill:

Other commenters on this blog have pushed for another DSTT to serve a network of West Seattle buses to avoid transfers and to better serve the more diffuse population in West Seattle. 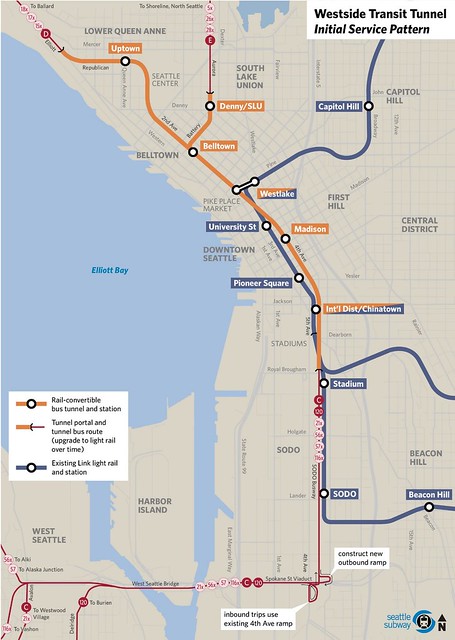 Or, more efficiently, a new DSTT and turn current DSTT into a bus tunnel again: 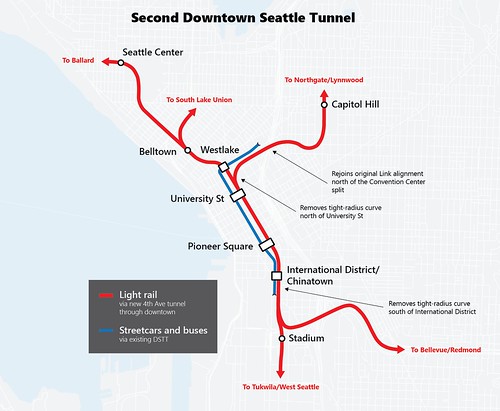 I am also skeptical about this idea. First, because bus stations need to be so much larger to allow for long platforms and passing, building a bus tunnel is more expensive than building a rail tunnel. If you were to do such a thing, it really would make more sense to build another train tunnel through downtown, move the current link line to the new tunnel and then use the existing DSTT for buses again. Second, by having so many buses continue to go downtown, the bus service within West Seattle is not necessarily optimized, eg the natural bus corridor up and down the entire length of California. And third and most importantly, having bus to rail transfers before heading downtown is so much more operationally efficient than continuing with so many buses heading downtown. 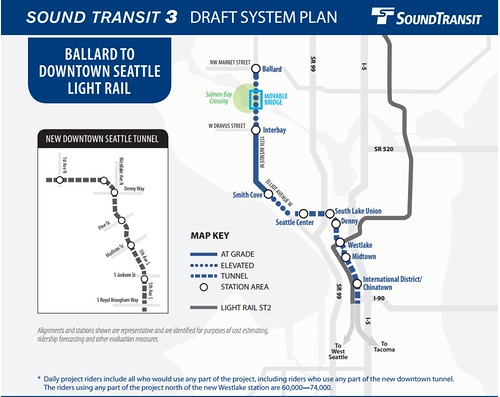 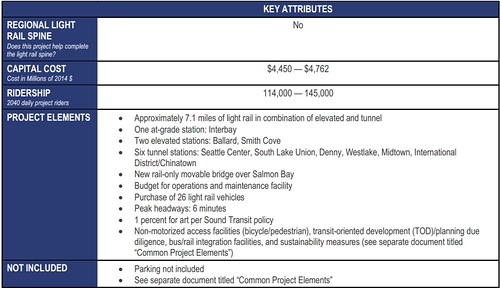 This plan has some serious weaknesses:

My proposal is to reconfigure this line as a bus collector with four stops north of the canal such that any sensible person going to Belltown or Downtown would transfer to the rail line. As a bonus, these four stations also have decent walksheds: 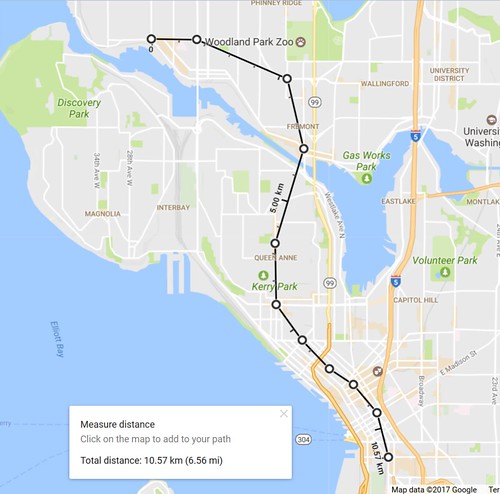 Such a line would naturally be fully grade separated and automated with two minute headways.

The connection off Aurora will have to be somewhat trippy with bus stops on the bridge deck and elevator or escalator access down to the Fremont station underground, probably involving rebuilding some of the buildings adjacent to the bridge deck, but such a connection would be a good one.

Some route options like this proposal was investigated by Sound Transit, but those options were not optimized to encourage bus connections. Even with the lack of optimization, the ridership estimates were unreasonably low. This table from the Ballard Options Study of May 2014 have very low ridership estimates for all of the options studied: 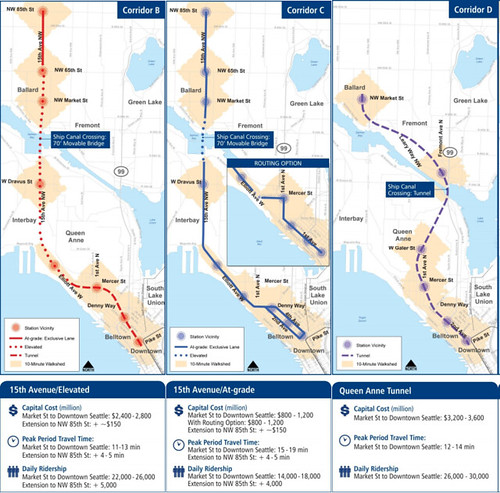 The low ridership estimates for Corridor D were ammunition for criticism of this option on the STB, but the low estimates of all the options shows that bus connections were not optimized or even really considered for any of the corridors. The Ballard Line Comparison Chart of December 2015 had greatly increased estimates for all the options that survived the first round:

I could not find a reason why these estimates went up so much, but they do imply that an all tunnelled option a la Corridor D would have the highest ridership of all.

The current plan skips Belltown in favour of SLU, and it is possible that such a route might have higher ridership, but I haven’t chosen this because it isn’t obvious to me that, fully built out, SLU will have higher employment+residential+commercial density than Belltown. Additionally, SLU does have a streetcar connection to Westlake that can be improved.

The principal improvements over the current proposal are:

On this blog there is big support for a Ballard to UW connection over Ballard to Downtown connection as shown here in comparison with my proposal: 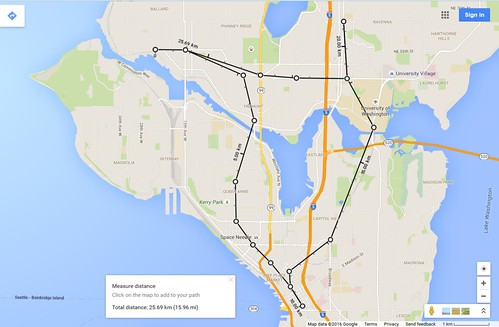 I would not support a UW connection before a downtown connection. First, there is more demand to downtown from both Ballard and Fremont than to UW so it makes sense to serve that demand directly: 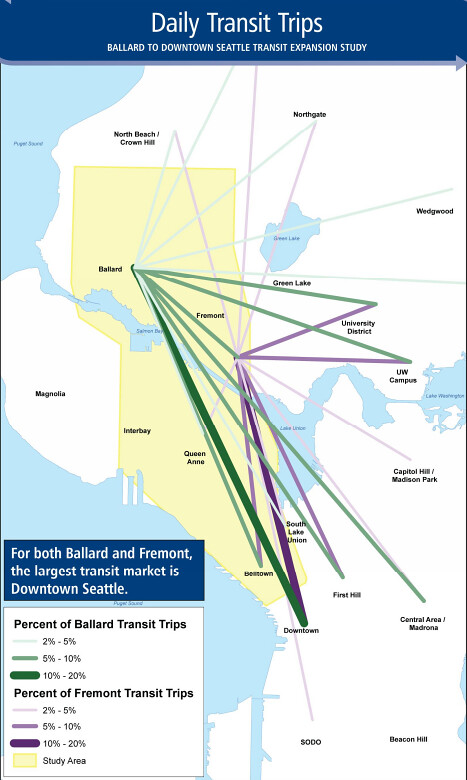 One thing that I have left out is the second downtown tunnel and connection to the maintenance area. Ideally when the DSTT was converted to rail, the possibility of fast interlining ought to have been built in, but it wasn’t, and such ST is committed to a second parallel downtown transit tunnel. If combined with my West Seattle proposal, stations at Westlake, 5th and Madison and Yesler would make sense. Through SODO to the maintenance centre, whether that was located at the current facility, the line would have to be elevated.

One fanciful thought experiment, as if blog-posted transit fantasies were not fanciful enough, would be to use this line as the Rainier Valley bypass line and extend this to link to Link at Seatac at full two minute frequency: 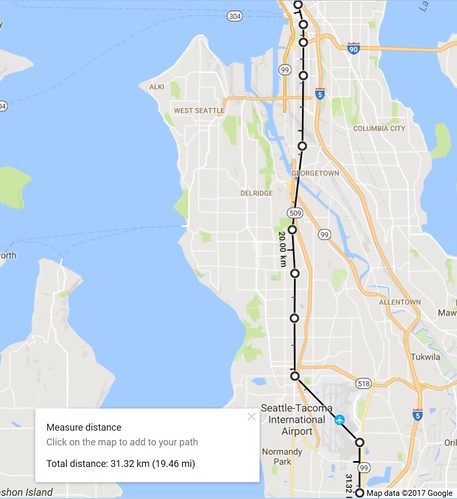 Since there does not seem to be any streetrunning planned for Link from Angle Lake to Tacoma, this could use the automated, short train, high frequency model that is better for transfers.

The Rainier Valley link could then be redirected toward Renton at which is an odd lacuna in ST1 to 3.

I welcome your suggestions.

34 Replies to “Notes from a Vancouverite”