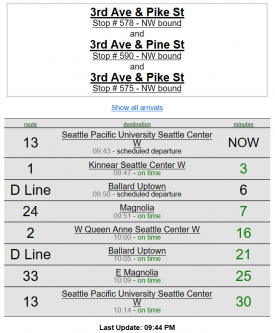 The complexity of our bus system often presents power users with a dilemma. There are often multiple ways to get to a destination, and the bus to take often depends on which one comes first. Sometimes, it’s a choice whether to travel east-west or north-south at start. In other cases, extreme bus density downtown means routes to the same place stop in as many as three different places. Juggling arrival times can be hard. However, there’s an undocumented OneBusAway hack for that.

As reader Tim Bond explains, just type in and bookmark the URL you need. The format is:

http://pugetsound.onebusaway.org/where/standard/stop.action? followed by stuff, where each item is separated by a “&.”

Each stop is represented by an ‘id=1_’ followed by the stop number.

Each route follows its stop number with a ‘route=1_’ followed by the route code, which doesn’t always relate to the actual route number. You can get these numbers by clicking around regular OBA pages.

The result is shown at right.

17 Replies to “An OBA Hack for Multiple Stops”