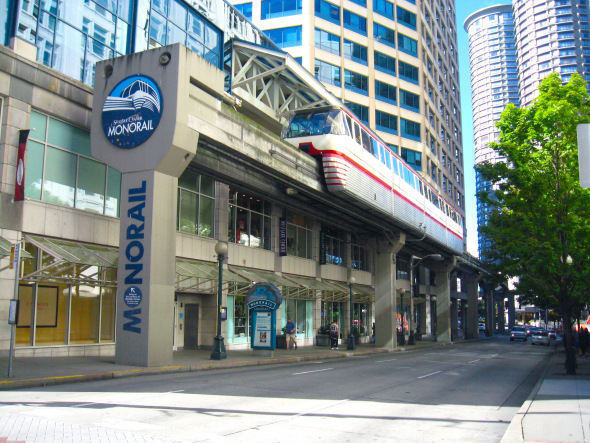 In a press release absolutely buried by other news Thursday, Mayor Murray proposed that the Monorail start accepting ORCA. Back in 2014, STB readers pressured Seattle to study the feasibility of accepting ORCA cards. When that study finished, the city launched a ridership study which completed last April.

The ridership study assumes that the monorail accepts both E-purse and passes. Ridership increases between 155,000 and 346,500 annually (or 7-16%). However, various costs to participate in ORCA and lower average payments result in a first-year revenue hit between $359,000 and $660,000. By the third year, the net effect will be somewhere between a loss of $253,000 and a gain of $122,000. These estimates do not include startup fees that might be assessed by the sponsoring agency, in this case King County Metro.

Mayor Murray proposed a 25 cent fare increase, on top of one already planned for October, to make up for the loss. This would bring the one-way adult fare to $2.75, and the release expressed cautious optimism that it would result in a modest net financial gain.

If all goes well, the Council will approve a budget that includes funding for SDOT staff to complete negotiations with Metro to resolve the remaining issues. Mayoral spokesman Will Lemke doesn’t anticipate big problems because “not a lot of money is moving around.” In an email, Metro said they “see no immediate concerns” with the idea, although the agreement would have to be approved by the ORCA Joint Board.

SDOT wasn’t able to immediately produce a best-case estimate on when riders might first tap onto the monorail, but my sense is that sometime in late 2018 or 2019 is a reasonable guess.

The monorail is one of the few truly traffic-separated transit options in the region. Until Link gets there in 2035, the monorail may be the fastest way to many places beyond downtown when Mercer and Denny are clogged. Also, chances of the NBA returning to Key Arena are climbing, putting stress on roads in neighborhoods that have grown immensely since the Sonics left.

“Seattle Center is becoming more connected to downtown, and the Monorail is the best path between these two important hubs,” said Mayor Murray.