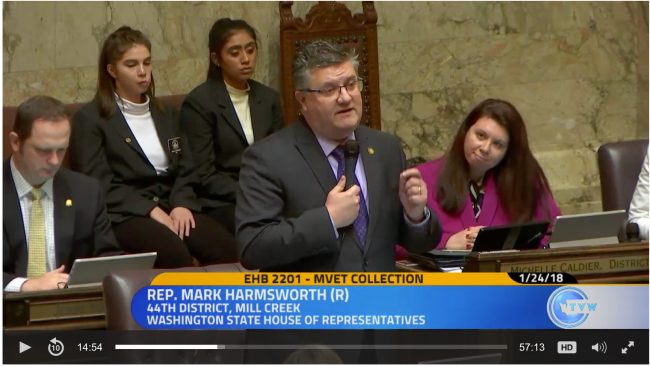 In a 60 to 37 vote Wednesday, the Washington House of Representatives once again passed legislation to lower car tab fees, reducing funding for Sound Transit.

The bill adjusts the rate of the motor vehicle excise tax (MVET) Sound Transit collects. ST3 uses an MVET schedule from the 1990s, which critics say inflates the value of cars and increases the cost of renewing car tabs. Wednesday’s bill would change the valuation system and provide a rebate for past payments.

Many House Republicans argued the bill did not go far enough.

“This bill will provide some relief,” said Rep. Mark Harmsworth (R-Mill Creek) during floor debate January 24. “It even got as bad, Madame Speaker, that we had a bill introduced that has to create a payment program to pay for our car tabs… But we will take what we can right now.”

The bill easily passed out of the chambers last year but then lingered in the Senate.

Not all Republicans supported the bill. Jacquelin Maycumber (R-Republic) voted against it, saying residents spoke when they approved ST3 in 2016.

Though voting yes, Judy Clibborn (D-Mercer Island), a sponsor of the bill and Chair of the House Transportation Committee, promised to make sure ST projects are funded.

“In the Central Puget Sound area, those projects are critical and people have come forward and they are counting on us to make sure that we have the mass transit that gets us through the most booming economy,” said Clibborn on the floor. “We have to have this, it is essential to our economy to make sure we can move people through the Central Puget Sound. We don’t want to leave people off who are on the end of these projects.”

Clibborn told STB she anticipates the Senate will return with a version of the bill that contains offsets which will restore funding and make Sound Transit as whole as possible. She said House and Senate Democrats are working together to establish those offsets.

Rep. Joe Fitzgibbon (D-Burien), who voted against the bill this time, told STB the offsets being considered include allowing ST3 projects, which are eliminated due to future budget constraints, to be eligible for state grants. And reducing the price ST pays for WSDOT right-of-way costs.

Fitzgibbon said legislators are also considering shifting or reducing the amount of money the agency pays into the education fund which all ST3 projects are required by the state legislature to pay into. The fund is estimated to generate about $500 million over 16 years. Fitzgibbon said Pierce and Snohomish counties have voiced support for using the education fund money on transit projects to ensure light rail reaches Tacoma and Everett.

“It would be a hit to the agency, but it wouldn’t be a hit that would jeopardize light rail,” Fitzgibbon said about the bill.

Sen. Steve Hobbs, D-Lake Stevens, who chairs the Senate Transportation Committee, said he was in support of reducing right-of-way costs for the agency and also allowing ST to pay into the education fund only after all ST3 projects are funded.

Also on Wednesday, the Senate Transportation Committee held a public hearing on two bills that would lower car tab fees. No action was taken.

Geoff Patrick, a spokesperson for ST, said the agency is advocating for offsetting measures to ensure that the transit expansion program remains whole.

“That can be accomplished through measures to increase agency revenues or reduce agency costs,” Patrick wrote in an email. “We are emphasizing that any MVET reduction would come amid major threats posed by dramatic inflation of construction and real estate costs, and threats to securing federal funding.”