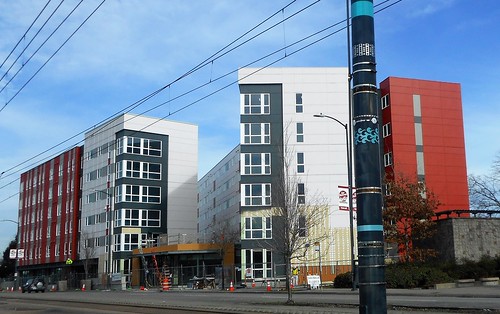 Affordable housing near transit is win-win for both housing and transit. If we build enough of it, not only will residents of this housing have lower rents, but the housing market as a whole will stabilize and improve. Meanwhile, transit riders will benefit from the positive feedback of more riders leading to more service and more support for transit improvements.

The Housing for All Coalition (including Housing Now) is re-launching our campaign for a tax on big business that would raise $150 million a year to build thousands of affordable homes. This tax would go a long way towards funding the affordable housing we need and reinforcing Seattle’s transit oriented future. We hope you’ll join us tonight at 6pm at the Seattle Labor Temple 2800 1st Ave, Seattle, Washington 98121. For more info and to RSVP, check out the event page.

Additionally, Housing Now is starting a new effort to reform Seattle’s comprehensive plan. We’re looking at moving from an “urban village strategy” that confines housing, to a “welcoming communities strategy” that supports and promotes abundant housing. We’re having a general interest meeting on Feb 18th, and we hope to see you there!

We need your support for both of these efforts, see below for more information on why both are important and how you can get involved!

A moral crisis, a practical opportunity

There is no doubt that Seattle faces a profound moral crisis. The city has seen rent increase by over 13 percent last year. Homelessness has risen at the same time: last year over 8,500 people were homeless.

Addressing this moral crisis requires a profound change in how we do housing. The depth of the crisis requires we rethink many things, particularly zoning and taxation. This crisis is also an opportunity for reform in these areas so we can prevent the next crisis.

We need zoning reform so as to allow more housing in the city, with lower costs. Zoning rules that applied when Seattle was a sleepy fishing town, or losing population, simply no longer make sense. There’s no way we can keep constraining multi-family housing to a small portion of the city’s total area and expect to make Seattle affordable. At the same time, we need revenue reform so we can make more of this housing affordable on day 1.

We need more revenue for affordable housing, because new housing is expensive and we live in a society with deep inequality. For many people, wages simply aren’t enough to afford rents. Our social safety net, already frayed and full of holes before Trump, is now under constant attack.

More revenue and zoning reform are two great tastes that go great together. Zoning reform allows more housing of all different kinds, while revenue allows us to build and preserve housing that is guaranteed to be affordable, right now. It also allows us to own the housing on a non-profit basis, thereby ensuring low prices in the long run.

Over 40% of Vienna’s housing is publicly owned or controlled. This housing is high quality, available to people with a range of incomes, and incorporates a range of features, from park space to childcare and beyond. Rents in Vienna overall are stable and affordable, despite the city being internationally renowned for its livability.

Vienna started building its social housing using a combination of a local “luxury tax” similar to our sales tax, and  a Federal block grant. One thing Vienna did not do is attempt to preserve large tracts of low intensity development. They also started out with a high tax on private development, which had the predictable effect of cratering private home creation. Later, after the Second World War they stopped doing this. Today Vienna has new public and private development going on simultaneously.

There is no pure “Vienna model” which we can copy and apply uncritically. Yet we can look to them for inspiration. Vienna raised taxes, sought outside funds, bought land, and built attractive multi-family housing. It’s really not much more complicated than that. Yet at every stage they faced opposition, as will we.

The Homes tax faces opposition from lobbyists for big business. Many of these businesses are quite profitable and will be able to absorb a tax. Others will need to increase prices slightly, which will be offset by more money in the local economy and workers with more disposable income. We can expect the same arguments as those made against Seattle’s minimum wage increases. Yet despite all of the predictions of the sky falling, since the minimum wage increase employment in Seattle has been going strong.

Meanwhile, if we take the long view, more affordable homes will benefit the overall economy, including big businesses. The longer Seattle’s housing crisis goes on, the harder it will be for businesses to ignore the plight of their workers in terms of high rents, crowding, and long commutes. Eventually something has to give. Better that it be investment in housing than some other, less productive responses.

The Homes tax is not perfect, but given the range of options before us, it may be our best option. We must continue to explore paths to more progressive revenue sources. Seattle’s income tax legislation led to a lawsuit, and now Seattle is appealing the lower court’s ruling. We can’t be sure of the outcome of this or how long it will take. Nor can we count on the Federal government coming around on housing, not for many years at least.

You can support this effort by coming to the January 31st re-launch meeting. You can also write your council members and tell them that you support this measure. See here for email addresses and phone numbers.

Also don’t forget to join Housing Now for our comprehensive plan update general interest meeting on 3/11 at 2pm. Seattle’s housing future requires a comp plan that supports affordable housing and making our communities welcoming to all!

60 Replies to “Housing For All: A Win for Transit”