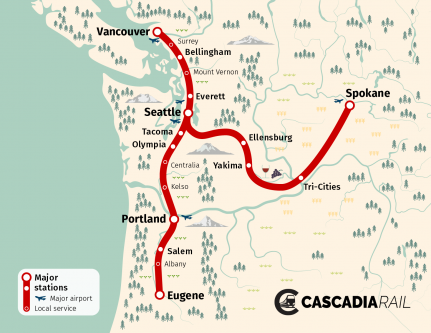 A few years ago, some activists thought to start a group to urge aggressive expansion of the Seattle-area transit system. And guess what…it worked!

But let’s face it. Because our entire region is popular and globally competitive, more is needed to support the growing population across the Cascadia region (combined metro populations of 13.5 million in 2040, up from 10 million today). Every time a mom or a dad spends ninety minutes on a 35 mile commute between Tacoma & Seattle, or 5 hours just to get to Portland, we know something is wrong. WE. DESERVE. FASTER. Our quality of life, and of our children’s lives, depends on it.

That’s why a new group of advocates spanning Vancouver, Bellingham, Seattle, Spokane, Tacoma, and Portland are banding together to connect Cascadia through high speed intercity transport. While Washington State has been studying this, there’s nothing like a mobilized base of support across our region to help make it a reality.

This vision of Cascadia Rail is Vancouver to Seattle and Seattle to Portland connected in less than 90 minutes, and transport to Eastern Washington faster than driving. This is why we believe in it:

Our goal is clear: a safe, fast, high capacity connection between Cascadia cities. Our role will be to advocate with partners to make it possible. Would you like to help make the future a reality? Then join us, follow us, and ask our legislature to approve further study of this concept this legislative session