You know a city becomes mature when its citizens begin to celebrate their transportation history.  London, New York, San Francisco: these are all cities that have been pioneers in the field of transportation and have all embraced their own unique histories of moving people and goods.

Seattle is one such city—and while we are probably best known for pioneering the way people travel the globe by plane, our massive rail network of streetcars in the early part of the 20th Century was really quite remarkable. This network shaped the character of our city and provided critical access to the collection of neighborhoods we have today. And even though these streetcars were removed and replaced by “trackless trolleys”, their threads remain woven into our urban fabric and are still visible in the City we live in today.

As Seattle turns the page to a new chapter, we have an opportunity to connect back to, and embrace this formative part of our unique history. I am a part of a volunteer-led nonprofit, the Friends of the Benson Trolleys and we are spearheading an effort to restore some of Seattle’s vintage streetcars that once ran along the waterfront, and reintegrate them into the city’s streetcar network. 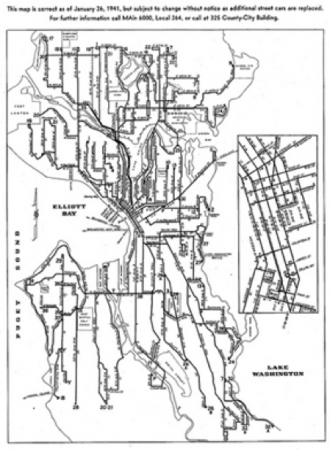 My affection for this mode of transportation comes from many wonderful memories. I have had the honor of witnessing much of Seattle’s transportation history, first hand. As a child in the late 1930’s I rode many of the lines shown on the map above with my great uncle during trips to Seattle. In lieu of a babysitter on these trips, I was given a window seat in the Moore Hotel on 2nd Avenue which afforded a view of Seattle’s streetcars below and captured my attention for many hours.

As an adult, my affection grew as I found excuses to ride streetcars in Budapest, Prague, Oslo, Amsterdam, Toronto, San Francisco, Boston, New Orleans and Melbourne. Professionally, I trained as an engineer and went onto help create and become the first Director of Metro Transit.

My personal and professional passions collided in the late 1970s when I was approached by my friend, and City Councilmember George Benson, who was proposing the installation of a trolley line on our waterfront using 1920’s Melbourne ‘trams’. I jumped at the chance to help–contributing engineering services and funds from my firm to help bring these vintage Australian streetcars to the waterfront.

When George Benson was elected to the City Council in 1973, he was a tireless booster of Capitol Hill, Seattle, and public transit. He also served on the Metropolitan Council’s Transit Committee where he led the efforts to make Metro Transit an immediate success. George’s many contributions to our transportation systems include strong advocacy for the Downtown Transit Tunnel in addition to establishing one of the first vintage rail fleets back into an American city–along the waterfront in Seattle.

In the last year of operation, nearly 500,000 folks rode these vintage waterfront streetcars. But, as everyone knows, the line was ‘temporarily’ discontinued in 2005 to make way for the construction of SAM’s Sculpture Park. While King County has taken great care of these cars, they remain in storage today, thirteen years later awaiting their next chapter in Seattle’s history.

Our coalition believes that George’s legacy and these beautiful vintage streetcars must be restored and brought back to use in some fashion. Now, coordinating with SDOT and Metro Transit executives, a group of us are working to preserve them. Thanks to feasibility studies commissioned by the governing boards of SAFECO Field and Century Link as well as SDOT, we know it would have been feasible to return these cars to waterfront. However, as plans for the new streetcar system and waterfront projects have evolved, the streetcar infrastructure investments were redirected to First Avenue.

In order to proceed with the restoration and reintegration along this new route we will need more information, which is why on February 1st, we launched a 30 day Kickstarter campaign to fund a new engineering/feasibility study to determine how best to integrate these vintage cars into the city’s streetcar system. If, or should I say ‘when’, we are successful we will commission a study to evaluate options to power the cars (batteries or voltage reduction from the existing higher voltage overhead contact systems), determine the cost of restoring dual-side loading capability and checking the braking system for adequacy.

There is great community support for these streetcars. We have been contacted by hundreds of people expressing their support for this restoration and reintegration effort. We have a large mailing list of supporters, many of whom have contacted local leaders and continue to demonstrate strong support. When the vintage Benson trolleys are placed in service on Seattle’s streetcar network, they will tie together our city’s most significant historic sites of the Chinatown-International District, Pioneer Square, the Pike Place Market and MOHAI and inspire a new generation to connect with our city’s transportation network and unique history.

If you’d like to see some of our transportation heritage preserved please voice your support on our website and back our Kickstarter campaign by the end of the month.