Thursday, Sound Transit’s Operations and Administration Committee moved forward a staff recommendation that would establish a flat fare of $3.25 for all Sound Transit Express bus routes. This change would increase fares by $.50 for 70% of ST Express riders.

The transit agency said this change would speed up boardings and make it easier for riders to understand the fare system. The full board is expected to vote on the proposal at its March 22 meeting, with implementation July 1, 2018 to coincide with Metro’s new $2.75 flat fare.

Sound Transit proposed two options: a $3.25 flat fare, or keeping the current system but eliminating the override for one-county riders on two-county routes. The agency said its goal was to simplify fares and have the change be as close to revenue-neutral as possible. 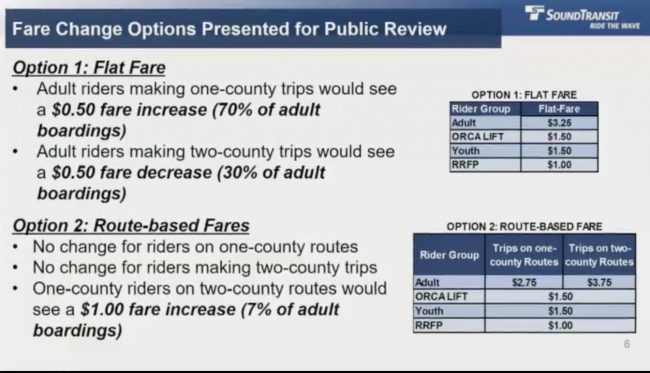 Before fares can change, ST must perform an analysis to determine how the changes would impact low-income and minority populations. The agency said “neither option would create a disproportionate impact on low-income riders.” ST staff also recommended conducting ORCA LIFT outreach to ensure all riders who qualify for the program are enrolled.