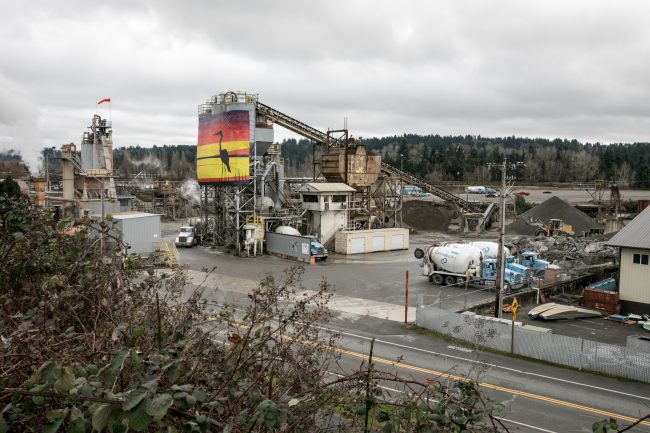 Kenmore wants to bring a new mix-used development to the shores of Lake Washington and eventually replace the cement and asphalt plants.
Credit: Lizz Giordano

Home to one of the last remaining industrial ports on Lake Washington, the city of Kenmore longs to shed its manufacturing past and cultivate a new identity. Nestled at the top of the lake, the bedroom community wants to give passers-by a reason to stop.

“Rather than just fixing potholes and writing traffic tickets, we wanted to be about building community and getting people connected to each other,” said Rob Karlinsey, Kenmore’s city manager.

To do that, the city became a developer. Several years after incorporating, Kenmore bought a dilapidated 10-acre lot and resold the land after placing certain conditions on the parcels. A couple of economic cycles later, Kenmore’s new town square is taking shape — a year-round community space, 300 units of multi-family housing, and a medical clinic replaced an abandoned park-and-ride lot and a run-down grocery store.

“The new town square area is giving Kenmore something residents never had before, which is a place for people to gather,” said Mark Abersold, a current resident who moved to the city six years ago.

“We are hoping for a ripple effect that will be a catalyst for more redevelopment,” Karlinsey said, proudly showing off the new town square to the STB.

The city also began investing in non-motorized improvements, mainly adding and widening sidewalks throughout the city. In 2014, after both a cyclist and a pedestrian were killed in marked crosswalks in a span of four days, the city and the community pushed for even more street safety improvements. That same year, the city council adopted the goals of Vision Zero to eliminate all traffic deaths and serious injuries by 2025.

To make progress toward Vision Zero, the city installed rectangular rapid flash beacons at 18 intersections and gave a major arterial a road diet. Since then, the city has achieved bronze-level recognition from Walk Friendly Communities and the League of American Bicyclists.

Residents showed their support for the additional pedestrian and bike safety improvements, approving the city’s first bond measure last year. Passing with 64% of the vote, the “Walkways & Waterways Improvements” measure authorized almost $20 million in funding. Roughly half of that will go toward pedestrian and bicycle safety projects, while the rest of the bond is earmarked for waterfront park improvements.

“Every city wants to build more sidewalks and many talk about making improvements, but Kenmore actually made the improvements,” Abersold said.

David Baker, Kenmore’s mayor for over a decade, hopes development will soon reach all the way to Kenmore’s lakeshore, replacing the remaining industry.

For decades, the city has been cultivating a plan for a mixed-use development, Lakepointe, on over 50 acres of lakefront property adjacent to cement and asphalt plants. The land, which was used by WSDOT as a landfill when Interstate 5 was under construction, needs to be stabilized before the site can be developed. The extraordinary upfront cost needed, estimated at over $100M just for stabilization, has caused the site to languish undeveloped.

“The cement plants were great when we were rural, but it doesn’t fit anymore,” Baker said.

Karlinsey said while many interested developers have come and gone over the years, he sees real potential with the Kirkland-based developer, Weidner Apartment Homes. The company, which has also begun acquiring additional property surrounding the Lakepointe site, has been very engaged on the project for the last three years, Karlinsey said. Though still many years out, the city is expecting the Lakepointe development to create at least 1,200 housing units and over 600,000 square feet of retail and commercial space.

At the top of Lake Washington, Baker’s grand vision for his city expands beyond the city’s lakeshore to Seattle, where Baker is optimistic a new ferry route will eventually run. He said the city is number one on King County’s list for a new passenger ferry route.

“You can’t force things to happen,” Baker said. “But what you can do is plan, and you can put the policy framework into place to allow it to happen. That’s what we have been trying to do for the last 19 years.”

18 Replies to “Kenmore: Casting off an Industrial Past”