Community Transit plans to expand once again, restoring pre-recession frequency on the Swift Blue Line and re-routing local buses for better connections and usability. The service expansion proposal covers Fall 2018 and Spring 2019 and would add about 49,000 annual service hours (12 percent over March 2018). It would be funded by the 0.3% sales tax increase approved by voters in 2015, as well as a 25-cent increase in fares for local and DART service due in October 2018.

In Fall 2018, the Swift Blue Line would be restored to 10-minute weekday headways that the line used prior to the recession cuts in 2012. An additional early morning trip would be added at 4:20 a.m., while headways on weekends and on weekdays outside of the 6 a.m. to 7 p.m. window would remain at 20 minutes.

At the same time, 13 mid-day and late evening trips would be added to Route 413, expanding into an all-morning peak-direction option between Lynnwood and Downtown Seattle. Southbound trips would depart from Lynnwood until approximately 11 a.m., and the first northbound trips would depart from Downtown Seattle around 1 p.m. Community Transit anticipates that the new trips would provide better flexibility and encourage greater use of the Swamp Creek Park and Ride adjacent to Ash Way, both of which are served by Route 413. As a bonus, Route 413 uses the 5th & Columbia express lane entrance, which gives late morning commuters an option to skip the congested Stewart offramp and travel faster to the south end of downtown. 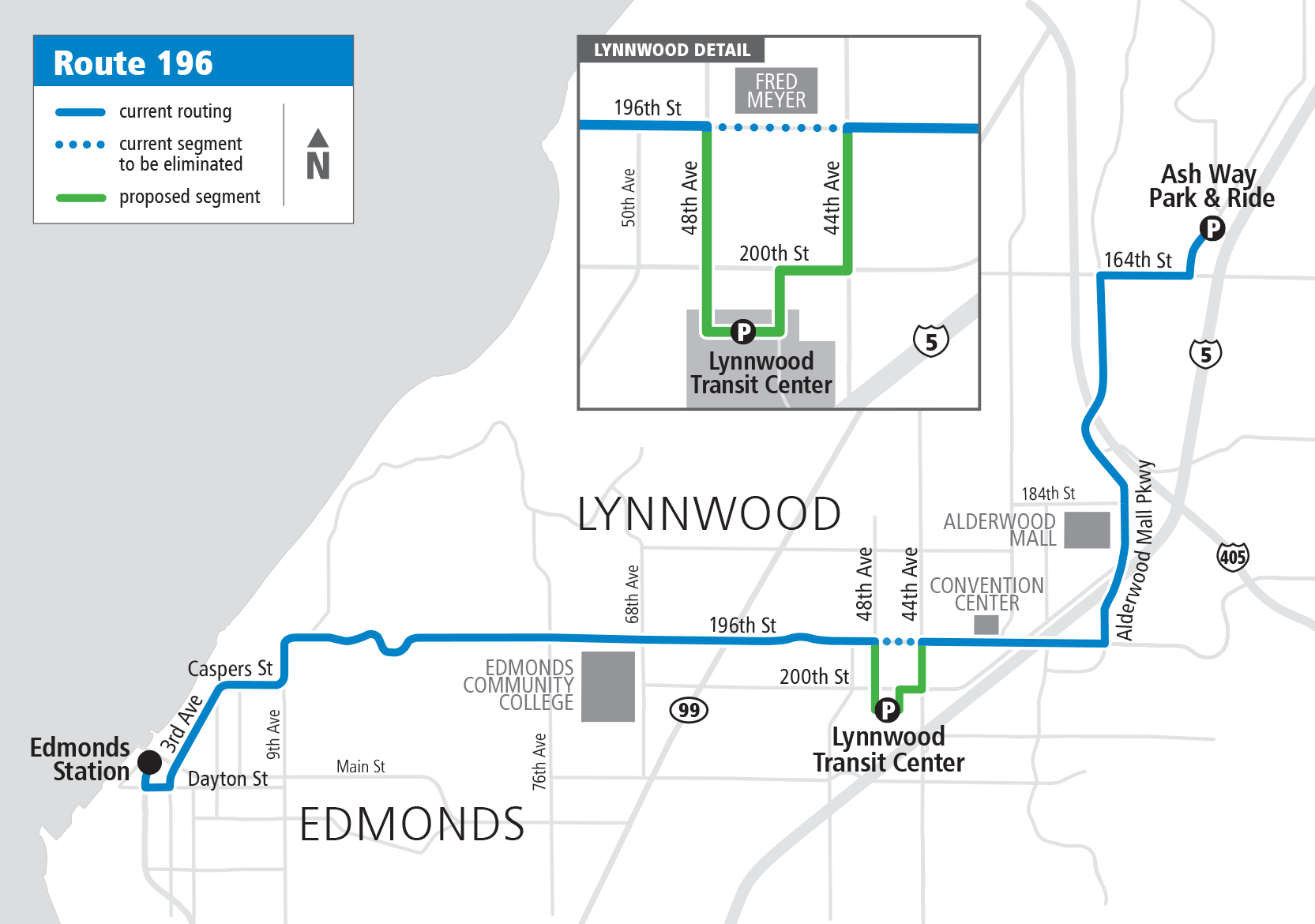 The remaining changes for Fall 2018 would introduce short deviations to two local routes: Route 109 would move off of Highway 9 in Lake Stevens and take 99th Avenue instead, serving nearby residents and businesses. Route 196 would be moved yet again to intercept regional buses, this time finally serving Lynnwood Transit Center. In the process, buses would need to make an additional six turns and skip serving a four-block stretch of the street (dominated by the Fred Meyer, which has Route 112 service), but the change would make connections from North Edmonds to the rest of the county much easier. It would also introduce a slightly faster option between Downtown Edmonds and Lynnwood Transit Center, compared to Route 116 (which makes several zig-zag turns of its own).

The Spring 2019 service change would be triggered by the opening of the Swift Green Line and its northern terminal at Seaway Transit Center, in the middle of Boeing’s Paine Field complex. The Green Line would launch with 10-minute weekday headways and 20-minute weekend and night service, traveling through south Everett, Mill Creek, and to Canyon Park in northern Bothell. Route 105, which already runs along the whole Green Line corridor during peak hours and the segment from Mariner to Canyon Park at other times, would be retained and act as the Green Line’s “local shadow”, similar to how Route 101 complements the Blue Line.

Most of Community Transit’s current peak-only buses to the Boeing Everett complex would be truncated to the transit center, no longer making the long and circuitous loop around the assembly plant to the flightline. Boeing workers would transfer at Seaway Transit Center to company-run shuttles, which will have their own designated pick-up and drop-off zones similar to the old Overlake Transit Center on Microsoft’s Redmond campus. Boeing already runs full-sized bus shuttles (pictured above) around their Renton campus and runs a few van routes around Everett and Mukilteo. In addition to the truncation, Route 107, the peak-only route from Lynnwood, would also deviate onto 84th Street on the west side of Paine Field, picking up a new bus stop near the Future of Flight Museum.

Effective October 1, 2018, the fares for local and DART paratransit service would be increased by 25 cents for all riders. This would be the first increase since 2015 for adult fares and 2013 for youth and reduced fares. The commuter routes would use a simplified fare (as proposed last year for ORCA 2.0), but would go further and eliminate the $1.25 surcharge for commuter routes that travel to cities to the north and east of Everett. This change would allow for riders to continue using these commuter routes, which pick up passengers at Lynnwood Transit Center, for the same fare and prevent overloading of South County routes. A minor increase to vanpool rates (averaging $14 per month per van) would also be included in the fare change.

And speaking of vanpools, Community Transit is exploring a pilot vanpool service aimed at bridging the last-mile gap for bus riders. A flat rate of $175 per month would allow a group of riders to borrow a vanpool and drive to homes and offices within a 20-mile round-trip.

Community Transit will receive feedback on the service and fare changes until the end of April 6, via the following modes: