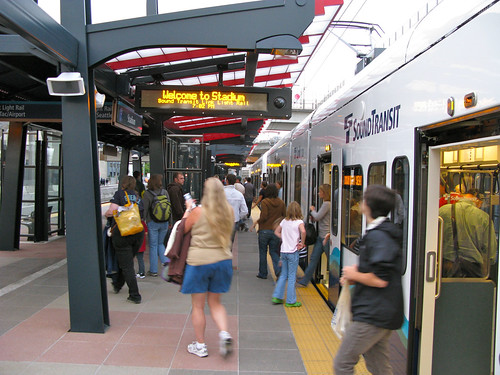 Thanks to a sponsorship deal with the Mariners, for the first two months of the season both digital and printed baseball tickets also serve as a valid Link fare. Until June 3rd, riders can present the ticket for that day’s home game to fare enforcement up to 3 hours before first pitch (typically 1:10 or 7:10) and through the end of the day.

To further eliminate excuses for skipping the train, Uber is discounting rides to the two Link terminal stations (UW and Angle Lake). Even though Sounder and ST Express aren’t included in the deal, a broad segment of the region now has an inexpensive means of avoiding game traffic entirely.

ST spokesperson Kimberly Reason says that the arrangement with the Mariners is a pilot. The finance staff estimated the agency makes about 24 cents per Mariners attendee (whether or not they take the train). At the end of the pilot, the team will write a check based on the attendance over the entire period.

A fare-free transit system isn’t good for most transit riders until other revenue streams fund transit service beyond the point of diminishing returns. However, an ideal (but unenforceable) framework would charge regular users a flat fee to fund the system while letting everyone use the system occasionally for free. This gives more people a stake in the system, makes the marginal cost of riding zero, and eliminates the friction of handling fares from those infrequent users.

Deals like this one provide small glimpses of that ideal system. By (in effect) giving Sound Transit a cut of baseball ticket revenue, a large number of novice riders don’t have to mess with fares and have strong incentives to ride. Let’s hope it makes enough of a measurable difference that all parties decide to continue the experiment.

46 Replies to “A Mariners Ticket is a Link Fare, Through June 3rd”