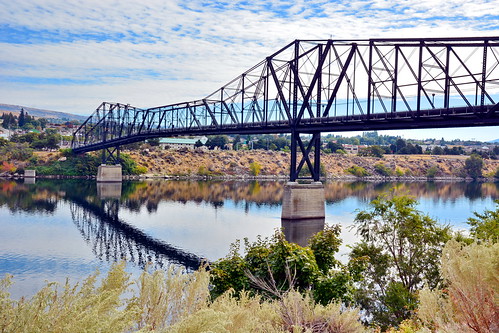 Nestled by the confluence of Wenatchee and Columbia Rivers, the City of Wenatchee is framed by some of the most dramatic scenery in the state. A small urban core of about fifty thousand people, squeezed into a bench around the confluence, serves as the primary urban center for a huge rural hinterland that extends roughly from Leavenworth at the southwest, Ephrata at the southeast, and 145 miles east of north up US 97 to the Canadian border. I think of Wenatchee as the gateway to Washington’s Big Sky Country, and it seems many other visitors are similarly taken, as the area is struggling with a housing affordability crisis ($).

Wenatchee is a railroad town, and it owes its location primarily to the choices of the Great Northern. Headed west from Saint Paul to Puget Sound, the GN crossed one of its major obstacles, the mighty and wild Columbia, at its narrowest point in Washington, before threading its way up the Cashmere Valley towards Stevens Pass. That westerly alignment, which made Wenatchee well-connected in the era of the railroad, has made the city an island in the age of the macadam road: there are exactly two road bridges carrying one paved road, WA 285, through the urban core, which can suffer startlingly bad car congestion given the small population.

The political and business leaders of Wenatchee have exhibited more progressive thought around transportation policy than one might expect. While the north end of Wenatchee Ave is a hellscape of roaring engines, drive-thrus and giant parking lots, the downtown business association formed a LID in 1989 [PDF page 40] to convert the historic central section into a calm, pedestrian-oriented street. WSDOT-owned land riverfront land on the east bank of the Columbia, once slated for a freeway, has become part of a non-motorized trail system, which notably includes a historic bridge over the Columbia initially designed for wagons and irrigation pipe. The city recently engaged the marginalized South Wenatchee neighborhood in a subarea planning process that yielded safe walking facilities as the top priority.

In a similarly forwarding-thinking vein, Link Transit was founded in 1989 to provide transit service to Chelan and Douglas counties. Today, the agency provides all-day bus and paratransit service throughout the urban core, with a more skeletal service radiating out to smaller towns along the US 2, US 97 and WA 28 corridors. In 2009, Link pioneered battery buses on a set of short, high-frequency urban routes — a bold move for a small agency. This November, car-free mobility in north-central Washington will take another big step forward if voters approve a 0.2% sales tax increase for Link. This ballot measure arises from a planning process which found that residents both wanted more transit options, and were willing to pay for it.

To find out more about Link’s plans, I exchanged emails with planner Lauren Loebsack.

STB: Could you describe for my readers the current level of service offered by Link?

LT: Internally, we refer to our level of service as “enhanced basic access”. Our service span is about 6AM to 7PM on weekdays and fewer route on Saturday running about 7AM to 6PM. We can get you to where you need to go, but some places, such as the small towns or outlying residential neighborhoods, don’t yet have even hourly service, and our Saturday service is pretty lean. But within the downtown, around the college and across the George Sellar Bridge [between downtown Wentachee and Valley Mall in East Wenatchee], we offer 15 minute frequency through most of the day.

STB: Could you talk about the battery trolley service and the history of that?

LT: The battery electric bus effort has been challenging at times — we have been at the forefront of the technology and that comes with unique challenges.

We started this journey in 2007 with e-Bus, and we are still able to keep those buses in service, however the batteries did not prove to be able to handle the cold of our winters and the heat of our summers. But we still run them as much as we can, they do a lot of heavy lifting in the downtown on our “Current” service line- our urban, high frequency, electric bus service. We have three routes (Current A, Current B, and Current C) and those provide 15 minutes service during the day with our Current A being our highest ridership.

We are now working with BYD and they have been incredibly committed to making this technology work for Link. We just installed our first fast charger, which will be tested on a retrofitted BYD in the coming weeks. And fast charging will be what truly makes this electric bus technology work for us; at this time we have to program in time into the run cut to charge these vehicles with a slow charger during the day. Once we are able to fast charge the BYD buses, the ballet of slow charging can end and we can deploy all of our buses into the service area. Our community consistently supports our efforts to move to an electric urban fleet and that goal remains unchanged for Link. We now have 10 electric buses and are looking to grow that to 15, once this fast charging work and a few other technological wrinkles are ironed out. Our region is a lovely, natural place and we want to be part of protecting that, as well as the smart move to take advantage of our low rates for hydroelectricity.

STB: Could you give me an idea of what new services you’d offer, and what the final level of service would be like, if this tax is approved?

LT: As anyone in transit knows, the traveling needs of a community are dynamic, so some details may change as time goes on. However, during our public outreach on this topic in 2016 and 2017, we received a consistent message: better Saturday service, Sunday and some holiday service, and later/earlier service. Our area has undergone big changes in the last decade as tourism has grown and workers of non-traditional schedules need to travel between cities in the region to access their employment. We are also hearing an interest in choice ridership for recreation and “stay and play” style tourism service.

So first we would fill in Saturday service and implement our Sunday service- these were the top responses to our surveys on the subject. I foresee Link also expanding our weekday service at that time, depending on resources (the board is committed to a phased in approach to the proposed increase, from 0.1% for two or three years, to 0.2% after and the number of years of the phase in has not been settled). Next we would begin expanding our service area; some neighborhoods have been specifically called out for service during our public outreach and we’d like to improve service to and within the smaller towns and neighborhoods in our service area. Particularly as the population and tourism have increased, we’re seeing timing impacts to our commuter routes as we enter into these areas.

Additional funds would allow us to implement local circulators within these areas that draw our guests out from these neighborhoods, to trunk lines, and to really enhance the element of our service we take pride in: connecting communities.

Finally, implementing high frequency trunk lines, so that within the urban corridor and along the major highway routes, someone interested in riding doesn’t have long to wait for a direct trip between major transit nodes. I believe that this could be the biggest draw to choice ridership, reducing the wait time and thereby enhancing the convenience of the choice to use transit.

STB: What speed/reliability/other capital investments would be included in the package?

LT: We have taken small steps toward implementing what we refer to as a “BRT Lite” on US 2 between Leavenworth and Wenatchee. We have a robust commuter ridership there, but what we continue to hear is that the travel time does not compete with driving. Creating that infrastructure, from planning the stops, purchasing the right-of-way and developing the facilities will likely be one of our first capital efforts. To create truly distinct commuter routes and local route will speed up those travel times and increase reliability. Should that “BRT Lite” style service prove successful, I foresee Link using that as a template for implementation of similar service on US 97, US 97A and WA 285.

STB: Could you outline the Confluence Parkway effort, and how Link would leverage that potential new road into Wenatchee?

LT: The Confluence Parkway has been adopted as the regional preferred alternative to address mobility issues and Link Transit has been a member of the stakeholder group from the beginning. The leaders in our region understand the importance of transit as part of a larger solution for moving people safely and effectively and the transit element has always been a big part of the discussion.

Since the original development of a bypass-style parkway plan, this project has seen a lot of changes. What the final result will look like will obviously influence how we serve that route. The original plan was to use this parkway as a direct route for deadheads, getting those buses off North Wenatchee Avenue that are not in service to help alleviate the congestion there and reduce our deadhead time. The plan for Confluence Parkway now sounds a lot more like an alternative access, with slower speeds and with more access and discussion has moved back to finding solutions on North Wenatchee Avenue, options such as queue jumping. This would be another new experience for Link and we are excited to see what the future holds and glad to be part of the discussion now.

10 Replies to “Wenatchee’s Link Transit Goes to the Ballot”