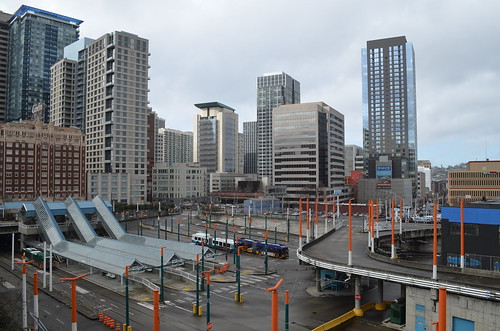 On May 1st, Seattle’s Transportation and Sustainability Committee reviewed the alley vacation for the Washington State Convention Center expansion, which will close the Downtown Seattle Transit Tunnel to buses. The core measure passed unanimously, but the most interesting discussion centered around exactly when buses would have to leave the tunnel.

The question has come down to the tunnel closing in March or September 2019. Either date would coincide with the regular Metro service change. If the WSCC gets its master use permit from SDOT by July 1st, it can start in March. However, SDOT cannot guarantee that the remaining street improvements meant to mitigate the bus congestion will be ready in time. Councilmember Mike O’Brien’s legislation would have attached the condition that the developer could not kick buses out prior to September. Councilmember Rob Johnson introduced an amendment that would strike this language, making the city’s position neutral in discussions between King County and the developer. The amendment passed committee 4-3*, so it will go before full council on Monday without any timing conditions attached.

Prior to Council deliberation, SDOT staff presented the state of affairs and answered clarifying questions. The One Center City process is intended to address the “period of maximum constraint” — making sure people and buses can still flow through downtown when buses leave the tunnel, the viaduct comes down, and SR99 tunnel tolls divert traffic. This period would end as they haul away the viaduct debris and light rail gets to Northgate in 2021.

Of many ambitious ideas, the short-term SDOT plan has whittled down to three main things (see 54:00 in the video):

In addition to the SDOT work, of course, there is a Metro/Sound Transit process looking at restructures to stop buses at Link stations before they reach downtown. Those were out of scope for today’s discussion, as decisions there are not even close to final.

WSCC Developer Matt Griffin (1:34:30), a self-identified “bus guy,” nevertheless made the case against another six-month delay for his project. It would introduce further uncertainty in an already complicated project, raise costs, and delay delivery of urgent public benefits like middle-income jobs, $16m for the bike master plan, and affordable housing.

Metro’s Bill Bryant stepped in to clarify the numbers. In the afternoon peak, 40 buses per hour travel in each direction in the DSTT. The 5th/6th transitway is expected to absorb half of that, and 3rd avenue improvements might recover just enough capacity for the rest.

The committee then engaged in an interesting and thoughtful discussion (2:19:00). Everyone is interested in an early start for the WSCC, to varying degrees. Councilmembers Bagshaw and Gonzalez seemed dissatisfied with the squishiness of SDOT’s estimates, interested in more stringent car restrictions on 3rd, and observed that if we give them six more months, it will likely take six more months — a dynamic familiar to anyone who’s ever run a project. They speculated that the earlier deadline might concentrate minds and allow early delivery, or at worst a very short period with no transit priority.

Other members, notably Mr. O’Brien and Lisa Herbold, were reluctant to overrule the estimates of their in-house technical experts. O’Brien, in particular, pointed to a recent project briefing that suggested that even an immediate start would allow buses to use the right-of-way well into summer 2019, meaning keeping buses in the tunnel till September would only cost the WSCC a couple of months. He also argued that keeping buses in the tunnel longer will shorten the period of maximum constraint, provide flexibility to respond to unexpected developments, and lighten the resulting congestion problem overall.

In a later conversation with STB, O’Brien emphasized the flexibility point. Even if the 5th/6th transitway were complete by March, there would be value in having the DSTT capacity to respond to problems with the introduction of SR99 tunnel tolling and shortening the time where transit will suffer most. “I would like the public to know that the City Council thad the option to delay [maximum congestion] for six months and chose to prioritize other things,” O’Brien said, “I hope I’m wrong, but I think we’re going to regret it.”

However, he isn’t planning to reopen the issue in Full Council on Monday. Instead, he may introduce an amendment requiring $50,000 from the WSCC to fund the creation of a plan for spot improvements. There were would be specific congestion metrics that would trigger a further $1m payment to fund items from that plan.

* Johnson, Bagshaw, Gonzalez, and Mosqueda for the amendment. O’Brien, Herbold, and Sawant against.