Back in 2014, Seattle voters approved a $60 license fee and 0.1% sales tax for a Transportation Business District (TBD) that would fund bus service through 2021. Originally conceived as a way to avoid bus cuts after a countywide measure failed earlier that year, before the election this was re-framed as an opportunity to increase bus service on overcrowded and/or unreliable corridors that mostly lie within the City of Seattle.

So far, so good. But Metro doesn’t have the bus base capacity or drivers to run all the service Seattle wants to pay for: 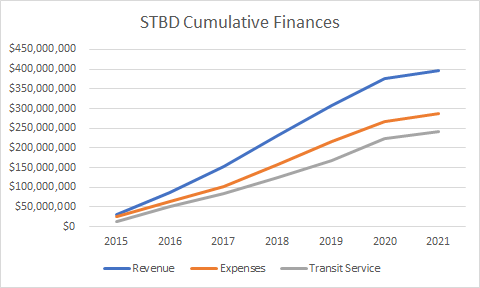 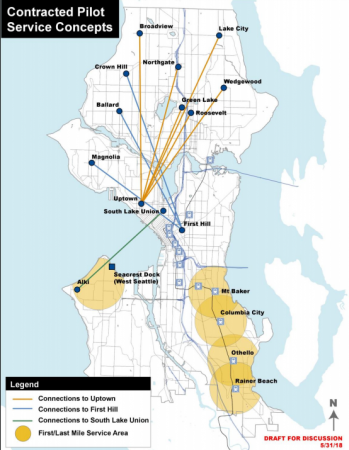 Given this problem, or opportunity, the Council’s Sustainability and Transportation Committee on June 5th endorsed some amendments to the STBD to allow several new initiatives:

The changes sailed through the committee with only minor amendments, but Committee Chair O’Brien postponed the scheduled June 11th review by the Full Council. Kevin Schofield reports that the two-week delay is because labor has some concerns about the fourth provision.

It’s probably not surprising that a town like Seattle would have second thoughts about partially privatizing transit services using non-union vendors, even when there is no alternative. However, one might also wonder how effective these services will actually be. It’s hard to scrutinize a concept with essentially no details, but there’s a reason Metro doesn’t send many smallish vans buzzing around second-order demand lines: it’s a very expensive way to serve a small number of people, however much it improves the lot of a handful of riders. Indeed, some of discussion in June 5th’s meeting cast doubt as to whether the new routes would even make up the 3,000 car trips the city is looking to eliminate during the period of maximum construction through 2021. One hopes that this program would provide reasonably direct and frequent routes while remaining extremely well-integrated with the network of Metro buses. If it does, it would be a worthy augmentation to our transit system.

60 Replies to “Seattle May Revamp its TBD”