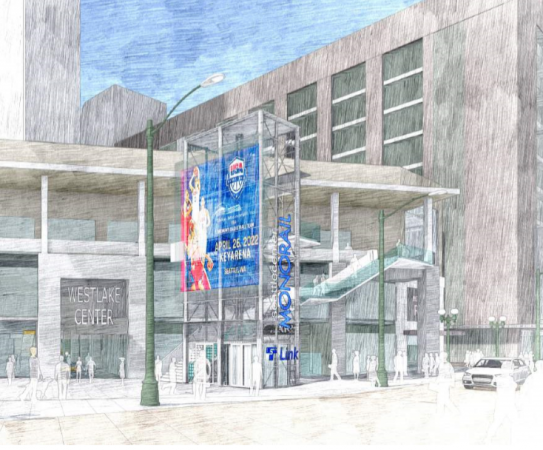 Earlier this month, VIA architecture released its study of the potential for higher capacity and usage of the Seattle Center Monorail. Though activists had been asking for years for ORCA integration to bring the independent line into the fare system, it was the commitment to bring big-time sports back to Key Arena that finally made Seattle serious. Mike Lindblom summarized the key figures ($) in the study.

VIA identified a series of improvements that could double the monorail’s capacity to 6,000 people per hour per direction. Each train can hold 300, but 250 is the maximum for timely boarding and deboarding. More than 6,000 would have diminishing returns: at off-peak times today Link can comfortably carry about 2,700 people/hour, expanding as Link goes to higher frequencies and 4-car trains in the 2020s.

To get there, the monorail has to fix the cluttered station arrangement at Westlake and make it faster for people to get on and off the trains. Faster loading and unloading (a ponderous process today) can get headways down from 5 minutes to 2.5. The trip itself only takes 90 seconds. 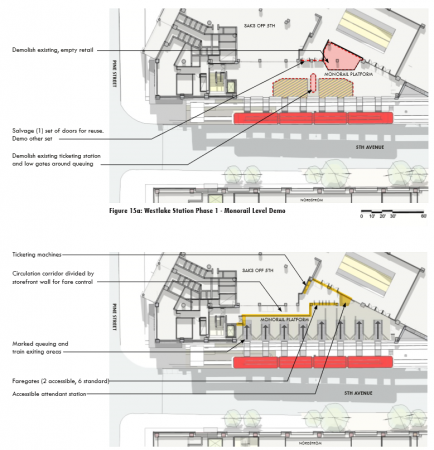 Phase 1 at Westlake would cost $7m. It involves staffing both stations at all time (today the driver also sells tickets at times), keeping Westlake Mall open, and expanding the station area as shown at right. The Seattle Center end would make fixes to platform gates, level boarding, and so on.

Phase 2 is $13m for better “vertical connectivity” at Westlake: by demolishing the retail area on the left side of the diagram, there is frontage for elevators and escalators facing Westlake Park. The two new elevators will go all the way down to the DSTT, where the Westlake Mall tunnel entrance is today. The changes increase visibility, improve flow, and allow the Mall to close while the monorail is running. At Seattle Center, it reduces steps to the train at some entrances.

Phase 3, $3m, would add a North entrance to the Seattle Center station.

The study also examines a Belltown Station, near Bell Street, for $40m. This adds 2 or 3 minutes to each trip, forcing headways back down to about 5 minutes. Because this would reduce event capacity, the study recommends that this not open until 2035, when Link’s Seattle Center station takes some of the demand away. A Belltown Station, however, would make the Monorail relevant long after ST3 is complete.

2020 is the target date for Phase 1, to coincide with the Key Arena reopening. However, there is no funding stream today.

Though not in the study document, Lindblom’s reporting confirms that the fare gate modifications would include ORCA acceptatnce.

63 Replies to “Monorail can be HCT, Study Says”