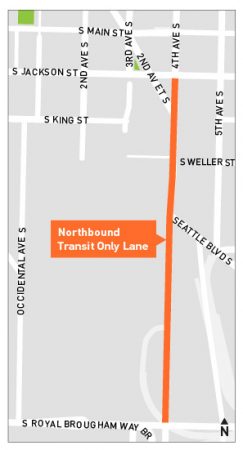 SDOT announced last week that a key stretch of 4th Ave S will get a bus lane this Fall. The project extends the existing northbound bus lane between Jackson and Weller further south to Royal Brougham Way. This lane will be 24/7, though cars will be allowed to turn right. SDOT will paint the lane red.

The project does not currently include a queue jump at S Weller St to assist those buses that shift lanes, but planner Jonathan Dong says that a queue jump is a “great idea” that is “worth exploring.”

The project, which also changes Seattle Blvd S to a double right-turn lane to improve transit times, will cost $149,600.

While the big picture is pretty grim at SDOT right now, we can take small comfort from dedicated professionals who are making incremental gains for transit at this scale.

You can submit comments to Jonathan.dong@seattle.gov.

Update: the transit lane proposal has been adjusted based on Metro’s input. Improvements are scheduled for August 2018.