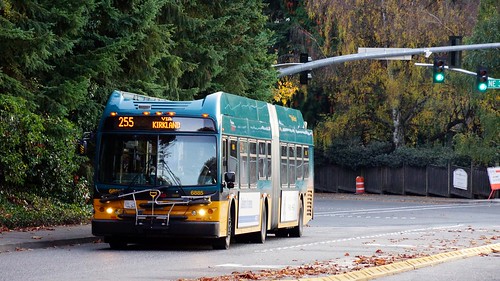 Metro and Sound Transit have a new proposal to restructure bus service on the “North Eastside” in order to take advantage of new opportunities arising from University Link and improvements in the SR 520 corridor. Metro abandoned a previous effort to make similar changes right after U-Link opened due to a perceived absence of public comment. Riders interested in increasing the utility of the bus network to get multiple places in a short amount of time should be sure to comment this time.

While University Link was a squandered opportunity, three new stimuli are coming: closure of the Downtown Transit Tunnel to buses in March 2019, closure of the Montlake Flyer stop, also in March 2019, and Northgate Link opening in 2021. Beyond that, East Link and I-405 BRT will provide yet more options. Riders will have to deal with the immediate challenges using the existing network next summer, but in September 2019 there could be a restructure with the following ingredients:

Existing freeway peak expresses to Downtown Seattle would not change, so most people still have their rush hour one-seat rides into downtown Seattle. More on the changes below. 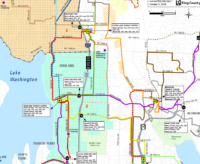 The new Kirkland transit network is a little hard to get your head around without particular source/destination pairs in mind. It is not really a gridded design, though it’s a bit closer than the current network. Metro took a shot at summarizing the tradeoffs for each neighborhood. Broadly speaking, there are fewer buses crossing I-405 again and again, which should probably help reliability and be more direct.

The long-overdue Montlake triangle improvements would have many, but not all, routes serve the station and campus sides instead of the hospital side. There would be a dedicated left turn signal to turn onto Pacific Place. The agencies estimate a 6-8 minute walk from train platform to bus stop. Metro intends these improvements to make the transfer to U-Link palatable.

A stop at South Kirkland might be time-consuming for through riders, but it does provide good transfer opportunities.

There are public meetings on these proposals across the Eastside, from today through November 7th. There is also an online survey.