@danjryan @kptrease @MikeLindblom @fchi Now that the midterms are over and it feels safe to focus on (still important) minutiae again, I wanted to send you all this astounding comparison I noticed.

Both of these maps show 3400-foot walks. pic.twitter.com/FtS0oSpuBj

One can quibble about hills, and placement of the dots. But he’s right that someone that tried to say that Convention Place serves Capitol Hill, or Avalon Station served the Junction, would rightly draw ridicule.

The development map d.p. attaches shows that “new Ballard” isn’t actually east of “old Ballard,” but instead to the north. A 14th station is simply farther away — not at the heart of coming density that will dwarf the existing old buildings. 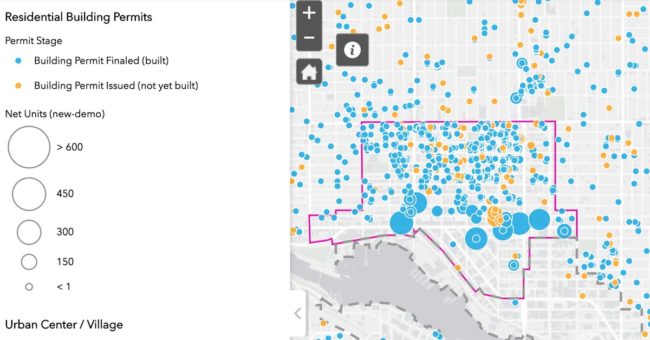 There are legitimate reasons to support 15th Ave over something further west. It eases bus integration* with points north, and makes a future line, to the north and east, cheaper. As Sound Transit has eliminated options to the west anyway, the choice is down to a station that sort supports some of the density in Ballard, and bus transfers, or one that does neither.

* Though bus integration is generally less effective than putting it where the density is.

126 Replies to “Ballard is Big, but Link Might Miss it Entirely”