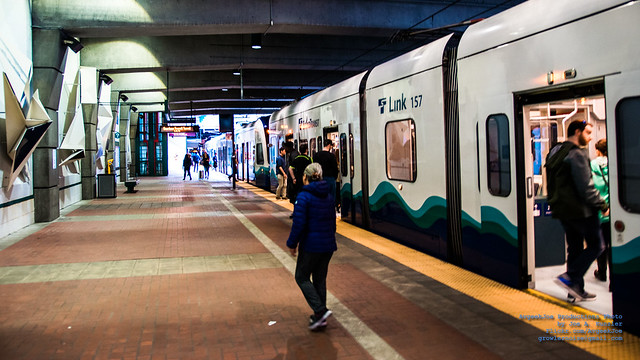 Like many transit agencies, Sound Transit predicts a constrained financial future and has cut transit service. Under Sound Transit’s initial 2021 Service Plan, Link would have continued its current operational pattern of 8 minute peak frequencies—stepping down to 15 minute and 30 minute frequencies—through 2021. In that document, the agency blames reduced peak hour demand for this proposal. Sound Transit has since backed away from this plan after collecting feedback. Nevertheless, a sole focus on reduced demand ignores the other consequences of infrequent service on Link. These consequences are not abstract; they are quantifiable. Ignoring them significantly and disproportionately reduces the value of the Link in Seattle. We should expect more effort to analyze the consequences of these reductions in much greater detail.

While ridership-based measurements, like Sound Transit’s citation of peak hour demand, are pervasive, they are quite limited. They are subject to errors and bias from sampling. More concerning, they tightly couple observed demand for transit with actual desire for transit. In doing so, they assert that demand for a transit route is a consequence of the area the route serves. They fail to consider that the underlying quality of transit service also drives use. Ridership-based measurements are logical to use when adding service: a crowded bus is a clear sign that more capacity is warranted. When used in reverse, they create cycles where low ridership drives a reduction in frequencies, making transit less practical and dissuading potential riders further. In reality, adoption of transit depends on both the needs of people served by transit and the qualities of the transit network that serves them. Unfortunately Sound Transit’s explanation of its service reductions only guesses at the future of the former while saying nothing of the latter.

Spontaneous Accessibility assesses the underlying quality of the transit network in a way that is largely agnostic to the decisions of present or potential riders. It focuses on a fundamental goal of transit: connecting locations in a reasonable amount of time. To do this, it considers a bounded area, such as a city, divided into a grid. It also sets a journey time limit. Then, for every combination of origin, destination, and starting time, it counts how many of these combinations correspond to a trip that can be made with walking and transit under the time limit. This is divided by the potential number of combinations to form the Spontaneous Accessibility ratio. Furthermore, this ratio can be broken down by each destination sector in the grid to establish a reach probability for areas of the map, allowing locations in the city to be compared. (Spontaneous Accessibility is described further in my paper in the 2018 Transportation Research Record).

To assess the impact of reduced Link service, consider these Spontaneous Accessibility computations, from late 2019 (chosen for being prior to both the COVID-19 service adjustments and Connect 2020) and late 2020, for the bounding rectangle of Seattle and a 30-minute maximum trip time. These compute the measurements using the schedules of King County Metro-operated service and a consistent walking model. The Spontaneous Accessibility ratios of .0821 and .0787 show a 4% decline in service quality, but the practical meaning of that 4% change is difficult to assess. Looking comparatively helps reveal the extent of the decline. The end of 2020 ratio is similar to the 2013 ratio of .0783. This is a transit network that predates the Rapid Ride E Line, the University Link extension, and the subsequent bus restructures. Spontaneous Accessibility corroborates that the 2020 network is clearly a diminished one.

The Spontaneous Accessibility calculations can be used reveal how special the Link is. While the aforementioned maps break the measurement down spatially, it is also possible to assess the impact of individual routes. Computing the measurement involves finding the best path of transit routes and walks for each of the reachable combinations of origin, destination, and starting time. It’s then possible to count up the appearances of each route across the best paths. Sorting the counts provides a rough ranking of which routes are most valuable to the network. In the 2019 data, of the nearly 150 billion combinations, just over 1 billion feature Link. It’s the top route, exceeding route 40 by a margin of just over 14 million. It’s impressive that the Link can hold this lofty position. In the area of the map it has 13 stops, compared to 54 for the northbound 40. Routes with a large number of stops have more opportunities to appear in the list of top routes, since more starting and ending locations will be near stops on the route. The Link’s combination of high frequency and relatively high speed overcome this, making it the most valuable transit resource in Seattle during 2019.

While King County Metro and Sound Transit have both reduced service, the Spontaneous Accessibility analysis highlights the disproportionate magnitude of the Link’s reduction. A member of around 768 million of 143 billion best paths, its losses exceed the combined reduction from the complete suspension of the routes 71, 22, 76, 29, 312, 355, and 9. Additionally it is no longer the top route. It has fallen out of the top three, trailing the E line, 40, and D Line. The E Line has a new stop at Harrison Street, which has caused its presence in the best paths to actually increase, muddling the comparison. The other two routes, however, have no confounding variables and have seen decreases. These decreases pale in comparison to the Link’s decrease of over 239 million paths. Link’s decrease in fact ranks second only to the route 65’s of nearly 257 million, which has lost all night service and stretched from 10 minutes to 15 all day. [1]

Aside from the Link and the route 65, no other route diminishes as much. The third greatest loss, that of the route 67, is over 77 million smaller. On the surface, there is not much to differentiateLink’s service reductions from those of King County Metro’s bus routes. Nevertheless, the same properties of the Link that make it a top contributor make its utility in the network sensitive to small adjustments in service.

A route moving down in the best trips ranking does not always indicate diminished transit quality in the areas that it serves. Perhaps the loss of Link service could be made up by combinations of other routes that also allow access to the same locations. While this would be lamentable given the infrastructural investment in the Link, it would mean that riders have alternatives.

Unfortunately for those riders, comparing the Spontaneous Accessibility measurements from 2019 and 2020 reveals that Link-adjacent locations have indeed suffered heavy losses in reachability. This map shows the difference in reach probability by sector of the grid. Clicking a sector or entering its number in the “Select Sector” control shows the exact reach probability and the shift in top routes serving the sector. While the map largely shows decreases across the board (with the increases mostly unrelated to frequency alterations) ranking these differences reveals the top diminished areas. The most diminished sector is 16012, located around 1st Avenue and King Street. This sector does not have a clear connection to the Link, or indeed to the service reductions at all. This sector’s change, and that of the sectors around it, is the result of an altered path for West Seattle buses that eliminated use of this stop.

While the top five reduced sectors are a part of this cluster, the next few are near Link stations or areas strongly connected to them. The sixth sector in the list, sector 22642, forms part of an area of reduction stretching from the University of Washington Link Station, along Pacific Street up to 15th Avenue. It is not until the 31st ranked reduction that there is a sector not in either of those two areas, but that sector, 17824, falls directly over the Capitol Hill Link Station. It isn’t until the 41st ranked sector, 28589, that reduction appears that is not a consequence of Link changes. The areas that see the largest reductions in service are indeed among the ones that the Link is intended to serve.

It’s understandable to reduce service to deal with financial constraints, and it is commendable that Sound Transit recognized the merit of feedback. Nevertheless, to solely cite a continued reduction in peak ridership as reasoning for reduced service is to fundamentally misunderstand what makes transit service valuable. A frequency reduction during a time of low ridership isn’t a matter of asking comparatively few people to wait a couple minutes longer. Reductions stack; a missed transfer can bring a trip length from reasonable to infeasible, reducing the size of the navigable world for those who are using transit. The Spontaneous Accessibility analysis reveals that Link’s position in the network makes it a critical resource to making trips within Seattle, and especially sensitive to reductions. While its present frequency reductions are consistent with those made to bus service, they have an outsized impact. That’s not to say its frequency must never change, but it is Seattle’s transit crown jewel, and decisions surrounding it consider its role int he network as a whole.

Matt Laquidara is a software developer by day who moonlights as an independent public transit planning researcher. His research paper, “Measuring Spontaneous Accessibility for Iterative Transit Planning”, was published in the 2018 Transportation Research Record, selected as best paper by the Transit Capacity and Quality of Service Committee, and awarded the Fred Burggraf Award for excellence in transportation research by researchers under 35.

[1] Even though the 65’s overnight service was infrequent, it’s likely a disproportionate contributor to the route’s presence in the best paths list. During the day when many routes are running, those routes might siphon best paths away from the 65. At night, the best path may involve a longer walk to a route 65 stop. Link, which often operates in the vicinity of many other routes, particularly through downtown, and has never had overnight service, still manages to approach the route 65’s reduction.

102 Replies to “How important is Link to the network?”