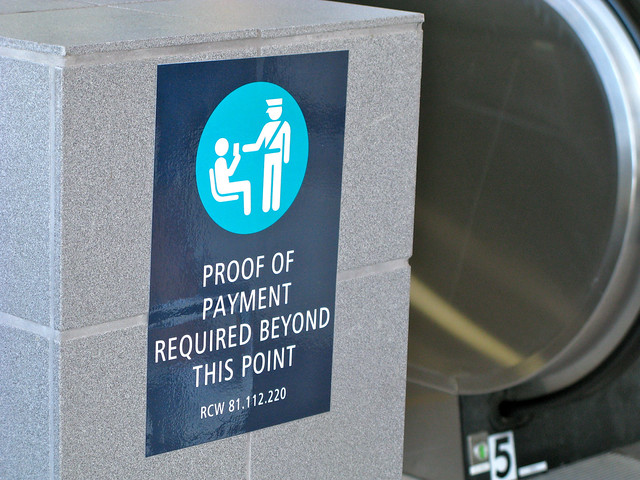 At its October 22 meeting, the Sound Transit Board heard proposals to reduce concession fares for Sounder and reduce the law enforcement footprint in fare enforcement.

In response to this feedback, and broad board settlement to meet the moment in decriminalization, ST is launching a “fare engagement ambassador” pilot program. These ambassadors will be agency employees rather than private security contractors. They will have new, less threatening uniforms, more emphasis on education and warnings, and less on infractions. Ambassadors will only call law enforcement for “other aggravating factors.”

Existing FEOs will decouple of fare enforcement and focus and security, which implies this will raise the agency’s costs overall.

The $124 fine goes to court fees, and can’t shrink without state action. Board members would like to get the courts out of it, but CEO Peter Rogoff is still looking for the magic solution: “what do we do, if not the courts?”

The new [Community Court] Chief Judge is not interested in partnering with us… No one is interested in putting a poor person through the court system. [There are] persistent fare violators who are not clearly economically distressed… Metro is on the same journey as we are… Folks who set up appointments for alternative resolution [with Metro], some 90% never show up, and then nothing becomes of those cases. Which is to say, there is no consequence for persistent violators… What does the community want for these cases?

Rogoff’s plan is to continue discussions with the community, and with Metro, until there is an alternative he can take to the Board.

In related news, the Board was positive about a proposal to make Sounder low-income, youth, senior, and disabled fares the same as they are for ST Express ($1.50, $1.50, $1, and $1, respectively). These fares currently range from $1.50 to $4.25, in keeping with generally higher fares on Sounder. Staff projects that this would have forfeit roughly $300,000 in annual revenue in 2019, or 1.7% of the Sounder total. This fare cut might raise Sounder by 20,000 per year, or 0.4%. A public comment period will begin later this month, and implementation could be as soon as March 1.